US political conventions, explained: Why we still have them and what will happen in 2020 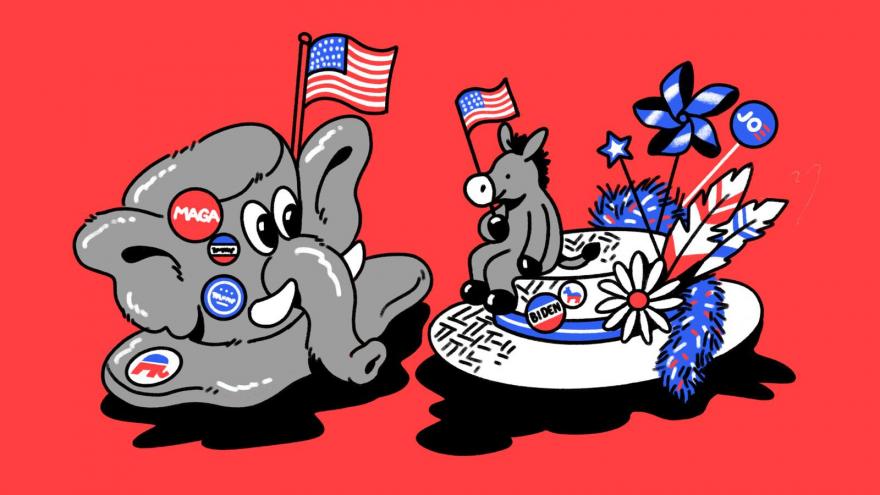 The quadrennial national US political conventions are scheduled, even in this time of Covid, to formally nominate each party's presidential candidate and settle on official party platforms for the general election.

(CNN) -- The quadrennial national US political conventions are scheduled, even in this time of Covid, to formally nominate each party's presidential candidate and settle on official party platforms for the general election.

CNN will have live coverage of both conventions every night, but this unprecedented year will see some major changes to the party gatherings.

I talked to Adam Levy, who oversees CNN's political research team, about what's different this year -- how things might play out, and whether these things are still important.

Our email conversation is below:

ZBW: My personal view is political conventions are a relic of a time when party bigwigs picked presidential nominees. Now, it's voters in primaries. Is there still a functional purpose for these things?

AL: TECHNICALLY, yes. Voters choose delegates when they go to the polls during the primaries who actually make the nominee official at the convention (after which, the parties submit the names to the states to put them on the ballot). Do we still need a multi-day lovefest for a candidate we already knew was going to be the nominee? That's definitely up for debate. I think the scaled-down versions of the conventions we're seeing this year due to the pandemic could have a lasting impact on the scale of future conventions, but I'm not quite ready to completely bet against a politico's love of a balloon drop.

How have they changed?

ZBW: How did conventions evolve from smoke-filled rooms with party bosses to the public shows we see today?

AL: People speaking out against them and demanding change. Smoke-filled rooms evolved from conventions without predetermined nominees that went on for multiple ballots. That hasn't happened in more than 50 years because voters didn't want party bosses deciding the presidential nominees.

Both parties have made changes to the system that began in earnest after 1968. Adding primaries instead of caucuses, creating more pledged delegates that reflect the people's votes, and public transparency all played a role in the system we have today.

What are they doing in place of fundraising and parties?

ZBW: Conventions are also schmoozy weeks full of fundraisers. How are campaigns making up for that spigot being turned off this year?

AL: Campaigns are getting creative this year. There are tele-rallies, online fundraisers and an even greater emphasis on social media campaigns. Everyone is learning as they go, and given the numbers both sides are posting, it seems that donors have been forgiving of this. In-person interactions will never completely go away -- there is a benefit to meeting someone in the flesh and hearing from them... especially when you're guarded by the Secret Service and are completely fortified every day.

Joe Biden spent decades empathizing with people on the trail, hearing their stories and promising to speak for them. Donald Trump thrives with an audience and channels their enthusiasm into his work. Those have been critical pieces of their political personas, and I expect they will want to get back to them as soon as safely possible.

Are there fights over party platforms this year?

ZBW: One of the less-covered but more interesting elements of a convention is the party platform. Is there anything you think people should know about party platforms this year?

AL: The Democratic platform is always a source of contention, and team Biden is furiously trying to ease some of that friction. Followers (and a significant amount of delegates) of Vermont Sen. Bernie Sanders have moved the party left since 2015. Hoping to avoid the fights at the 2016 convention, Biden's convention teams created "Unity Task Forces" to work with Sanders supporters to make policy recommendations for the platform committee.

While this won't soothe everyone, it was a real effort on Biden's part to reach out to Sanders voters and delegates. Normally, there would still be some sort of floor fight over the platform at the convention. It seems highly unlikely given the technological logistics of the Democratic convention. Perhaps a small upside to the all-virtual convention for Biden.

On the Republican side, as could be expected with an incumbent president, there aren't any changes this year. That caused a problem because the Republican National Committee voted to keep the 2016 platform that bashed the "current president," which was not Donald Trump when it was drafted in 2016. Either way, there won't be any significant changes from the GOP.

Where are these things happening?

AL: Democrats have pretty much moved entirely online, with only local delegates making an appearance in Milwaukee. Republicans will still conduct some business in Charlotte, but both are extremely scaled down. We still don't know where the President will accept his nomination -- he's floated the White House or Gettysburg as possible locales.

Why were Milwaukee and Charlotte originally chosen? Politics. The last time Wisconsin voted Republican in a presidential contest before 2016 was 1984. President Trump broke a 32-year streak, and now Democrats are working tirelessly to bring the Badger State back into the fold. North Carolina is a critical battleground state that voted for Obama in 2008 and Trump in 2016. The Tar Heel State is not only primed to pick the president, but both a Senate seat and the governor's mansion are up for grabs. The down-ballot races there will have a big impact on the future of the state. Republicans picking Charlotte originally showed that they take those threats seriously.

What surprises do you expect?

ZBW: Every convention has some weird or memorable moment. Al Gore kissing Tipper. Barack Obama stealing the show from John Kerry. The surprise of Sarah Palin. Clint Eastwood debating an empty chair. You've seen all the planned events. What's the one we'll be talking about years from now?

AL: Your examples show that unexpected moments can leave the strongest impressions. You never know who's going to give the most impactful speech or who will have a weird moment. That said, I am thoroughly hoping for a few purely 2020 moments during the conventions. A kid barging into the room during a lawmaker's speech, a dog relentlessly barking at the most inopportune time and of course, the speaker who forgets to turn themself off mute. Both parties are working hard to avoid that, but as conventions past have shown, the best-laid plans ...