US orders closure of Chinese consulate in Houston 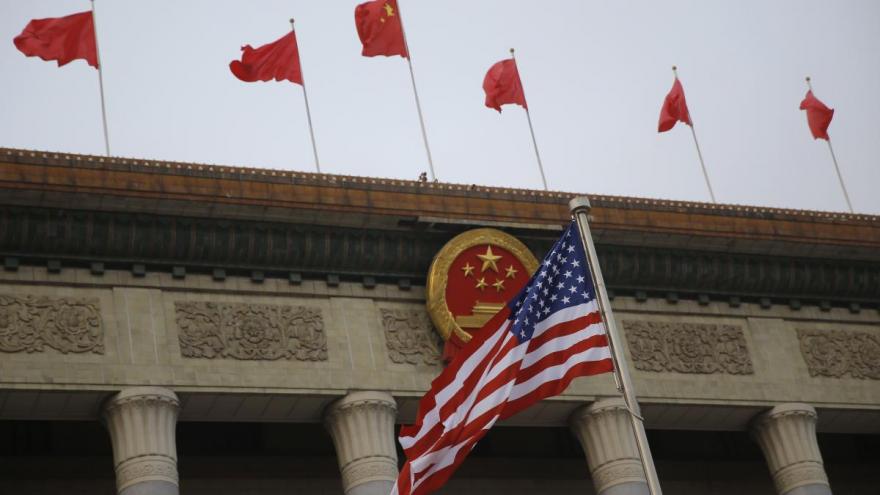 US orders closure of Chinese consulate in Houston. The image shows the U.S. flag and Chinese flags fly at a welcoming ceremony between Chinese President Xi Jinping and U.S. President Donald Trump November 9, 2017 in Beijing, China.

(CNN) -- The United States government has abruptly ordered China to "cease all operations and events" at its consulate in Houston, Texas, according to the Chinese Foreign Ministry, in what it called an "unprecedented escalation" in recent actions taken by Washington.

Late Tuesday evening, police in Houston said they responded to reports of smoke in the courtyard outside the consulate, located on Montrose Boulevard, in the city's Midtown area. Local media shared video of what appeared to be officials inside the compound burning documents.

US State Department spokeswoman Morgan Ortagus said the consulate was directed to close "in order to protect American intellectual property and Americans' private information" but did not immediately provide additional details of what prompted the closure. Chinese media reported that the consulate had been given 72 hours to close.

Relations between China and the United States have plummeted in the past year, amid an ongoing trade war, the coronavirus pandemic, and US criticism of China's human rights abuses in Hong Kong and Xinjiang.

A spokesperson for the State Department said in a separate statement that China "has engaged for years in massive illegal spying and influence operations" and that those "activities have increased markedly in scale and scope over the past few years."

The State Department has not clarified what, if any, particular incident triggered the US demand to close the embassy or when it made that demand.

US Secretary of State Mike Pompeo, who was just in Europe rallying leaders to take a harder line with Beijing and meeting with exiled Chinese dissidents, declined to offer details about the decision in remarks Wednesday. But the top US diplomat is set to deliver remarks on China on Thursday at the Richard Nixon Museum and Library in California.

Move comes a day after US charged alleged Chinese hackers

On Tuesday, US prosecutors charged two alleged Chinese hackers over a "sweeping global computer intrusion campaign" that they say was supported by the country's government and aimed at coronavirus treatment and vaccine research. The indictment also marks the first time that the US has accused the hackers of working on behalf of the Chinese government.

Chinese Foreign Ministry Spokesperson Wang Wenbin said the accusation was like a "thief accusing others to be the thief," in a press briefing on Wednesday, and charged that the US "has been engaging in the largest cyberattacks activities in the world."

In a statement posted on its official social media, the Chinese Foreign Ministry said the order to close the consulate was a "political provocation unilaterally launched by the US side, which seriously violates international law, basic norms governing international relations and the bilateral consular agreement between China and the US."

The Chinese Foreign Ministry condemned the decision and urged the United States to withdraw it.

The statement goes on to say the US has been "shifting the blame to China with stigmatization and unwarranted attacks against China's social system, harassing Chinese diplomatic and consular staff in the US, intimidating and interrogating Chinese students and confiscating their personal electrical devices, even detaining them without cause."

It added "China is committed to the principle of non-interference. Infiltration and interference is never in the genes and tradition of China's foreign policy."

When asked about the closures on Wednesday, Pompeo said US officials had set "our clear expectations for how the Chinese Communist Party is going to behave."

"And when they don't, we're going to take actions that protect the American people, protect our security, our national security, and also protect our economy and jobs," he said.

Ortagus's statement earlier Wednesday said, "The United States will not tolerate the PRC's (People Republic of China) violations of our sovereignty and intimidation of our people, just as we have not tolerated the PRC's unfair trade practices, theft of American jobs, and other egregious behavior. President Trump insists on fairness and reciprocity in US-China relations."

Republican Sen. Marco Rubio of Florida, the acting chair of the Senate Intelligence Committee, wrote on Twitter Wednesday that closing China's consulate in Houston "needed to happen," and claimed it is a "central node of the Communist Party's vast network of spies."

Sen. Angus King, an independent of Maine who caucuses with Democrats, told CNN's John Berman on "New Day" Wednesday he was not aware of any "recent intelligence of particular Chinese activities, either with regard to our elections, or the whole confrontation between our two countries -- theft of intellectual property" that may have driven the decision.

"There certainly is a good reason to confront China. My concern is, escalating this tension, is it really about confronting China, or does it have something to do with an election in four months?" King, a member of the Senate Intelligence Committee, said.

On Twitter, Hu Xijin, editor of the state-backed tabloid Global Times with strong ties to China's Communist Party, said that Beijing had been given 72 hours to close the consulate. "This is a crazy move," he added.

According to a statement on its website, the Houston consulate covers eight southern US states, including Texas and Florida, as well as Puerto Rico. It was the "was the first (consulate) to be established" in 1979 after the US and China established diplomatic relations, though a liaison office was already operating in Washington, DC, at that time.