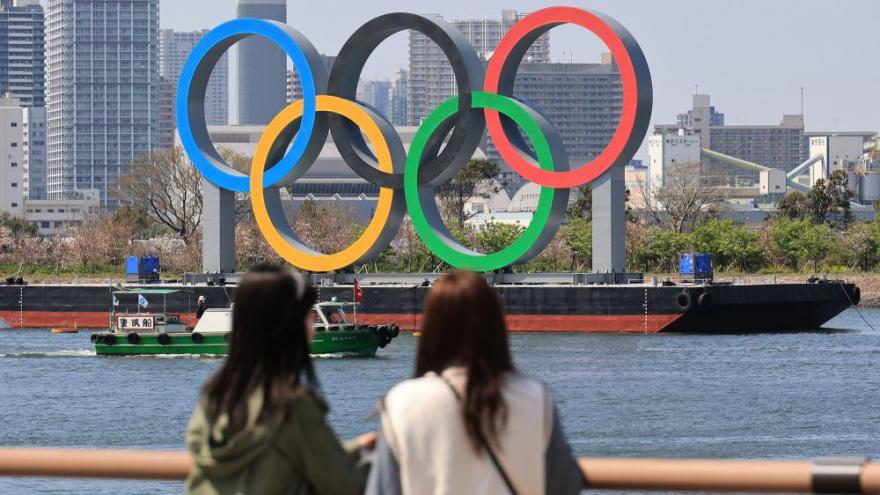 The United States Olympic and Paralympic Committee (USOPC) has announced that it will not sanction athletes who kneel for the national anthem at the Olympic trials. Olympic rings are displayed at Tokyo's waterfront Daiba in anticipation for the summer games.

(CNN) -- The United States Olympic and Paralympic Committee (USOPC) has announced that it will not sanction athletes who kneel for the national anthem at the Olympic trials in support of social or racial justice movements.

The committee released guidance for the athletes, providing examples of the demonstrations that are allowed.

Athletes may also advocate vocally for their causes.

Sarah Hirshland, CEO of the USOPC, commended the work of the group's Council on Racial and Social Justice.

"(The Council on Racial and Social Justice) also made it clear there is a deep desire for Team USA athletes to speak on these issues, and to lead as a positive force in our community," she said in a statement.

The guidance also underlined actions that are not permitted, such as defacing an American flag or engaging in racist or hate speech.

Hirshland said the committee will evaluate its guidance ahead of the 2021 Tokyo Games. The committee will also create opportunities through Team USA to promote athletes who do speak out and provide education through a town hall to create dialogue.

"While we support your right to demonstrate peacefully in support of racial and social justice, we can't control the actions others may take in response," Hirshland said. "I have confidence you'll make the best decision for you, your sport and your fellow competitors."

Most of the US Olympic trials will take place in June, after the Tokyo Olympics were postponed last year due to the Covid-19 pandemic.

Despite the USOPC's decision, it is unknown whether the International Olympic Committee, the organization that runs the Olympics, will allow demonstrations in Tokyo.

However, the USOPC announcement is significant in light of the history of Team USA at the Olympic Games and the recent history of sports in the US.

At the 1968 Mexico Olympics the photo of US athletes Tommie Smith and John Carlos on the podium with their fists raised after winning the 200-meter race became an iconic symbol of the struggle for racial equality.

The entire Olympic organization, including the US Olympic Committee, condemned Smith's and Carlos' podium actions 53 years ago.

The runners and their families were kicked out of the Olympics, suspended by their sport's national governing body and received hate mail, death threats and continued criticism for their actions.

"They had the most to lose and they made the most audacious movement," historian Amy Bass told CNN during the 50th anniversary of the moment.

More recently, in 2016, Colin Kaepernick started a movement of kneeling during the national anthem before NFL games to bring awareness to racial injustice.

In 2018, the NFL banned on-field kneeling during the national anthem, but the practice soon spread to other sports.

In 2020, in the wake of George Floyd's death, the NFL reversed its ban. At the time, Commissioner Roger Goddell said that the league was "wrong for not listening to NFL players earlier and encourage all to speak out and peacefully protest."

In February, US Soccer ended a ban on players kneeling during the national anthem, with more than 70% of members of the ruling body voting to scrap the policy.