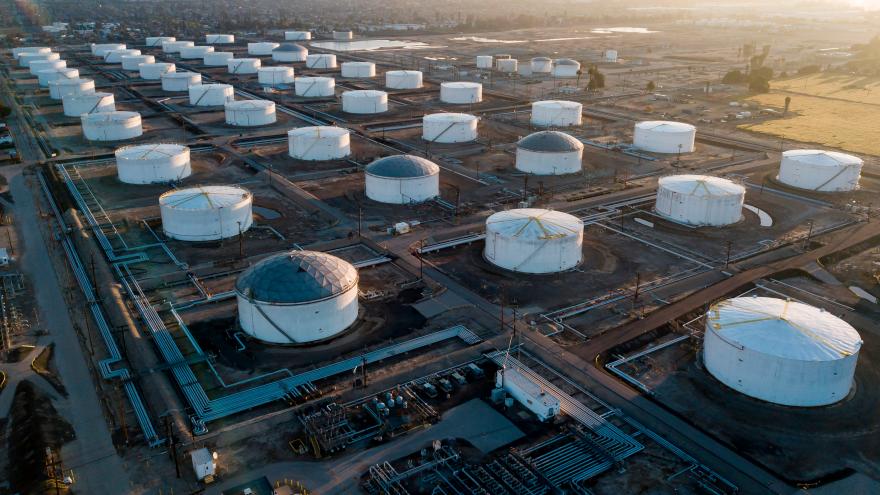 (CNN) -- Oil is back, thanks to a strange brew of vaccines, economic optimism and a wintry mix in the Deep South.

A rare bout of winter weather in Texas helped catapult US oil above $60 a barrel for the first time since January 2020. Snow fell as far south as Brownsville, Texas, where measurable snow has only occurred on two days since records began in 1898.

Temperatures in the Permian Basin, the fracking capital of the United States, plunged below zero. Snow, wind and ice knocked power out for much of Texas.

"We are carefully monitoring weather conditions and will resume normal operations as soon as it is safe to do so," a Motiva spokesman said.

The long road back

The last time the price of West Texas oil settled higher than $60 was January 7, 2020. That was just as reports of coronavirus infections began to spread.

Just three months later, as travel came to a standstill and demand for oil fell through the floor, an ill-timed price war between Russia and Saudi Arabia resulted in a massive supply glut. On April 20, oil went negative for the first time, plummeting to $-40.32 and settling below zero the next day before bouncing back.

Since then, prospects for oil have decidedly improved: The American economy grew at a record pace in the third quarter of 2020, and air travel hit pandemic records during Thanksgiving and Christmas.

Oil steadily rose through August until sitting in a holding pattern near $40 for several months. But since Election Day, oil has rallied again, surging 64%, as prospects for economic stimulus and vaccines have grown.

The higher oil prices could eventually send gas prices, which have been surging in recent months, even higher. Although the two commodities aren't directly correlated, oil is the primary component of gasoline and can help gas prices trade higher or lower.

A gallon of gas rose to $2.51 on average in the United States Monday, according to AAA. That's 7 cents higher than a year ago and up 14 cents from last month. Gas prices bottomed out at $1.77 a gallon in April.

But the rebound in energy prices might not be all about the expectation that demand will return. Travel has rebounded but remains a pittance compared to what it was before the pandemic, and business travel could take years to return to normal. Commutes are probably dead forever for millions of workers who will continue to work from home long after Covid-19 is in the rear-view mirror. And oil companies are betting big on a future dominated by green energy.

BP, Shell and Total unveiled pledges to cut greenhouse-gas emissions from their own operations to net zero by 2050, and their CEOs have spoken about the pressing need to develop new lines of business to offset reduced demand for oil. Exxon announced it would invest $3 billion on technology that reduces emissions through 2025. And President Joe Biden has made fighting climate change a top priority. He announced that the United States would rejoin the Paris climate accord on his first day in office, and quickly halted new oil and gas leases on federal lands.

Although oil demand could ultimately rebound — perhaps for years — all those factors weighing on fossil fuels suggest much of oil's bounce-back could be part of the asset bubble fueling the massive run-up in stocks, other commodities and digital currencies like bitcoin.

Only time will tell to determine how much room oil has left to run. In the meantime, investors are pleased, and drivers may be paying more at the pump.