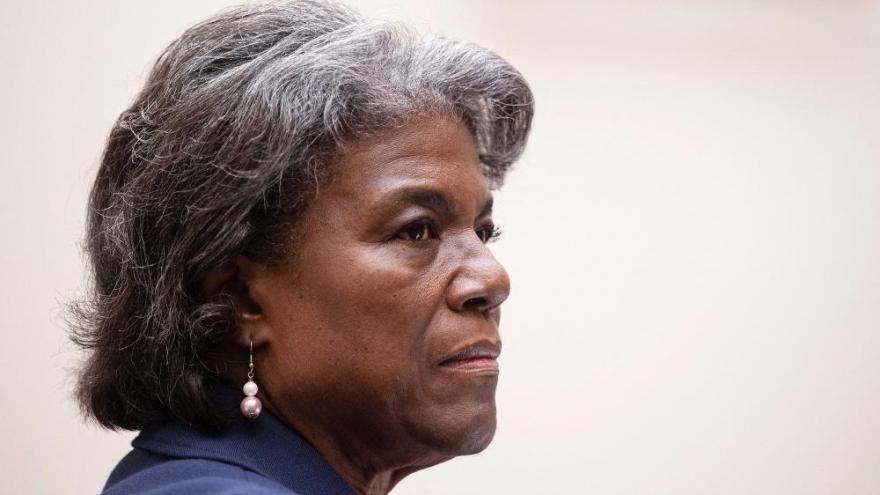 The United States is officially a member of the controversial United Nations Human Rights Council again. US Ambassador to the United Nations Linda Thomas-Greenfield is shown here on Capitol Hill in Washington, DC, on June 16, 2021.

The US was elected on Thursday in an uncontested ballot of member countries by the UN General Assembly. President Joe Biden had said he would return the US to the Geneva-based organization. Cameroon, Eritrea and the United Arab Emirates also joined the Human Rights Council on Thursday despite concerns over their own domestic records voiced by human rights organizations.

The US got 168 votes, a slight drop from what other countries received to get three-year terms. The UN Human Rights Council describes itself as "an inter-governmental body within the United Nations system responsible for strengthening the promotion and protection of human rights around the globe and for addressing situations of human rights violations and make recommendations on them."

Biden on Thursday applauded the US' election to the council, saying in a statement, "I am grateful for the support of nations from around the world for our campaign, and I look forward to the United States once more being a constructive voice that works to help push the Human Rights Council to live up to its mandate and to protect the values we hold dear for all people."

US Ambassador to the UN Linda Thomas-Greenfield said in a statement celebrating the American reentry to the council that the US' initial efforts on the council will focus on Afghanistan, Myanmar, China, Ethiopia, Syria and Yemen. She said the US' goals will be to "stand with human rights defenders and speak out against violations and abuses of human rights."

"More broadly, we will promote respect for fundamental freedoms and women's rights, and oppose religious intolerance, racial and ethnic injustices, and violence and discrimination against members of minority groups, including LGBTQI+ persons and persons with disabilities," she continued, adding that the US "will press against the election of countries with egregious human rights records and encourage those committed to promoting and protecting human rights both in their own countries and abroad to seek membership."

Notably, Thomas-Greenfield said the US "will oppose the Council's disproportionate attention on Israel, which includes the Council's only standing agenda item targeting a single country. "

Then-US Ambassador the UN Nikki Haley accused the council of bias against Israel and failing to hold human rights abusers accountable when the US left the panel in 2018.

"For too long," Haley said in 2018, "the Human Rights Council has been a protector of human rights abusers, and a cesspool of political bias."

"Human rights abusers continue to serve on, and be elected to, the council," she said. "The world's most inhumane regimes continue to escape its scrutiny, and the council continues politicizing scapegoating of countries with positive human rights records in an attempt to distract from the abusers in its ranks.

Biden's Secretary of State, Antony Blinken, announced the US would reengage with the council in February.

There are 47 member states on the council, and current members include countries that have been accused of grave human rights abuses such as China, Russia and Venezuela.

In a statement issued Thursday, Blinken recognized the US readmission into the group and acknowledged that the council "suffers from serious flaws, including disproportionate attention on Israel and the membership of several states with egregious human rights records."

"Together, we must push back against attempts to subvert the ideals upon which the Human Rights Council was founded, including that each person is endowed with human rights and that states are obliged to protect those rights," Blinken added.

The council has long been criticized for including countries with tarnished records on protecting human rights in their own territory. Ahead of Thursday's vote at the UN, the non-governmental organization Human Rights Watch warned that a noncompetitive election "virtually guarantees seats for candidate countries with abysmal rights records," calling on UN member countries to refrain from voting for Cameroon, Eritrea, United Arab Emirates specifically among others.

And the American Civil Liberties Union urged the Biden administration to prioritize human rights in domestic policy following the US' reelection to the council.

"President Biden during his presidential campaign promised to reestablish relations with international partners and center human rights at home and abroad under his administration and to lead by the power of example," the ACLU statement said. "However, despite the election to the council, the United States' human rights record remains very problematic, not least because the country hasn't yet ratified or fully implemented key international human rights treaties and failed to implement recommendations made by regional and global human rights bodies."

The US' reelection to the Human Rights Council is the latest effort to restore US standing on the global stage through involvement in multilateral organizations and treaties spurned by the Trump administration. Biden reversed the US departure from the World Health Organization and the Paris climate accords. The President said in his Thursday statement that he looks forward to participating in a virtual summit for democracy in December.

This story has been updated with a statement from President Joe Biden.