US Navy will name a ship after Ruth Bader Ginsburg 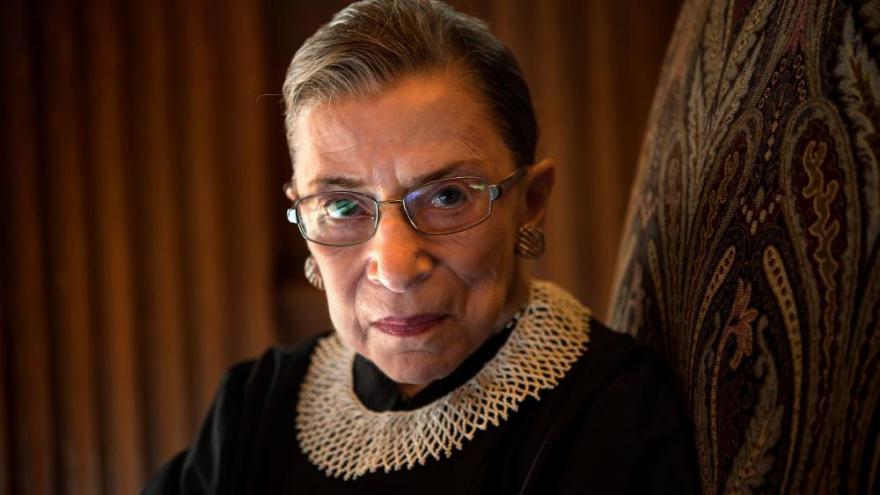 Supreme Court Justice Ruth Bader Ginsburg, celebrating her 20th anniversary on the bench, is photographed in the West conference room at the U.S. Supreme Court in Washington, D.C., on Friday, August 30, 2013.

(CNN) -- The late Justice Ruth Bader Ginsburg served more than two decades on the US Supreme Court, developed a rock star status and drew standing ovations when she spoke in public. Now the late "Notorious R.B.G." will add another entry to her long list of accomplishments.

The Navy will name a ship after her.

On the final day of women's history month, the Navy announced that the USNS Ruth Bader Ginsburg will be a John Lewis-class replenishment oiler ship, designated T-AO 212.

"It is my absolute honor to name the next [replenishment oiler] after the Honorable Ruth Bader Ginsburg," said Navy Secretary Carlos Del Toro in a statement. "She is a historic figure who vigorously advocated for women's rights and gender equality."

Ginsburg, who died in September 2020 at the age of 87 due to complications from metastatic pancreas cancer, had served as the senior member of the Supreme Court's liberal wing, delivering progressive votes on some of the most polarizing social issues of the day, including abortion rights, same-sex marriage, voting rights, immigration, health care and affirmative action.

She was the second woman to serve on the US Supreme Court behind Justice Sandra Day O'Connor.

The John Lewis-class replenishment oiler ships, used to refuel carrier strike groups at sea, are traditionally named after those who fought for civil and human rights. Rep. John Lewis, who died in July 2020 at the age of 80, was a towering figure in the civil rights movement, challenging segregation and leading the march for voting rights in Selma, Alabama. The second ship in the class is named for Harvey Milk, the first openly gay man to be elected to public office in California, became a leader in the fight against anti-gay initiatives.

Other ships in the class are named for Earl Warren, Robert F. Kennedy, Lucy Stone, Sojourner Truth and Thurgood Marshall.

"She is instrumental to why we now have women of all backgrounds, experiences and talents serving within our ranks, side by side with their male Sailor and Marine counterparts," said Del Toro.

Del Toro also named Ginsburg's daughter, Jane Ginsburg, as the ship's sponsor. The daughter of the famous jurist will participate in the milestones for the ship, such as its keel laying ceremony, christening and commissioning.