US Navy to evacuate 5,000 as military preps for Hurricane Irma 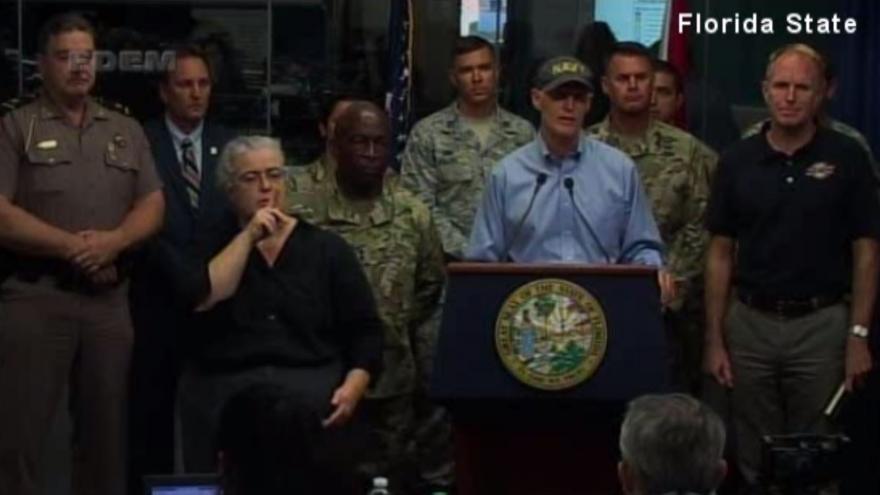 (CNN) -- The US military has ordered the evacuation of over five thousand personnel from a Naval Air Station in Florida in preparation for Hurricane Irma.

Irma is now a Category 5 storm and one of the strongest ever recorded in the Atlantic.

Currently, it is threatening to slam into Caribbean islands including Puerto Rico and the Virgin Islands with "potentially catastrophic" force on Wednesday, the National Hurricane Center said.

The military is braced for it to hit the US mainland and the current forecast suggests it could strike Florida over the weekend.

More than 5,000 active duty service members, civilians and their families based at Naval Air Station Key West have received mandatory evacuation orders, according to US Navy officials. The officials familiar with the evacuation plan say approximately 50 to 60 personnel will stay to man essential functions at the installation.

The Commander of the US Navy Region Southeast ordered the "mandatory evacuation of non-essential personnel and dependents from NAS Key West to safe haven within 300 miles of Atlanta, Georgia," according to Navy spokesman Bill Dougherty.

Navy officials tell CNN that aircraft, including fixed-wing planes and helicopters will be moving inland from Jacksonville and Mayport, Florida.

Submarines are preparing to evacuate or have been evacuated from Naval Submarine Base Kings Bay in Georgia, according to several Navy officials. In the coming days, other Navy installations may be ordered to evacuate.

Dougherty said Naval Station Guantanamo Bay, Cuba, will shelter in place for the storm as it passes north of Cuba.

Currently, 41 detainees are being held at Guantanamo.

The USS Iwo Jima and USS New York are due to leave Mayport, Florida as early as Tuesday and head to Norfolk to load up with disaster supplies. They will be on standby for any request for assistance following Hurricane Irma, according to two US Navy officials.

The USS Kearsarge and USS Oak Hill, which were headed to provide relief in the aftermath of Hurricane Harvey, are staying off the east coast of southern Florida for the next few days -- out of the path of Irma -- awaiting a decision as to whether they will they proceed to Texas or be ready to help with Irma, according to a military official.

The US Air Force is preparing plans to "relocate the majority of F-16 aircraft from Homestead Air Reserve Base in southern Florida," spokesman Col. Patrick Ryder said.

The 53rd Weather Reconnaissance Squadron based at Keesler Air Force Base, Mississippi, "commonly known as the Hurricane Hunters," is scheduled to fly later this week to help monitor the storm's development, he added.

Ryder also told CNN that Air Force search and rescue teams that were assisting in Texas have "returned to their home stations to recover and prepare for a potential response to Hurricane Irma."

Correction: This story has been updated to reflect the fact the Navy did not order contractors at Naval Air Station Key West to evacuate.