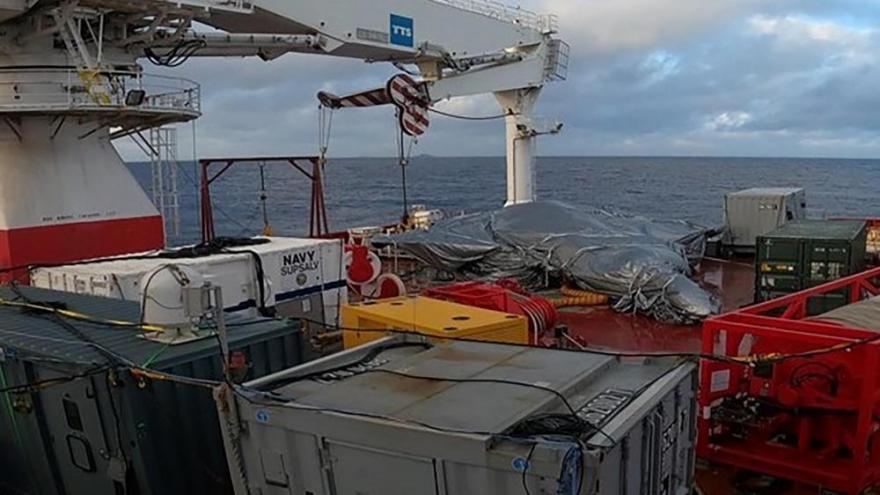 US Navy service members recover the wreckage of a military aircraft from the bottom of the South China Sea on March 2.

(CNN) -- The US Navy on Wednesday recovered from the bottom of the South China Sea the wreckage of a US military stealth fighter jet that crashed into the deck of a US aircraft carrier in January, the US Navy's 7th Fleet announced in a news release Thursday.

The F-35C crashed into the ocean after failing to make a successful landing on the USS Carl Vinson, while conducting "routine flight operations" on January 24, the release said.

In order to retrieve the wreckage of the military aircraft from "approximately 12,400 feet" deep, a team of US Navy service members used a "remotely-operated vehicle" called the CURV-21 to attach "specialized rigging and lift lines to the aircraft" at the bottom of the ocean, the release said.

After attaching the rigging and lift lines, the crane on the diving support construction vessel used to recover the aircraft "lowered to the seafloor and connected to the rigging." Once attached, the team lifted the aircraft to the ocean's surface and put it on the vessel to transport it, the release said.

"The aircraft will be delivered to a nearby military installation to aid in the ongoing investigation and evaluated for potential transport to the United States," the release said.

It took the team 37 days to recover the wreckage. It included members of the US 7th Fleet Task Force 75 and the Naval Sea Systems Command's Supervisor of Salvage and Diving. They used "the diving support construction vessel Picasso" to retrieve the wreckage.

Seven people were injured, including the pilot, who ejected from the plane, and six others aboard the carrier during the incident in January when the jet crashed. The $100 million fighter jet is the newest in the Navy fleet.

After the crash, the US Navy said it planned to retrieve any remnants of the aircraft from the ocean. The F-35C contains some of the Navy's most advanced technology, and the analysts said Washington would want to keep it out of Beijing's hands.

However, the Chinese Foreign Ministry said it was aware that a US Navy stealth fighter had crashed in the South China Sea but "had no interests in their plane."

"We advise [the US] to contribute more to regional peace and stability, rather than flexing force at every turn in [the South China Sea]," Chinese Foreign Ministry spokesperson Zhao Lijian said.

Videos of the crash emerged shortly after it happened, showing the aircraft bursting into flames as it struck the flight deck of the USS Carl Vinson.

Shortly after the crash, Navy officials described the damage to the Carl Vinson as superficial and said it quickly resumed normal operations.