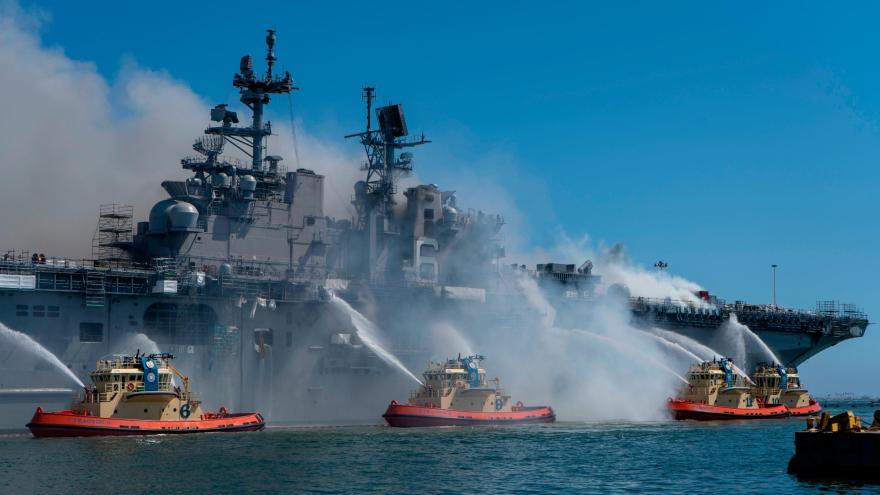 (CNN) -- The US Navy punished more than 20 sailors for the four-day fire that destroyed the USS Bonhomme Richard as the amphibious warship sat at port in San Diego in July 2020, the Navy announced Friday.

The Consolidated Disposition Authority, which decides upon punishments, was led by Admiral Samuel Paparo, the commander of US Pacific Fleet.

Vice Admiral Richard Brown, the retired officer who was the commander of US Pacific Fleet at the time, received a Secretarial Letter of Censure from Navy Secretary Carlos Del Toro.

Brown "failed to identify and mitigate against the lack of oversight that contributed to the loss of the ship," wrote Del Toro in the letter, criticizing Brown for not ensuring sailors in the command were properly trained and ready.

The CDA also handed down a number of nonjudicial punishments and other actions taken against sailors as a result of the investigation into the fire. The fire itself forced the Navy to scrap the billion dollar ship. The Bonhomme Richard was in port for upgrades that would have allowed it to carry Lockheed Martin F-35B fighter jets.

The Navy's actions do not affect the ongoing criminal case against Seaman Apprentice Ryan Mays, who is accused of arson and hazarding a vessel. Mays was a member of the ship's crew at the time of the fire. Mays' lawyer maintains his client's innocence.

"Losing Bonhomme Richard to this fire was preventable," said Vice Chief of Naval Operations Admiral William Lescher. "We are making significant changes in the way the Navy learns and leads so that this does not happen again."

In October, a Navy investigation found the fire that destroyed the ship was the result of a series of systemic failures, including a failure to maintain the ship, ensure adequate training, provide shore support, or carry out oversight.