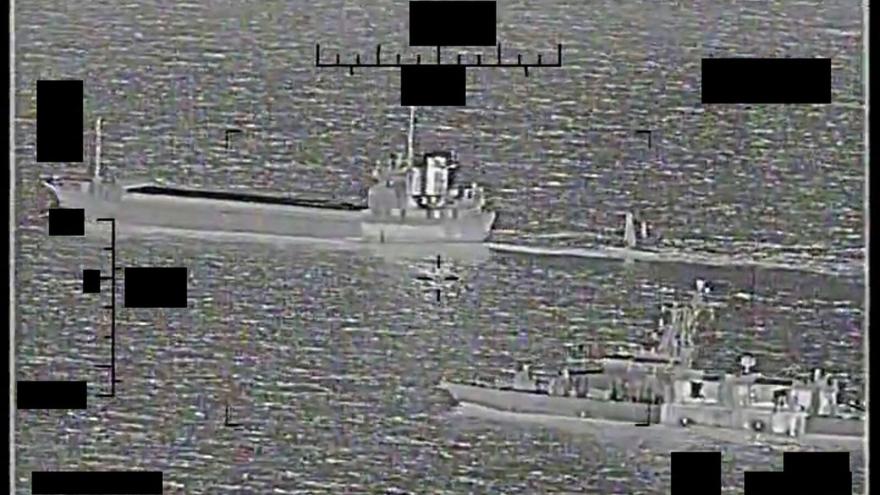 The US Navy prevented an Iranian ship from capturing an American maritime drone in the Arabian gulf on August 29 into August 30 local time in what a senior US commander called a "flagrant" and "unwarranted" incident.

(CNN) -- The US Navy prevented an Iranian ship from capturing an American maritime drone in the Persian gulf overnight Monday into Tuesday local time in what a senior US commander called a "flagrant" and "unwarranted" incident.

A US Navy patrol coastal ship, USS Thunderbolt, was "operating nearby and immediately responded," the Navy said. After the Iranians attached a line to the maritime drone, US forces in the area communicated directly with the Iranians to say they wanted the drone back, a US defense official said.

The US Navy patrol boat then moved closer to the maritime drone, and US 5th Fleet launched an MH-60S Sea Hawk Helicopter from Bahrain and positioned moved it above the drone, the release and a US defense official said.

After the US responded with both the coastal ship and Sea Hawk helicopter, the Iranian vessel disconnected the towing line from the US drone and departed the area four hours later, the release said.

The US Navy then resumed operations "without incident," the release added.

The incident comes at a critical time in relations between Iran and the US. Negotiations to revive the Iran nuclear deal are at a sensitive stage and US officials had voiced some optimism around the latest efforts. However, they have stressed that gaps remain between the two sides.

Vice Adm. Brad Cooper, commander of US Naval Forces Central Command, US 5th Fleet and Combined Maritime Forces, called the IRGCN's actions "flagrant, unwarranted and inconsistent with the behavior of a professional maritime force," in a statement about the incident.

"U.S. naval forces remain vigilant and will continue to fly, sail and operate anywhere international law allows while promoting rules-based international order throughout the region," Cooper said in the statement.

Gen. Michael "Erik" Kurilla, Commander of US Central Command which oversees the US military presence in the Middle East, reacted strongly, saying Iran's actions were illegal.

"The professionalism and competence of the crew of the USS Thunderbolt prevented Iran from this illegal action," Kurilla said in a statement. "This incident once again demonstrates Iran's continued destabilizing, illegal, and unprofessional activity in the Middle East."

The maritime drone that the IRGCN attempted to take is "US government property and equipped with sensors, radars and cameras for navigation and data collection," the release said. The drone "does not store sensitive or classified information," the release added.