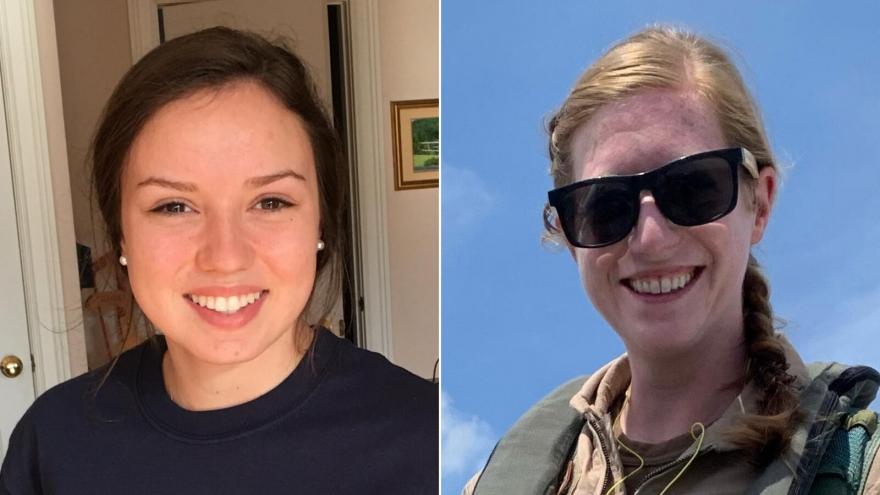 The US Navy identified the two-person aircrew killed in a crash Friday in Foley, Alabama, as US Coast Guard Ensign Morgan Garrett (left) and US Navy Lt. Rhiannon Ross.

(CNN) -- The US Navy has identified the two-person crew killed Friday when a training aircraft crashed in a small town outside Mobile, Alabama.

In a news release Sunday, the Navy identified the victims as Navy Lt. Rhiannon Ross, 30, from Wixom, Michigan, and 24-year-old US Coast Guard Ensign Morgan Garrett of Weddington, North Carolina.

Ross was an instructor pilot, the Navy statement said, while Garrett was identified as a student aviator.

"Their spirit, friendship, and devotion to their country will not be forgotten," the Navy statement said.

Ross and Garrett took off in a Navy T-6B Texan II trainer aircraft from Naval Air Station Whiting Field in Milton, Florida, on Friday for a routine training flight, the Navy said.

The aircraft crashed around 5 p.m. CT (6 p.m. ET) in a residential area of Foley, Alabama, about 30 miles southeast of Mobile by air and about 45 miles from NAS Whiting Field.

No civilians were injured in the crash, the Navy said Sunday. The incident is under investigation by the Navy and local authorities.

On Saturday, Chairman of the Joint Chiefs of Staff Gen. Mark Milley expressed his condolences to Ross' and Garrett's families, saying in a tweet, "Today, we mourn the loss of our two fallen Shipmates who perished in yesterday's T-6B training crash in Foley, AL. Our thoughts and prayers go out to their families and our @USNavy teammates."