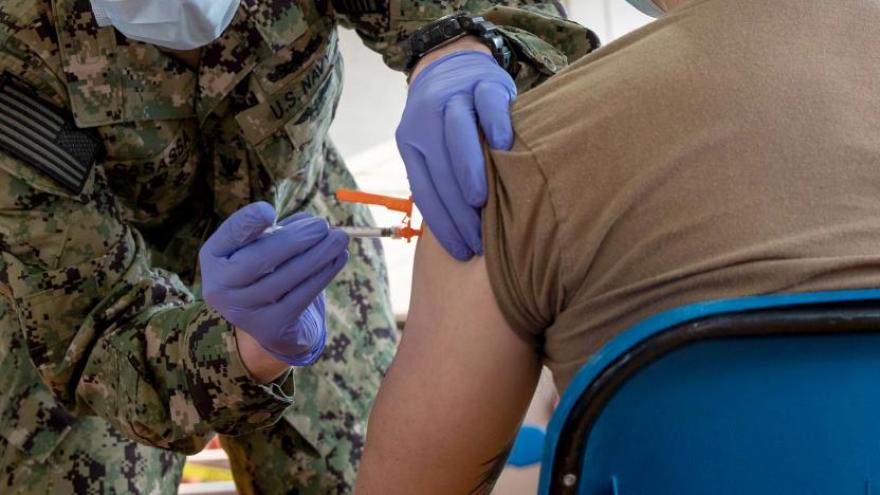 A hospital corpsman administers a Covid-19 vaccine aboard Naval Station Norfolk, on April 8, 2021. The US Navy said Wednesday that it has discharged 240 service members for refusing the vaccine.

(CNN) -- The US Navy said Wednesday that it has discharged 240 service members for refusing to get the Covid-19 vaccine as required by the Pentagon's vaccine mandate.

A majority of the service members, 217, were active duty, and one was a US Navy Reserve member, according to a Navy news release. All of those service members received honorable characterizations for their discharges from service, meaning they are still eligible to receive veteran benefits.

Fewer than two dozen -- 22 of the 240 -- were discharged while still undergoing training within their first 180 days of active-duty service.

In the Reserves, the Navy has granted nine temporary medical exemptions and nine administrative exemptions to the mandate.

More than 8,000 Navy service members remained unvaccinated against Covid-19 as of Wednesday, according to the release.

The Navy's deadline for its active-duty members to be fully vaccinated against the coronavirus was November 28, 2021. It gave Reserve Navy members until December 28, 2021, to do so.

The US Army, which is the largest service, just last week announced it will begin separating soldiers from service who refuse vaccination.