US moves closer to sending asylum-seeking migrants to Honduras 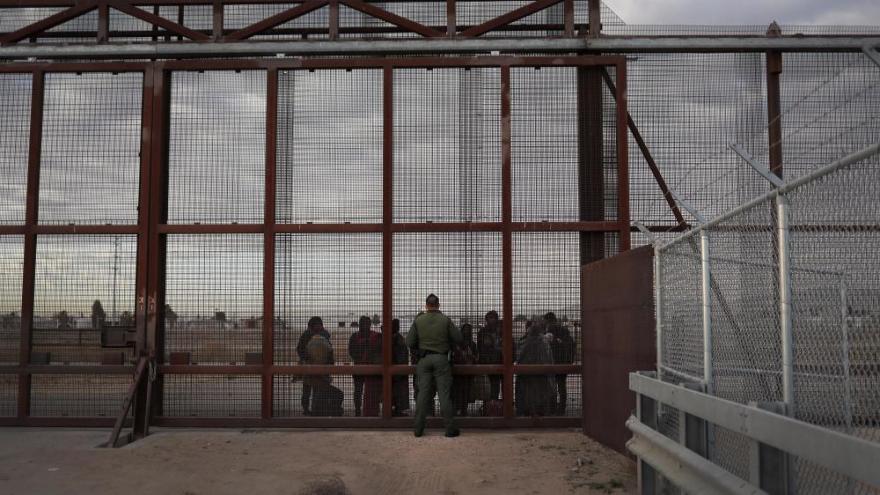 The Trump administration is pushing to implement an agreement with Honduras that would allow the US to send some asylum-seeking migrants to the Central American country. In this photo a US Border Patrol agent speaks with Central American immigrants at the US-Mexico border fence in El Paso, Texas.

(CNN) -- The Trump administration is pushing to implement an agreement with Honduras that would allow the US to send some asylum-seeking migrants to the Central American country.

Acting Homeland Security Secretary Chad Wolf will travel to Honduras this week to try to secure progress on the deal, which was reached in September, sources told CNN.

The agreement with Honduras, which was signed by Wolf's predecessor, Kevin McAleenan, is the latest move by the Trump administration to force asylum-seeking migrants who have arrived in the United States to seek humanitarian protection elsewhere. The US struck similar accords with Guatemala and El Salvador, but so far only the deal with Guatemala has been implemented.

Wolf will travel Wednesday to Honduras for a bilateral meeting on regional migration and security, according to Department of Homeland Security spokeswoman Heather Swift, who added that the US continues to "make progress on a joint implementation plan."

"Honduras has been a strong partner to the US in the region and negotiations have been going well," said Swift.

Earlier this week, the Trump administration said it will start deporting some Mexican asylum seekers to Guatemala to claim asylum there. Previously, only Salvadorans and Hondurans were subject to these types of deportations.

Mexico's Foreign Ministry rejected the proposal in a statement Monday night, saying the government of Mexico will work alongside state and local authorities to "offer better options to Mexicans that could be affected by this provision."

The regional accords have also received pushback from immigrant advocacy groups, who argue that they undermine the US asylum process and risk putting migrants in harm's way.

The State Department travel advisory for Honduras warns against traveling to the country because of crime.

"Violent crime, such as homicide and armed robbery, is common," the advisory reads. "Violent gang activity, such as extortion, violent street crime, rape, and narcotics and human trafficking, is widespread."

Over the past year, the administration has rolled out a series of policies intended to curtail people from claiming asylum in the United States. Many of those changes targeted Central Americans, who were increasingly coming to the US-Mexico border to claim asylum.

However, as the number of Central Americans arriving at the US southern border declined in recent months, the administration has become increasingly concerned with an increase in Mexican nationals illegally crossing into the US.

Last month, acting Customs and Border Protection Commissioner Mark Morgan said the US was also working with Honduras to accept Mexican nationals as a part of the asylum deal.

During the height of the migration crisis last May, US Border Patrol on the Southwest border arrested 132,856 people, primarily family members from the Northern Triangle countries of Guatemala, El Salvador and Honduras.