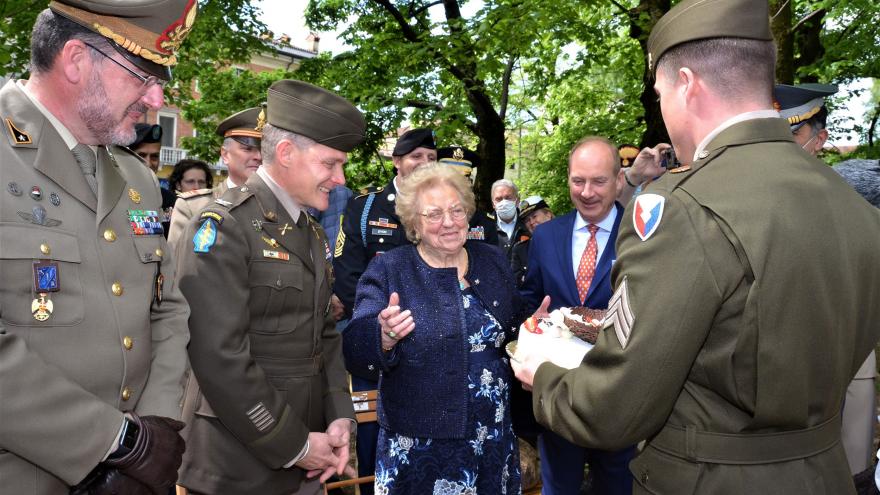 (CNN) -- The US military returned a birthday cake to an Italian woman, exactly 77 years after American soldiers fighting in her local village ate the original gateau that was made for her 13th birthday.

Sgt. Peter Wallis and Col. Matthew Gomlak presented Meri Mion with an icing-covered cake topped with fresh fruit on Thursday, according to the US army's official website.

The ceremony took place ahead of Mion's 90th birthday on April 29, and was hosted by Italian officials at Giardini Salvi, a park in the heart of Vicenza, Italy.

On April 28, 1945, US troops from the 88th Infantry Division fought against German soldiers in the northeastern Italian city.

Mion was barely a teenager when the battle migrated to her village of San Pietro. As German soldiers opened fire near her farm, she hid with her mother in the attic.

When she woke up the next morning, American troops had taken the freshly-baked birthday cake her mother had left for her on their window sill.

At least 19 US troops were killed or injured during the battle, and several US tanks were obliterated. Afterward, local residents in Vicenza forged ties with the US military, greeting soldiers with bread and wine.

'I will never forget'

Military staff have been collaborating with the US National Archives to source vintage combat film and imagery from the fighting that occurred in the city.

The footage, which was presented at the ceremony, also documents the friendship between the US army and residents of Vicenza after the fighting slowed down.

"That warm welcome by the people of Vicenza continues to this day," said Gomlak, a commander of the US Army Garrison in Italy.

Speaking about Mion's reaction to her gateau being stolen after the initial joy of her birthday, he added: "Her happiness turned into disappointment later when the resourceful American soldiers made off with her birthday cake."

"It makes me feel great to give her the cake," said Wallis, a military police soldier.

Mion wiped tears from her eyes as hundreds of onlookers including US and Italian soldiers, veterans, police and local residents watched the emotional exchange.

"Tomorrow, we will eat that dessert with all my family remembering this wonderful day that I will never forget," Mion said.