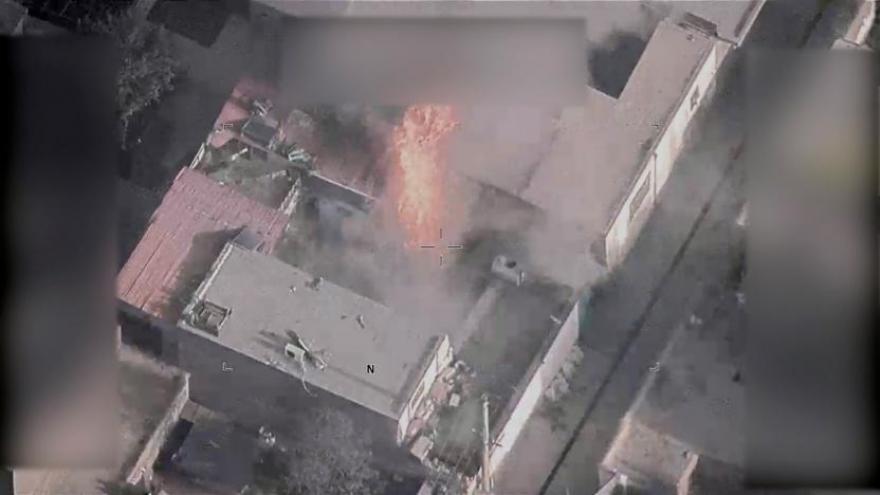 This image from video, released by the Department of Defense, from video footage, shows a fire in the aftermath of a drone strike in Kabul, Afghanistan on August 29, 2021, that killed 10 civilians.

(CNN) -- The US military released videos Wednesday of the botched August 29 drone strike in Kabul that killed 10 Afghan civilians, including seven children.

The newly released videos show the view from above Kabul as the military tracked a white Toyota Corolla through parts of the city, believing that it was an ISIS-K car laden with explosives and building a case for targeting it with a preemptive strike.

The Pentagon defended the strike at first, claiming it had killed an ISIS-K operative planning an imminent attack on US forces during the final days of the evacuation and withdrawal from Afghanistan. Only three days earlier, an ISIS-K suicide bomber had killed 13 US service members and dozens of Afghans at Abbey Gate, the key entry point to the airport.

With ongoing threats of another attack, the US strike cell believed it was tracking an ISIS-K member from a terrorist hideout as he made his way through the city over the course of eight hours.

In reality, the military was tracking Zamarai Ahmadi, an Afghan who worked for Nutrition and Education International, a nongovernmental organization focused on food security. Ahmadi had applied for a special immigrant visa and intended to bring his family to the United States.

Approximately three weeks after the strike, the military acknowledged it was a tragic mistake that had killed 10 innocent civilians. A subsequent Air Force review of the circumstances around the strike found "no violation of law, including the law of war."

No one has been held accountable for the mistake, even as Defense Secretary Lloyd Austin has promised an increased focus on holding the military to a higher standard on avoiding civilian casualties and harm.

Steven Kwon, the president of Nutrition and Education International, criticized the decision to not punish any US military personnel, saying, "When the Pentagon absolves itself of accountability, it sends a dangerous and misleading message that its actions were somehow justified, increasing security risks and making evacuation even more urgent."

In the longest of the three videos, the car is seen making its way along the streets of Kabul in grainy black and white footage. About five minutes into the 15-minute video, the car reaches its final destination and begins slowly reversing into a parking spot.

Seven minutes and seven seconds into the video, the words "LRD LASE DES" appear, indicating a laser designator has identified and ranged the target. At least two or three people are seen in the grainy video milling about the car. Thirty-three seconds later, the car vanishes beneath a bright fireball.

The drone video zooms out as the explosion recedes, with smoke pouring out of the destroyed car. The drone continues circling overhead as people move toward the scene of the explosion. Approximately three minutes later, the video switches from black and white to color, and crowds can be seen forming around the site of the explosion. People stand on rooftops overhead, trying to pour buckets of water on the remnants of the car to extinguish the flames.

"While the strike was intended for what was believed to be an imminent threat to our troops at Hamad Karzai International Airport, none of the family members killed are now believed to have been connected to ISIS-K or threats to our troops," said Capt. Bill Urban, spokesman for US Central Command, upon release of the videos. "We deeply regret the loss of life that resulted from this strike."

US Central Command, which oversees military operations in Afghanistan and the Middle East, released the videos in response to a Freedom of Information Act request from The New York Times, which first reported on them.

A second video, five minutes in length, shows the Corolla in color and higher quality in the minutes before and after the strike, though the car does disappear behind a building for part of the video. The video switches to black and white at approximately the halfway point as a white diamond marker appears above the car. The marker turns purple seconds before the missile hits the car and an explosion fills the screen. The video then reverts to color and, shortly thereafter, crowds begin forming at the scene. The video then pans away from the explosion.

A third video, also about five minutes long, shows a drone observing a number of locations in Kabul before it focuses on a parking lot with a number of parked white cars.