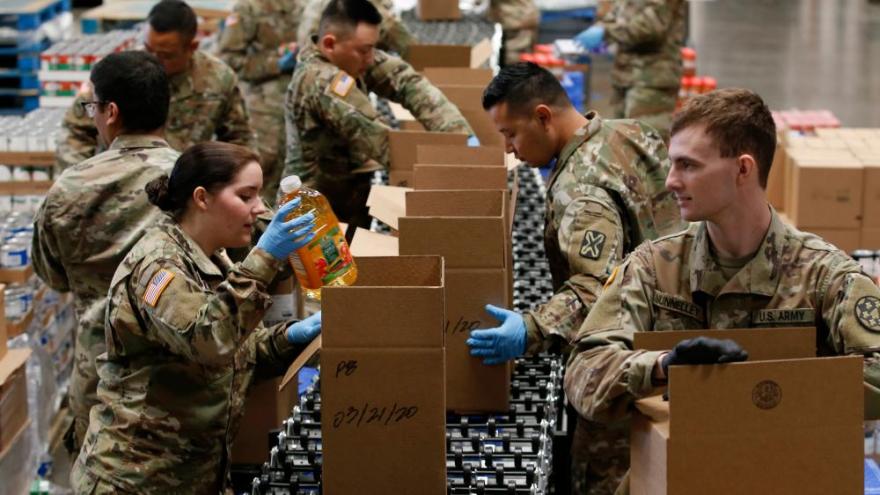 Members of 115th Regional Support Group of the California National Guard load boxes with food at the Sacramento Food Bank and Family Services.

(CNN) -- The US military is preparing to deploy additional forces to support the coronavirus response, including 15 Army task forces designed to support urban area hospitals dealing with the pandemic, a US defense official told CNN.

The Navy has placed two additional Navy Expeditionary Medical Treatment Facilities, one active duty and the other drawn from the reserves on "prepare to deploy orders." The Navy earlier sent two of these units to New Orleans and Dallas. They consist of about 450 personnel, including 150 doctors.

The Pentagon later confirmed the deployment of additional forces during a news conference on Friday.

The Navy and Air Force are also mobilizing volunteer reservists. The Army has similarly called up some 10,000 medical personnel on a voluntary basis in recent days.

The Army has also created 15 teams known as "Urban Area Medical Task Forces" from its reserves to help bolster the virus response. These teams will consist of 85 personnel each of which 20 will be doctors, a total of 1,275 personnel. The task forces are intended to work in arenas and convention centers that have been retrofitted into hospitals. The official said these forces should be mobilized by Tuesday.

Earlier on Friday, the Pentagon said that the military will convert three temporary medical facilities in New York, New Orleans and Dallas into ones capable of treating patients with the virus.

"At the request of (Federal Emergency Management Agency), the Department of Defense will expand its medical support to include COVID-19 positive patients at the Javits Federal Medical Station (FMS) in New York City, the Morial FMS in New Orleans, Louisiana, and the Kay Bailey Hutchinson FMS in Dallas, Texas," the Defense Department said in a statement.

Originally all three facilities were intended to treat non-coronavirus patients in order to free up capacity at civilian hospitals.

The Army Corps of Engineers also has more than 15,000 personnel working with contractors to set up temporary field hospitals and retrofit existing buildings such as convention centers and sports arenas into hospitals to add thousands of additional beds to treat both coronavirus and non-coronavirus patients in New York, Detroit, Chicago and elsewhere.

There is an acknowledgment within the Department of Defense that the situation in New York is deteriorating to the point where the US military has to draw more from its own medical capabilities, assuming risk at defense installations, in order to help combat the pandemic.

These additional forces will join the US military's 460 doctors, 1,117 nurses and other medical personnel already assisting civilian communities in their response to the coronavirus.

The US Navy has similarly deployed two hospital ships, the USNS Mercy and USNS Comfort, to Los Angeles and New York City respectively to reduce the strain on local hospitals by treating non-coronavirus patients.

So far the ships have treated fewer than 100 patients despite having a combined 2,000 bed capacity to treat non-coronavirus patients.

The Defense Department said Friday that it was streamlining the process in which patients are brought onto the ship to boost those numbers.

It's unclear how many additional field hospitals the Army could deploy if asked given these constraints on personnel and resources but the Secretary of the Army, Ryan McCarthy, told CNN Thursday that the service was actively looking at what more it could do.

The military has been hesitant to call up reservists to help with the response over concerns of them working as medical professionals in civilian hospitals.

The strain on the Army's medical personnel ranks led the service to ask retired soldiers to consider volunteering to aid the response. An Army spokesperson told CNN that some 9,000 retirees have expressed interest in returning to service.

"We still have capacity but we're definitely leaning into the resources we have," said Hoffman, the Pentagon spokesman.

In addition, the Pentagon is deploying a mortuary affairs unit to New York City to support the Office of the Chief Medical Examiner at the request of FEMA, a US defense official said Friday.

"Highly trained specialists will assist New York City with the solemn duty of properly handling human remains during this pandemic. Forty-two Soldiers from the 54th Quartermaster Company, from Fort Lee, Va., have deployed to Joint Base Maguire-Dix-Lakehurst, N.J. Federal and local laws regulate how these operations are conducted in the United States," the official said.

Esper made a similar pledge last month, with Hoffman saying Friday that all 5 million of that first set of N95 masks "have been delivered to the Department of Health and Human Services in support of state and locals."

"Close to 2 million have already been distributed and another 3 million are in distribution points in New York," he added.