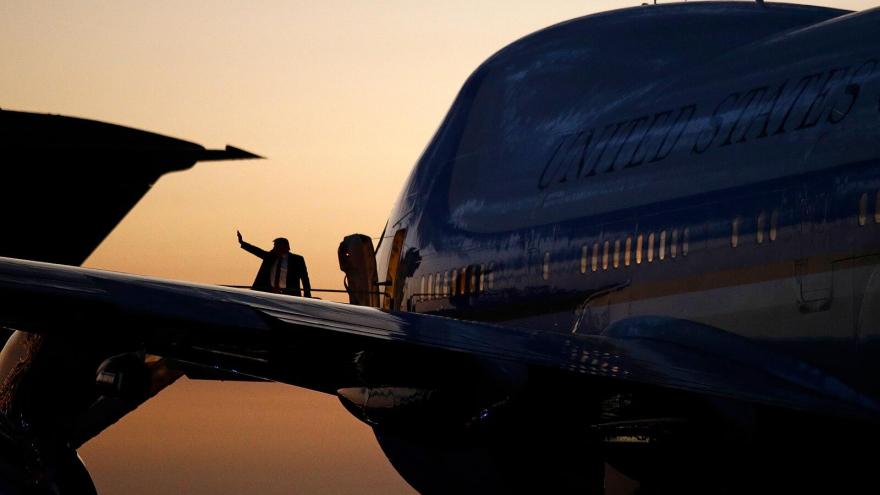 President Donald Trump waves as he boards Air Force One at Tampa International Airport in Tampa, Florida, on July 31, 2020.

(CNN) -- The Air Force's 89th Airlift Wing is reviewing a report after people traveling aboard Air Force One on Sunday saw an object that appeared to be a drone as the plane was landing at Joint Base Andrews outside Washington.

"We were making the approach, but not yet in the final landing run. I saw a thing with a kind of X shape and part of it was yellow. That's all I can say," a witness told CNN.

"This was a brief moment, obviously, but not flashing by," the witness said. "I had long enough to do a double take, then wonder if my eyes were playing tricks on me, and then decide that yes, this was definitely something in the air and only a short distance below and a bit off to the side of our plane."

If a drone were to have come close to Air Force One, that would be a major security breach. Drones are banned in the restricted national security airspace around Washington.

The 89th Airlift Wing said in a statement Monday that it is "aware of the report."

"The matter is under review. The 89th Airlift Wing's C-32A aircraft landed safely without incident," the statement said.

The witness said the person seated behind them also observed the object, and turned around to ask if they had also seen it.

"I've never seen anything as close to a plane as this, and since it was presumably quite small -- i.e., it definitely wasn't a plane - it can't have been that far to be visible at that speed," the witness said.

A US official who could not be identified due to the sensitivity of the issue told CNN there is a sensor system at Joint Base Andrews that would have, or should have, detected an unauthorized airborne object. They have gone back through the initial feeds and the computers don't show anything. They are continuing to investigate.

CNN reached out to the Federal Aviation Administration, which referred questions to Joint Base Andrews.

The 89th Airlift Wing, according to its website, "provides global Special Air Mission airlift, logistics, aerial port and communications for the president, vice president, cabinet members, combatant commanders and other senior military and elected leaders as tasked by the White House, Air Force chief of staff and AMC."