US military helicopters evacuated Americans from hotel near Kabul airport 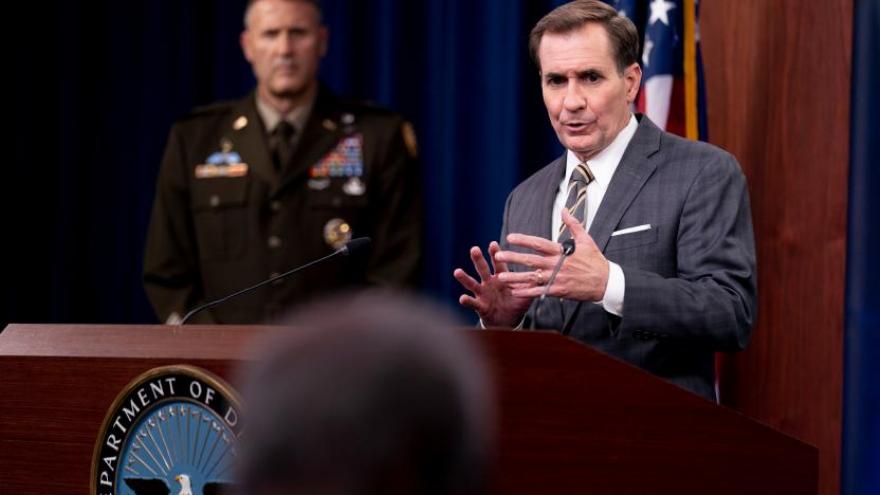 Pentagon press secretary John Kirby says, pictured here in Washington on August 20, 169 Americans were retrieved after another country informed US commanders that citizens had gathered at the Baron Hotel near the Kabul airport.

(CNN) -- The US military used helicopters to evacuate a group of Americans from a hotel near Kabul's airport, according to a Pentagon spokesman who provided new details about the mission that was first revealed by President Joe Biden in his speech on Friday.

The 169 Americans were retrieved after another country informed US commanders that citizens had gathered at the Baron Hotel near the airport, Pentagon press secretary John Kirby said Friday evening.

"It was a very quick, safely performed operation," Kirby said.

The original plan had been for the Americans to walk through the Abbey Gate, located approximately 200 meters from their hotel, Kirby said. But a large crowd had gathered at the gate, and some of the Americans felt unsafe trying to work their way through the crowd.

Kirby clarified his earlier remarks that this crowd had walked onto the field with the assistance of some US troops. He said there have been a few instances of Americans arriving at the airport and being escorted onto the field by US troops. But he said this is the only instance of which he is aware where US helicopters have left the field to collect American citizens.

The Associated Press was first to report on the mission.

The decision to launch the helicopters was made by the commander on the ground "on the spot."

"He executed a mission that he believed was in the best interest of helping these Americans, and he did," Kirby said. A third country, which Kirby would not identify, had established security at the hotel and informed the US that its citizens were there.

In his remarks Friday at the White House, Biden vowed, "Any American who wants to come home, we will get you home."

But while the US military has increased the pace of evacuations, reports indicate that the scene outside Kabul's Hamid Karzai International Airport is growing increasingly desperate.

Those who are able to reach the airport perimeter have reported waiting hours to enter and the US Embassy advised in a recent security alert that "due to large crowds and security concerns, gates may open or close without notice."

Biden laced his assurances Friday with a sober note of caution as reports continued to emerge of the Taliban beating and threatening people, including Americans, who are trying to make their way to the airport.

"Make no mistake, this evacuation mission is dangerous, involves risks to armed forces and has been conducted under difficult circumstances," he said.

"I cannot promise what the final outcome will be, or ... that it will be without risk of loss. But as commander in chief, I can assure you that I will mobilize every resource necessary."

This story has been updated with additional information Friday.