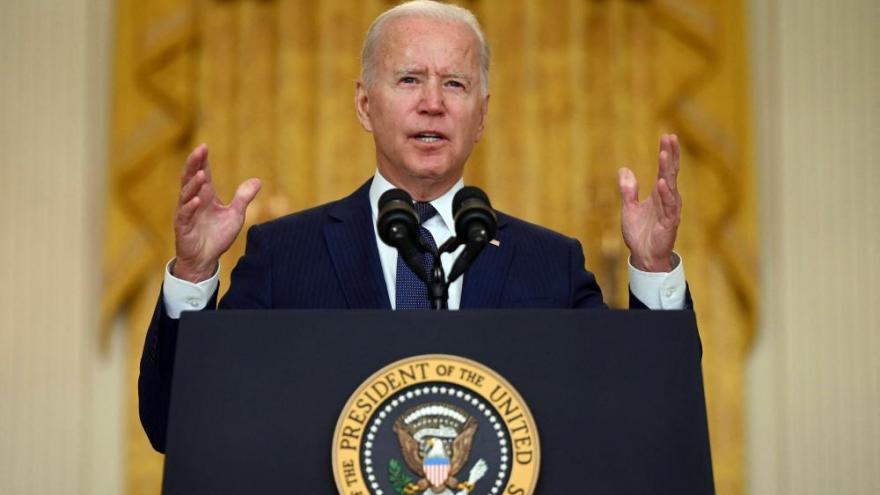 US President Joe Biden delivers remarks on the terror attack at Hamid Karzai International Airport, and the US service members and Afghan victims killed and wounded, in the East Room of the White House, Washington, DC on August 26. The US conducted an airstrike against an ISIS-K planner on August 27.

(CNN) -- The US has conducted an airstrike against an ISIS-K planner, US Central Command said in a statement Friday.

"Initial indications are that we killed the target. We know of no civilian casualties," Urban continued.

The announcement of the strike came a day after President Joe Biden vowed to retaliate for a terrorist attack that killed 13 US service members and at least 170 others outside Kabul's international airport even as he said the frantic mission to airlift Americans from Afghanistan would continue. Biden approved the strike on the ISIS-K planner, according to an official familiar with the matter.

ISIS in Khorasan, known as ISIS-K, has claimed that an ISIS militant carried out Thursday's suicide attack, but provided no evidence to support the claim. US officials have said the group was likely behind the bombing.

"We will respond with force and precision at our time, at the place we choose and the moment of our choosing," Biden said on Thursday. "Here's what you need to know: These ISIS terrorists will not win."

White House press secretary Jen Psaki said in a statement earlier Friday that Biden and Vice President Kamala Harris had been warned by their national security team that "another terror attack in Kabul is likely."

Biden and his team are now bracing for the possibility of another terrorist attack in the final days of the evacuation operation. "The threat is still out there," a senior White House official said. "It's still heightened."

The US Embassy in Kabul again on Friday advised US citizens at a number of gates at the airport to "leave immediately," citing security threats.

"Because of security threats at the Kabul airport, we continue to advise U.S. citizens to avoid traveling to the airport and to avoid airport gates," the alert said.

The US has evacuated and facilitated the evacuation of approximately 109,200 people since August 14, according to the White House.

About 4,200 people were evacuated from Kabul from 3 a.m. to 3 p.m. ET on Friday, according to the White House. The evacuations were carried out by 12 US military flights that carried approximately 2,100 evacuees and 29 coalition flights that also evacuated about 2,100 people.

Approximately 7,500 people had been evacuated from Kabul in the same 12-hour period the day before.

State Department spokesperson Ned Price said earlier Friday that "there are approximately 500 American citizens we are currently working with who want to leave and with whom we are communicating directly to facilitate their evacuations."

UPDATE: This story has been updated with US Central Command's corrected spelling of the Nangarhar Province.