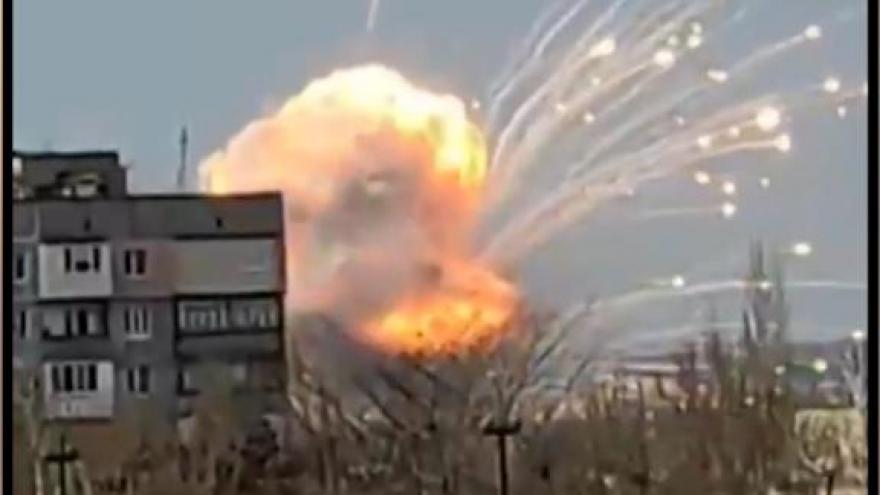 (CNN) -- Russia's invasion of its neighbor in Ukraine is the largest conventional military attack that's been seen since World War II, a senior US defense official said Thursday outlining US observations of the unfolding conflict.

"We haven't seen a conventional move like this, nation-state to nation-state, since World War II, certainly nothing on this size and scope and scale," the official told reporters Thursday. "And if it unfolds the way that hereto we have come to believe that it will, it has every potential to be very bloody, very costly and very impactful on European security writ large, perhaps for a long, long time to come."

The US had been issuing stark warnings for weeks that Russian President Vladimir Putin would launch an attack on Ukraine on a scale not seen in decades. The US and its European allies are set to unveil sanctions on Russia Thursday in response to Moscow's aggression, though US President Joe Biden has made clear US troops deploying to NATO counties in eastern Europe will not be drawn into the conflict in Ukraine, which is not a member of NATO.

There were 75 fixed-wing heavy and medium bombers that were also part of the initial attack, the official said, and Russia began "some ground incursions" into Ukraine from Belarus, which borders Ukraine to the north. Russian troops had been stationed in Belarus for what Moscow claimed were military exercises.

So far, the Russian military has targeted military and air defense targets in Ukraine, including barracks, ammunition warehouses and nearly 10 airfields, the official said.

The US plans to continue its recent pattern of selectively revealing Putin's plans as they learn them, officials said Thursday, even though it's now clear the strategy could not prevent an invasion of Ukraine.

Officials say they expect to continue using the tactic of releasing intelligence, not necessarily to deter Putin -- which hasn't proved successful -- but to counter Russian claims about events on the ground. That could include rebutting Russian claims about atrocities or seeking to expose some of Putin's plans ahead of time.

Six F-35s will arrive in Estonia, Lithuania and Romania, two to each country, according to the official. A group of attack helicopters "are on their way," the official said, while noting there's been "some weather issues" to get them to their locations. "We still expect those Apaches to get on site later today," the official said.

On Tuesday, Biden announced more US military assets would be deployed to NATO allies in Eastern Europe.

Biden and US officials have said repeatedly that US troops are not going into Ukraine, but they are being deployed to reinforce NATO's eastern flank.

"US troops remain outside of Ukraine," the official added..