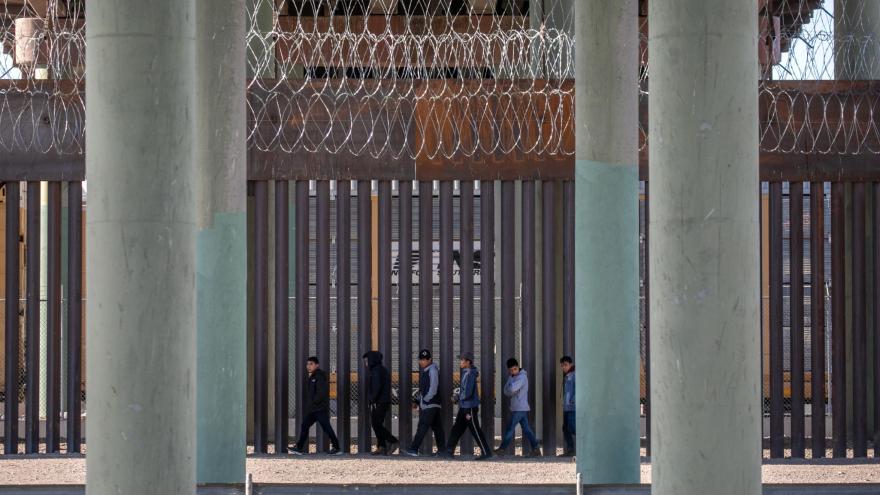 (CNN) -- US border authorities in June arrested or turned away the highest monthly number of migrants at the US-Mexico border in at least a decade, according to a Department of Homeland Security official familiar with the figures and to previously published data.

They encountered around 188,800 migrants in June, up from 180,034 in May, enough to bring the fiscal year total so far to more than 1 million Customs and Border Protection encounters. That's more than in recent years, including 2019, which was labeled a "humanitarian catastrophe" as the number of families and unaccompanied children arriving at the border spiked.

Last year, fewer migrants entered the US as the coronavirus pandemic took hold across the globe and shutdowns were imposed.

The number of migrants intercepted at the US-Mexico border has been on the upswing since May 2020, when around 23,000 people were encountered by Customs and Border Protection. This June was the highest monthly number since President Joe Biden took office.

The monthly data is used as a measure of illegal migration to the US. However, in March 2020 the US implemented a public health measure that allowed for the rapid expulsion of migrants at the border, impacting the number of repeat crossings. The Biden administration has kept the Trump-era health order, known as "Title 42," in place amid ongoing litigation and a torrent of criticism from immigration advocates and some lawmakers.

In June, 34% of the encounters were of migrants who'd had at least one previous encounter in the last year.

Weeks after Biden took office, the number of unaccompanied minors arriving at the US-Mexico border began to jump, overwhelming the federal government's resources and resulting in a scramble to find enough shelter space to accommodate them.

In the months that followed, the administration was able to decrease the time children were spending in jail-like Border Patrol facilities, which had reached 133 hours in March -- well over the 72-hour legal limit.

At the end of June, the average time in Customs and Border Protection custody was down to 28 hours, according to the DHS source familiar.

CNN reported at the end of June that more than 1 million migrants had been arrested since last October after illegally crossing the US-Mexico border, according to two DHS officials, surpassing the 2019 border crisis tally with three months left in the fiscal year.

In March, Homeland Security Secretary Alejandro Mayorkas estimated that the US was "on pace to encounter more individuals on the southwest border than we have in the last 20 years."

The border agency does not comment on data until it is publicly released, which is usually around the first week of the month.