US medical mask maker blasts government for failing to prepare for pandemic: 'I've been ignored for so long' 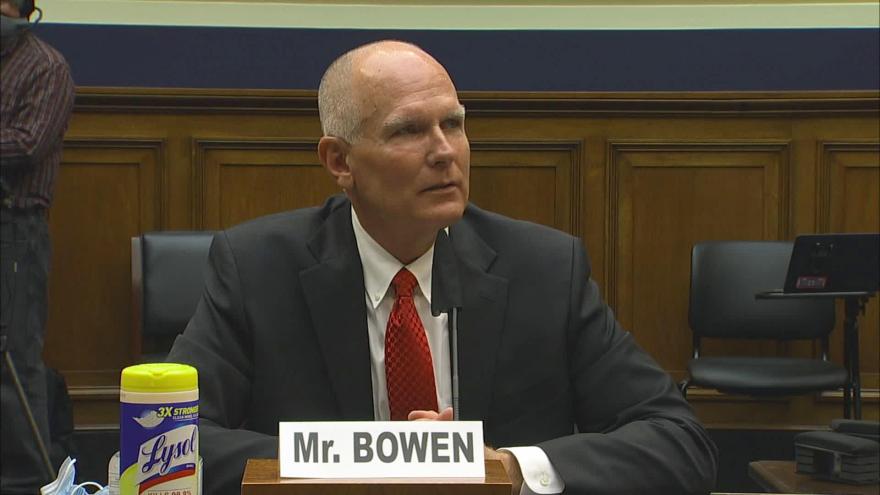 An executive for a US mask producer bemoaned, in heated and emotional testimony to Congress, how his warnings of insufficient domestic medical mask production had been ignored by the federal government for years until the coronavirus pandemic.

(CNN) -- An executive for a US mask producer bemoaned, in heated and emotional testimony Thursday to Congress, how his warnings of insufficient domestic medical mask production had been ignored by the federal government for years until the coronavirus pandemic.

Speaking before the House Energy and Commerce Committee, Mike Bowen, the vice president of the Texas-based medical supply company Prestige Ameritech, said the US dependence on foreign masks has been a national security issue for years.

Bowen described conversations over the past 13 years in which he had offered manufacturing deals to the Centers for Disease Control and Prevention that included "mak(ing) sure that the Department of Defense and the Veterans Administration always has masks," adding that "I couldn't get anybody interested in it."

"Forgive me for being angry; I'm angry because I've done this for so, so long," Bowen said, appearing to fight back tears. "And I've been ignored for so long. And I apologize."

"Well, Mr. Bowen, I don't think you need to apologize," said Rep. Anna Eshoo, a California Democrat who's the chairwoman of the committee, who called his testimony "some of the most important testimony that Congress could be hearing."

Bowen joins others -- including the hearing's other witness, Rick Bright, the ousted director of the office involved in developing a coronavirus vaccine -- who have alleged that relevant experience and expertise in health care and supply chains were not prioritized in the federal coronavirus response.

Bright earlier on Thursday recounted a previous warning from Bowen on the country's readiness for the pandemic.

Bright said he would "never forget" an email from Bowen indicating that the US supply of N95 respirator masks, which are used by health care professionals, was at a perilously low level.

Bright said he had "pushed" that warning "to the highest levels" he could at the federal Department of Health and Human Services but received "no response."

"From that moment, I knew that we were going to have a crisis for health care workers because we were not taking action," said Bright. "We were already behind the ball."

Bowen also referenced the email during his own testimony. He told lawmakers he had offered increased capacity to make masks, and noted that if his lines were activated "we could be making about 7 million N95 respirators a month."

"So my email to Rick Bright, in that email, I said, 'I think we're in trouble. We have these machines, it would be expensive and hard to get them going. But if we're going, if this is going to be bad, that could happen.' So that was my offer."

Eshoo then asked Bowen if the reason the offer wasn't accepted was to save money.

"It's -- I call it chasing pennies to China," Bowen said.

"And look what it has cost us," Eshoo said.

"It's cost us lives," Bowen replied.

HHS referenced Bowen in its pushback against the two witnesses testifying Thursday, dismissing the claim that "despite Rick Bright's efforts, HHS failed to act after Mike Bowen, from the mask manufacturer Prestige Ameritech, sounded the alarm about mask shortages."

The Biomedical Advanced Research and Development Authority, which Bright had led, "is not responsible for purchases of masks or other personal protective equipment," HHS wrote in a news release Thursday, noting that "Prestige Ameritech nonetheless contacted Rick Bright directly and sought government support to expand its manufacturing capacity as well as expedited regulatory clearance."

A doctor from the Strategic National Stockpile "responded to Mr. Bowen in January 2020, considered the information that he provided, and informed him that the SNS would be obtaining masks through the procurement process, which included requests for information directed to potential suppliers," HHS added.

Bowen also said during his testimony Thursday that he learned a business lesson from the H1N1 pandemic that hit the world in the late 2000s.

"I'm not going on a suicide mission," he said, telling lawmakers on Thursday that he would not hire more workers to run more machines unless he enters into a long-term contract, to ensure that he doesn't have to fire those employees later on.

"Listen, we've gone from one shift to three, 80 people to 200" since the coronavirus pandemic hit, Bowen told Rep. Buddy Carter during a fiery exchange with the Georgia Republican. "We're making four times the products we made. We're making over a million masks a day -- don't you look at me and act like I'm sitting on my ass."

During the H1N1 pandemic, Bowen said, his company hired more employees to ramp up production only to have to let them go after the pandemic was over.

"The government sits around, doesn't buy American-made products, comes to me in a pandemic, buys millions of masks in 2010, and you know what they did with those masks?" Bowen said. "They stored them for 10 years, then they auctioned them to some knucklehead who put them on eBay and sold them for 10 times what they were worth."

"So not only have I not seen the government in 10 years, I got to compete with my own masks," he continued, adding that "I've been hit from every side on this thing. We have bled for this country."