US life expectancy fell by more than a year during coronavirus pandemic, research suggests 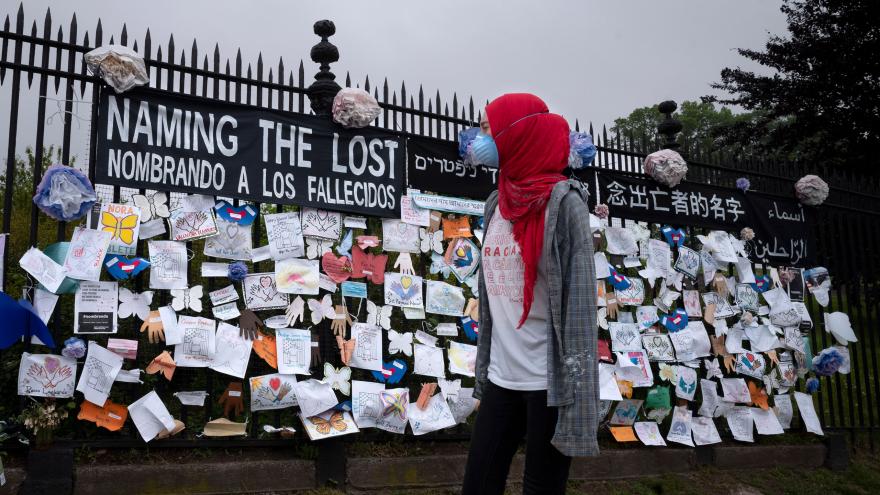 (CNN) -- Two new studies reveal just how much of a toll the coronavirus pandemic has taken on life expectancy in the United States, which lags behind other high-income nations.

In 2020, Covid-19 deaths were associated with a reduced US life expectancy by more than one year, according to research published Thursday in the journal JAMA Network Open. The researchers said the reduction in life expectancy is three times as large for Latino people and twice as large for Black people as it is for White people.

Covid-19 reduced overall 2020 life expectancy from 78.74 years to 77.43 years -- a reduction of 1.31 years, according to estimates from Theresa Andrasfay of the University of Southern California Leonard Davis School of Gerontology, and Noreen Goldman, a professor of demography at Princeton University.

"The change in life expectancy among the Black population was smaller than projected but remained much larger than that for the White population," the researchers write in their study. "The differences are likely partly due to the changing geography of the outbreak: since our October projections, Midwestern and Mountain states with large White populations experienced surges in COVID-19 cases and deaths."

"This unprecedented change likely stems from social and economic inequities that are associated with both higher exposure to infection and higher fatality among those infected," the researchers wrote.

The researchers used data from the US Centers for Disease Control and Prevention, US Census Bureau and US Vital Statistics System to inform the new estimates. Their calculations include 380,868 coronavirus deaths in 2020.

"A limitation of this study is that these life expectancy reductions are almost certainly underestimated because they exclude misclassified COVID-19 deaths and mortality from causes resulting indirectly from COVID-19," the researchers noted.

They added that their findings suggest the virus is associated with continued decline in life expectancy in 2021.

"COVID-19 deaths through early April 2021 already indicate an almost 0.6-year reduction in overall 2021 US life expectancy with continued disproportionate changes for the Black and Latino populations," the researchers wrote.

A separate study, published Wednesday in the medical journal The BMJ, suggests that the pandemic took a much greater toll on the US than other high-income nations.

US life expectancy falls more than other high-income nations

Between 2018 and 2020, life expectancy in the United States dropped significantly more than average in other high-income nations, according to The BMJ study.

This life expectancy gap had been growing over time; there was less than a two-year difference between the US and peer countries in 2010, but the gap ballooned to about 4.7 years in 2020 after the US experienced a particularly high mortality rate.

The effects of the coronavirus pandemic on life expectancy include deaths directly attributed to Covid-19, as well as pandemic-related disruptions, including reduced access to health care, economic pressures and mental health crises, according to the authors of the study.

"The conditions that produced a US health disadvantage before the arrival of Covid-19 are still in place, but the predominant cause for this large decline was the Covid-19 pandemic," the researchers wrote, citing policy choices and mishandling of the pandemic, as well as "deeply rooted factors that have put the country at a health disadvantage for decades."

Data for 2019 was excluded, as it was not available for all countries analyzed, and 2020 life expectancy data was modeled using official life tables.

"Although life expectancy is expected to recover in time to levels before the pandemic, past pandemics have shown that survivors can be left with lifelong consequences, depending on their age and other socioeconomic circumstances," the researchers noted.

"The pandemic will have short and long term effects on the social determinants of health, changing living conditions in many communities, and altering life course trajectories across age groups. Fully understanding the health consequences of these changes poses a daunting but important challenge for future research."

Peer countries were chosen from a set of high-income democracies with adequate data for analysis. The study involves data from the Human Mortality Database, as well as the National Center for Health Statistics and the US Census Bureau.

"The mortality outcomes examined in this study, in the research literature, and in the daily news represent only part of the burden of covid-19; for every death, a larger number of infected individuals experience acute illness, and many face long term health and life complications," the researchers wrote. "Whether some of these long term complications will affect how quickly life expectancy in the US will rebound in the coming years is unclear."