US issues sanctions, warns businesses of risks in China and Hong Kong as Beijing promises to 'respond strongly' 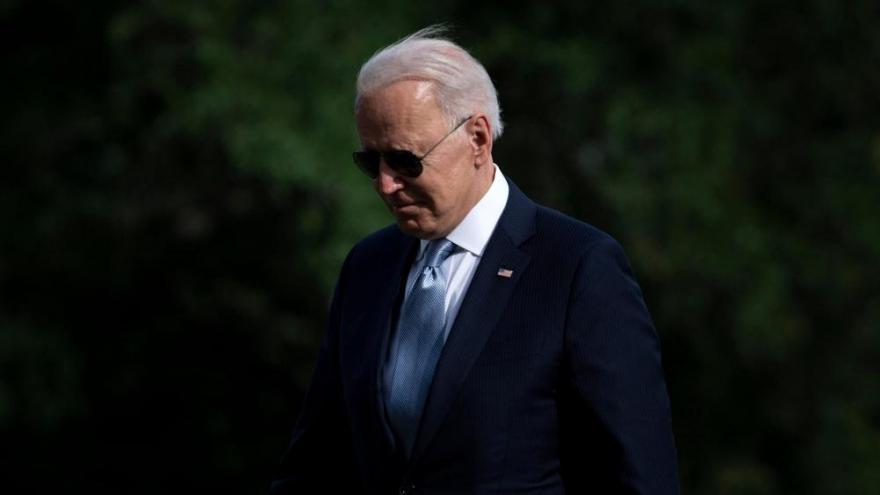 US President Joe Biden walks from Marine One on the South Lawn of the White House July 13, 2021, in Washington, DC. The Biden administration sanctioned seven Chinese officials July 16 amid continued crackdowns in Hong Kong by the Chinese government.

It also warned US businesses in an advisory issued Friday of the "growing risks" posed by the governments in Beijing and Hong Kong.

The release of the advisory and sanctions are likely to further inflame tensions between Washington and Beijing. A Chinese spokesman, asked about the pending measures earlier Friday, blasted US "interference" and said China would "respond strongly."

"Beijing has chipped away at Hong Kong's reputation of accountable, transparent governance and respect for individual freedoms, and has broken its promise to leave Hong Kong's high degree of autonomy unchanged for 50 years," Blinken said.

The administration sanctioned Chen Dong, Yang Jianping, Qiu Hong, Lu Xinning, Tan Tieniu, He Jing, and Yin Zonghua, who Blinken said were "Deputy Directors of the Liaison Office of the Central People's Government of the Hong Kong Special Administrative Region (LOCPG)." The top US diplomat described the office as China's "main platform for projecting its influence in Hong Kong and has repeatedly undermined the high degree of autonomy promised for Hong Kong in the Sino-British Joint declaration."

The business advisory, issued by the Departments of State, Treasury, Commerce and Homeland Security, noted that, "businesses, individuals, and other persons, including academic institutions, research service providers, and investors ... that operate in Hong Kong, or have exposure to sanctioned individuals or entities, should be aware of changes to Hong Kong's laws and regulations."

The nine-page advisory noted that measures like China's national security law "could adversely affect businesses and individuals operating in Hong Kong," and outlined four key areas of risk: "data privacy risks; risks regarding transparency and access to critical business information; and risks for businesses with exposure to sanctioned Hong Kong or PRC entities or individuals."

President Joe Biden, asked about the advisory on Thursday, told reporters, "The situation in Hong Kong is deteriorating, and the Chinese government is not keeping the commitment it made, how to deal with Hong Kong. And so, it is more of an advisory as to what may happen in Hong Kong. It's as simple as that and as complicated as that."

In a statement, Hong Kong's government called the latest US sanctions "totally ridiculous and unfounded fear-mongering."

Chinese Foreign Ministry Spokesperson Zhao Lijian, speaking before the US actions were formally announced, hit back at US "interference," saying, "Hong Kong is part of China and its affairs are purely China's internal affairs."

"No country has the right to make wanton criticism and meddle in them," Lijian said at the foreign ministry's daily briefing. "The Chinese government is firmly determined to oppose US interference in Hong Kong affairs, safeguard national sovereignty, security and development interests, and implement One Country, Two Systems."

"The US should adhere to international law and basic norms governing international relations, stop meddling in Hong Kong affairs in any form and stop interfering in China's domestic affairs. China will respond strongly to possible US measures," he said.

This story has been updated with a statement from Hong Kong's government.