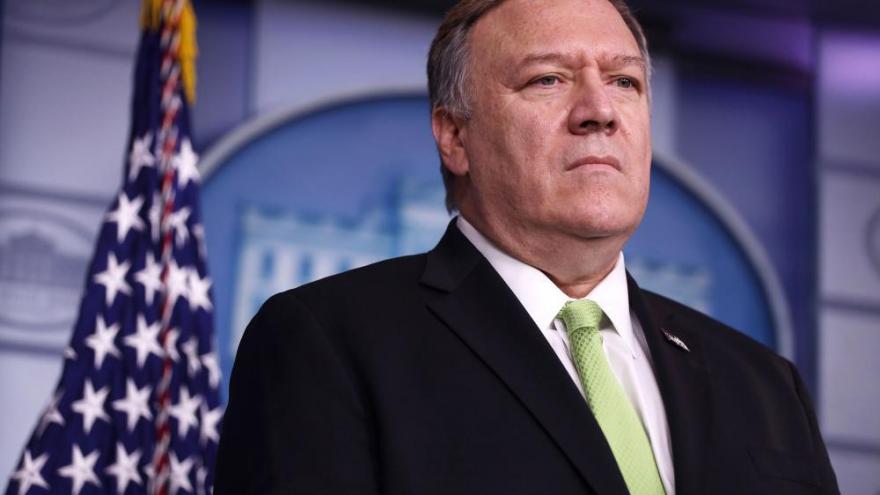 (CNN) -- The Trump administration was left isolated on the world stage as foreign allies and competitors alike rejected its demand to restore UN sanctions on Iran Thursday.

Despite President Donald Trump's decision to pull the US out of the Iran nuclear deal in 2018, Secretary of State Mike Pompeo said Thursday that the US has "every capacity" under United Nations Security Council Resolution 2231, which enshrined the international agreement, to trigger so-called snapback sanctions, because the US was initially a party to the deal.

"We have every capacity under 2231 to do this," Pompeo said, speaking Thursday to reporters during his visit to the United Nations, where he formally notified the UN that the Trump administration was initiating the process to reinstate all UN sanctions that had been imposed on Tehran before the nuclear agreement.

The top US diplomat pointed to Iranian violations of the 2015 nuclear deal, formally known as the Joint Comprehensive Plan of Action, as justification for the unilateral US move. "It's written, it's plain, it's very straightforward," he said.

'Side with the ayatollahs'

Other countries that remain party to the deal -- China, Russia, France, the United Kingdom and Germany -- disagreed with Pompeo's legal rationale for the move, as many believe the full return of UN sanctions would kill the 2015 agreement.

France, Germany and the UK, known as "the E3," noted that "the US ceased to be a participant to the JCPOA following their withdrawal from the deal on May 8, 2018," in a joint statement on Thursday. "We cannot therefore support this action which is incompatible with our current efforts to support the JCPOA."

Speaking to reporters later, Pompeo said that they "chose to side with the ayatollahs."

When Trump pulled the US out of the international agreement, he called it "the worst deal ever negotiated." The agreement offered Iran relief from a broad array of sanctions in exchange for a freeze on aspects of its nuclear program. Countries remaining in the deal argued it was the only way to maintain dialogue with Iran and keep tabs on the development of their nuclear arsenal.

Russia and China were also critical of the US on Thursday.

"The US demand has no legal ground and common sense. It is nothing but a political show staged by the United States," said a spokesman for China's mission to the UN. "It receives no support of the Security Council members and no acknowledgment of the international community."

Security Council diplomats told CNN that Russia had requested a meeting Friday to discuss the US decision to trigger a snapback of sanctions on Iran. But Russia withdrew that request, with Russia's deputy UN ambassador saying in two tweets that the United States had objected to having a meeting. The ambassador said it was "unbecoming behavior" for the US.

Usually a request for a Security Council meeting is accepted, but under new rules during the pandemic, the decision to hold a virtual meeting must be accepted by consensus.

The State Department created a brief detailing their legal rationale for triggering sanctions to share with UNSC diplomats.

The brief argues that in the text of the JCPOA, the term participants is "fixed in content and fixed over time, and provides the States identified in that term's definition, including the United States," the brief says.

Using this rationale, the brief argues that because the US was an original signatory to the deal, it remains a "participant," even though the Trump administration has left the pact, and can therefore compel the return of these crippling sanctions.

Despite a wide range of criticism, Pompeo said the US is "confident" that a resolution to trigger these snapback sanctions will proceed, but he did not detail any assurances he received during his conversations with officials at the UN.

The next moves are uncertain and will be largely left to UN Secretary-General Antonio Guterres, who met with Pompeo on Thursday afternoon.

The US pushed to reimpose the snapback sanctions related to the Iran nuclear deal after suffering an embarrassing loss last Friday in the Security Council trying to extend a conventional arms embargo on Tehran that expires in October.

This story has been updated with Russia withdrawing its request for a Security Council meeting.