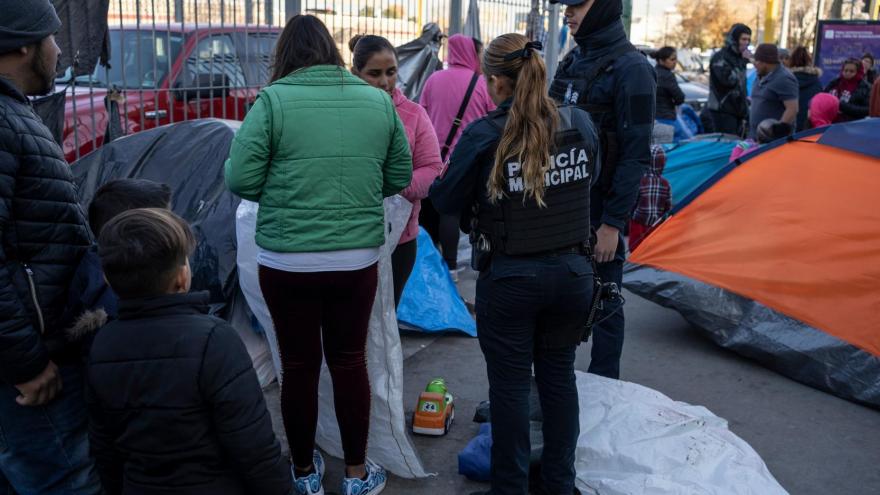 The administration is pushing to use the coronavirus pandemic to accomplish some of the tough immigration restrictions that hardliners have struggled to put into practice since President Donald Trump took office, including blocking entry to asylum seekers, according to US officials briefed on the plans.

(CNN) -- The administration is pushing to use the coronavirus pandemic to accomplish some of the tough immigration restrictions that hardliners have struggled to put into practice since President Donald Trump took office, including blocking entry to asylum seekers, according to US officials briefed on the plans.

A plan to turn back all migrants seeking asylum would have its most immediate effect on the US-Mexico border. It has run into opposition from several government agencies, in part because of concerns that it would violate US and international law, including treaties on how to deal with refugees and victims of torture.

Officials are working on a plan to deny entry to all asylum seekers, according to multiple sources. That may include a plan to return all illegal border crossers without due process.

"It's an unprecedented closure of the Southwest border," said a senior Department of Homeland Security official. "Shutting off any due process for the time being and turning people around."

US citizens and legal permanent residents will continue to be allowed to enter the US, the official said, adding that the ban won't apply to cargo shipments. However, it is unclear whether others will be allowed to continue to cross legally.

Asked for comment, DHS spokeswoman Heather Swift said in a statement, "President Trump is one hundred percent focused on protecting the American people," adding that "all options are on the table."

Trump has previously floated closing the southern border and tried to bar migrants who illegally crossed the border from seeking asylum. Legal challenges have blocked the administration from moving forward with some of its more restrictive policies, though others remain intact, including its controversial asylum policy of requiring migrants to wait in Mexico until their immigration court dates in the US.

In recent weeks, Homeland Security officials have pushed to seal off the border from what they argued was a national security threat posed by refugees and illegal immigrants who may have the virus and spread it to border agents who would then have to be quarantined, the officials said.

One official said immigration hardliners have long looked for ways to try to stop asylum seekers from even having their claims heard by immigration officers, and that the coronavirus threat was being used as an excuse to accomplish what they had so far been unable to.

The plan, which has been in the works for weeks and discussed among lawyers for multiple government agencies, had run into opposition from some officials, in part because they didn't think the virus outbreak met the criteria to bypass US and international law, according to the officials.

Earlier this month, acting Deputy Homeland Security Secretary Ken Cuccinelli told reporters that the administration had not identified coronavirus in the migration flow, a reference to migrants arriving at the US-Mexico border.

"When do those start finding their way into the immigration flow?" he said. "When we observe that happening -- and we have not observed that happening -- that will begin to affect our calculus on the southern border and having to be more aggressive, potentially using some legal authorities that we're not engaging right now."

DHS has not said whether that has since changed.

The Justice Department's Office of Legal Counsel was asked to review and determine whether the pandemic met the criteria for national security exemptions. A Justice spokesman referred a request for comment to the White House.

In February, Border Patrol arrested 30,068 migrants illegally crossing the southern border, according to the latest available data from Customs and Border Protection.