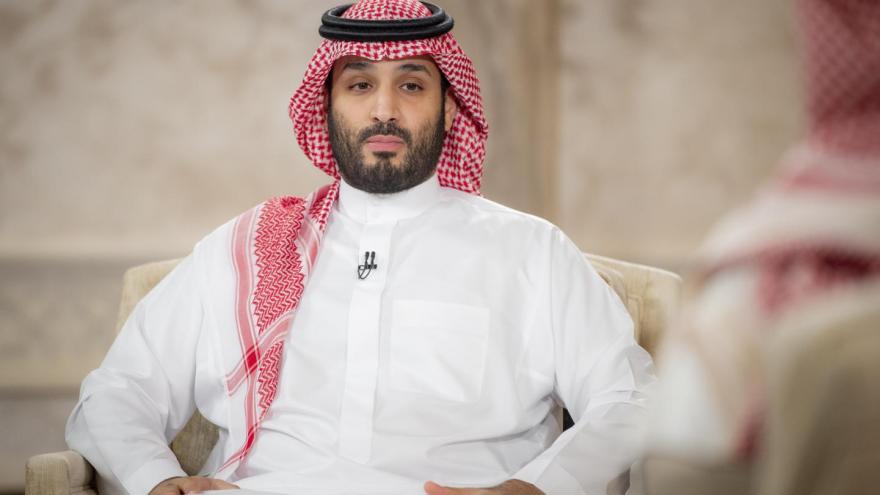 The Justice Department has made the extremely rare move of intervening in a court case against a former top Saudi intelligence official who has been targeted by Saudi Arabia’s powerful Crown Prince, Mohammed bin Salman, pictured here on April 28, in order to protect classified intelligence secrets.

(CNN) -- The Justice Department has made the extremely rare move of intervening in a court case against a former top Saudi intelligence official who has been targeted by Saudi Arabia's powerful Crown Prince, in order to protect classified intelligence secrets.

If the court case is allowed to proceed, the Justice Department said in a motion filed Tuesday, it could lead to "the disclosure of information that could reasonably be expected to damage the national security of the United States."

Aljabri -- who fled to Canada in 2017 -- became a nemesis of the Crown Prince, Mohammed bin Salman, after working for years alongside the country's head of counterterrorism, Prince Mohammed bin Nayef, who was a rival of Salman's for the throne.

A group of Saudi companies owned by the Kingdom's sovereign wealth fund, which the prince controls, then brought embezzlement cases against Aljabri, first in Canada and now the United States. Aljabri denies the accusations and accuses the prince, known as MBS, of sending an assassination squad to Canada to try to kill him and of holding two of his children hostage in Saudi Arabia.

Aljabri has alleged that MBS made multiple attempts to lure him back to Saudi Arabia and said that the hit team sent to Canada was part of the same team that had killed journalist Jamal Khashoggi just days earlier.

The group of Saudi companies that has brought the cases against Aljabri was, according to the Justice Department's own filing, established "for the purpose of performing anti-terrorism activities."

The holding company, called Sakab, accuses Aljabri of defrauding them. In order to defend himself against the charges, the Justice Department says Aljabri intends "to describe and present evidence regarding alleged sensitive national security information."

"It's definitely rare for such [Justice Department] filings to occur," said Marc Raimondi, who recently left the Justice Department where he served as a spokesman for the National Security Division.

According to a source who used to serve in government and is familiar with the case and intelligence, the classified information that could come to light includes intelligence relationships, operations, classified sources and methods. The revelations could also be embarrassing, particularly to Obama-era officials, given the often "unseemly" nature of the intelligence world, the source added.

'The right thing to do'

"It's the right thing to do. You don't want to disclose these things," the source said.

By bringing the case against Aljabri in the United States, Saudi Arabia and its defacto ruler have put not only the US in a difficult position but prioritized the feud with Aljabri over the two countries' relationship, the former government source said. The source added: "It appears to me a very personal vendetta that doesn't have long term interests both for the kingdom and for the US and for intelligence cooperation in the future."

The Saudi embassy in Washington did not immediately respond to CNN's request for comment.

Last week, a bipartisan group of senators wrote to President Joe Biden praising Aljabri's two decades of partnership with the US and calling on Biden to help with Aljabri's imprisoned children, Omar and Sarah, 22 and 21, respectively. They also highlighted the danger MBS's campaign against Aljabri presents to US national security and directly reference the possibility that classified information could be exposed.

'Using the children as leverage'

"The Saudi government is believed to be using the children as leverage to blackmail their father and force his return to the kingdom from Canada, where he currently resides in fear of possible retribution for his previous support for a rival of Saudi Crown Prince, Mohammad Bin Salmon [sic]," the letter reads, which was signed by Sens. Marco Rubio, Tim Kaine, Patrick Leahy and Ben Cardin.

"The prolonged persecution of Dr. Aljabri and his family members has now evolved to risk the exposure of classified U.S. counter-terrorism projects," the letter concludes. "In light of these recent developments, we urge you and your administration to pursue an amicable resolution that secures the immediate release of Omar and Sarah and protects U.S. national security interests."

"For four years now, Dr. Saad has upheld the oath he's taken to protect state secrets despite the ruthless campaign against him, his children and family by MBS," an advisor to Aljabri said in a statement. "The US government becoming party to this case to protect its interests is a welcomed step but it's high time for a facilitation of a full and amicable resolution that frees his children and protects him from further persecution."

The Justice Department's motion Tuesday says that on top of its "weighty interest in intervening," it is considering asserting state secrets privilege, which would allow the US government to block information that is harmful to national security. A final decision will be made by the end of the month.