US intercepts Russian bombers, fighter jets off the coast of Alaska 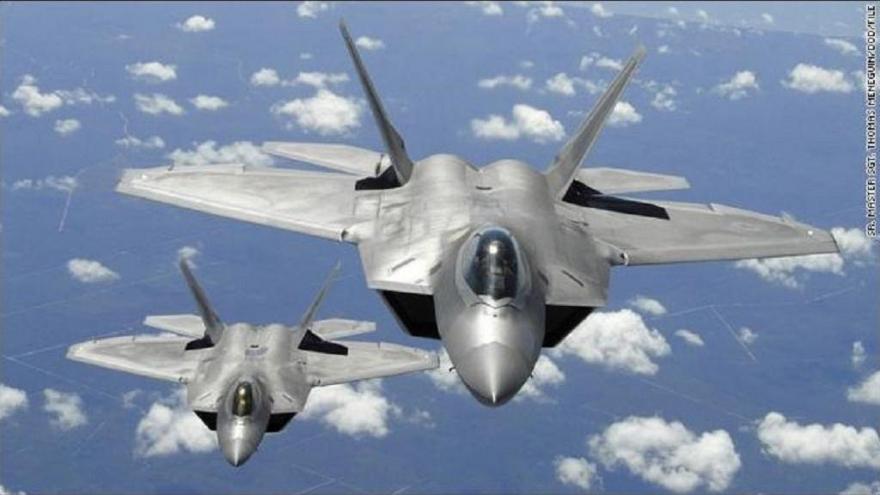 US F-22 stealth jets intercepted four Russian bombers and two Russian Su-35 fighter jets off the coast of Alaska, according to a statement from North American Aerospace Defense Command.

(CNN) -- US F-22 stealth jets intercepted four Russian bombers and two Russian Su-35 fighter jets off the coast of Alaska on Monday, according to a statement from North American Aerospace Defense Command.

The Russian bomber flights are seen by US military officials as part of Moscow's effort to train its military for a potential crisis while simultaneously sending a message of strength to adversaries.

This latest intercept comes amid tensions with Russia on a wide range of geopolitical issues and a week after Secretary of State Mike Pompeo met Russian Vladimir Putin in the resort town of Sochi where he warned Russia about interfering in US elections, taking a tougher public line than President Donald Trump on the issue.

"Two of the Russian bombers were intercepted by two F-22s, and a second group of bombers with Su-35 fighters was intercepted later by two additional F-22s, while the E-3 provided overall surveillance," NORAD said, adding that "the Russian bombers and fighters remained in international airspace and at no time did the aircraft enter United States or Canadian sovereign airspace."
READ: Pompeo claims Russia stopped Maduro leaving Venezuela for Cuba

The Russian Ministry of Defense confirmed the incident in a tweet Tuesday, saying the Tu-95 bombers "made scheduled sorties over the neutral waters of the Chukotka, Bering and Okhotsk seas, as well as along the western coast of Alaska and the northern coast of the Aleutian Islands."

"At certain stages of the route, Russian aircraft were escorted by #F22 fighter jets of the #USAF. The total flight time exceeded 12 hours," the ministry added.

US officials say Russian bombers and jets have flown in the area several times a year for the last few years and have similarly been intercepted by US or Canadian jets operating as part of NORAD.

"NORAD's top priority is defending Canada and the United States. Our ability to deter and defeat threats to our citizens, vital infrastructure, and national institutions starts with successfully detecting, tracking, and positively identifying aircraft of interest approaching U.S. and Canadian airspace," Gen. Terrence J. O'Shaughnessy, the commander of NORAD, said in a statement.

"Patrols by Russian military aircraft off the coasts of the United States and Canada have grown increasingly complex in recent years," O'Shaughnessy said in written testimony submitted to Congress earlier this month.

He wrote that the bomber patrols were a "highly visible" message intended "to underscore Russia's capabilities" and develop "a new generation of air crews," adding that "NORAD fighter aircraft routinely intercept Russian military aviation missions inside the US and Canadian Air Defense Identification Zones, and there is no indication that Russian leadership intends to reduce the number of these missions in the near future."

NORAD is tasked with patrolling US and Canadian airspace and air defense identification zones.