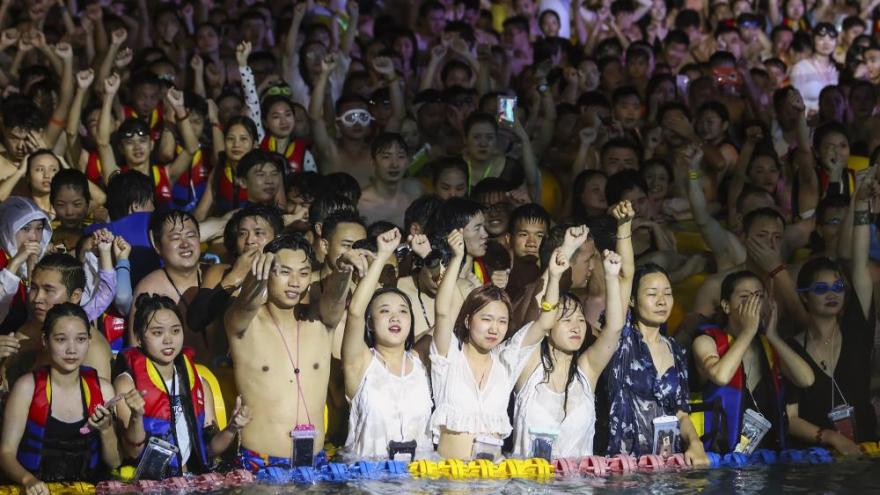 This photo taken on August 15, 2020 shows people watching a performance as they cool off in a swimming pool in Wuhan in China's central Hubei province.

(CNN) -- US intelligence has gathered information showing that officials in Wuhan, China, kept senior officials in Beijing in the dark for weeks about the virus that resulted in the Covid-19 pandemic, according to US officials familiar with the intelligence.

The reports also say that when the Chinese Communist Party learned about the virus, it sought to obscure the full extent of that knowledge from the rest of the world -- painting an overall picture of a dangerously secretive political system, the US officials said. The Trump administration has repeatedly made that accusation and US officials say the Chinese conduct fits a pattern that was also seen during the outbreak of SARS, or severe acute respiratory syndrome, in 2003.

While the US continues to collect information about the novel coronavirus outbreak in China, the intelligence contains indisputable evidence of the local cover-up attempt, the officials say.

The New York Times was first to reveal that US intelligence had reported on efforts to coverup information about the virus at the local level in Wuhan.

President Donald Trump and his senior officials have aggressively attacked China for the pandemic, with Trump at one point suggesting Beijing intentionally allowed the virus to spread beyond its borders to harm other nations' economies. The criticism marked a sharp about-face after Trump's initial praise for President Xi Jinping's handling of the virus -- part of an election campaign strategy to deflect blame for a pandemic that has killed 175,000 Americans and now infects more than 5.5 million in the US.

Local governance in Wuhan includes both state officials and Chinese Communist Party officials, and US intelligence shows that even within the party, officials did not freely share information with their counterparts in Beijing, one official said.

The Chinese consulate in Washington did not reply to a request for comment.

The Office of the Director of National Intelligence and the CIA declined to comment.

Even before Americans started getting sick, the US intelligence community had been tracking that officials in Wuhan did not initially give Beijing the full picture about the severity of the situation there. But US officials also believe that there came a point where Xi did become aware of the full extent of the outbreak in Wuhan and realized that the virus was spreading but continued to downplay the situation publicly.

It is not clear when US intelligence officials assessed that Beijing was fully aware of the situation. A US official told CNN that there was a point in February where Xi's public comments and actions seemed to indicate the Chinese leader was realizing the virus was going to pose bigger problems than he initially thought, as he called for more action to be taken.

The Trump administration has looked into the possibility that the novel coronavirus spread from a Chinese laboratory rather than a market, according to multiple sources familiar with the matter, but it has presented no proof to back up that theory. Many renowned medical experts have said there is very little scientific proof that the virus came from a lab or was man-made.

Secretary of State Mike Pompeo has suggested the fault for the virus's staggering death toll worldwide lies with China and its political system, accusing Beijing's senior leaders of having no intention of being forthcoming with the world, even on a health matter with global consequences.

Some current and former national security officials are skeptical about reports that Beijing was unaware of the potential dangers of the new virus.

A US national security official who works closely on China matters argued that Beijing bears responsibility for any delays in communicating vital information about the virus to the world.

"I don't think Wuhan officials hid it from Beijing," this official told CNN. "From my experience, there were efforts from the very top not to make things public as quickly as they could. There were also efforts, after the fact, to try to lay the groundwork so that the locals would clearly take the fall for it."

The way China works, former senior CIA official Daniel Hoffman says, would make it very difficult for officials in Wuhan to keep news of the spreading virus to themselves. President Xi "has his own guys all over China, so you can't keep information from him," Hoffman said. "That's not quite possible there. He runs a brutal dictatorship; his spies are everywhere."

"The idea that some local officials could hide this from Xi is fanciful. It strains common sense," Hoffman said.

CORRECTION: This story has been corrected to reflect the accurate number of coronavirus deaths in the US.