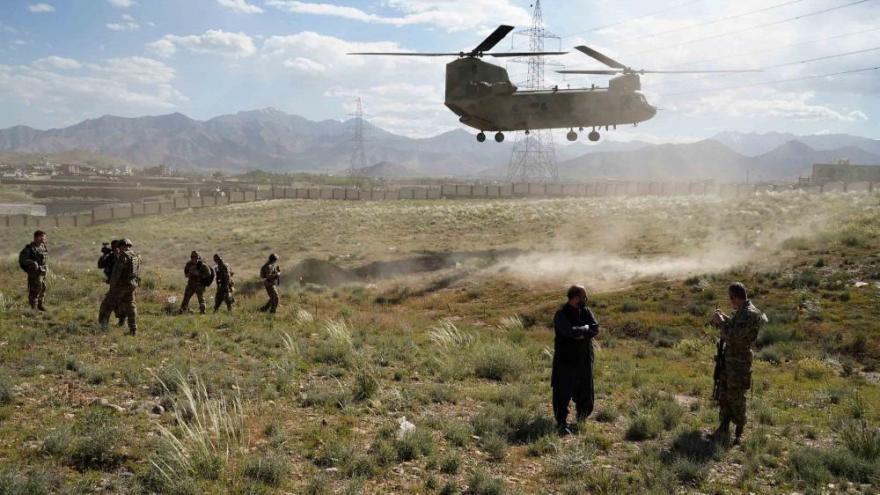 Two US service members died in a helicopter crash in Afghanistan on Wednesday, the US Forces Afghanistan press office said.

(CNN) -- The US military on Thursday identified the two soldiers killed in a helicopter crash in Afghanistan.

The crash happened while the helicopter was "providing security for troops on the ground" in Afghanistan's Logar Province, according to the statement.

On Wednesday, the US Forces Afghanistan press office said "preliminary reports do not indicate (the crash) was caused by enemy fire." The incident remains under investigation.

At least 19 Americans have been killed in combat in Afghanistan in 2019, and there have been more than 2,400 total deaths of US service members since the US first went into Afghanistan in October 2001.

Several other helicopter crashes have occurred in Afghanistan over the years, including one in 2017 that killed one US service member and injured six others. The Pentagon said at the time that the crash was not a result of enemy action. Another crash in 2013 left five US service members dead.

The US currently has about 14,000 service members in Afghanistan, alongside NATO troops, helping to train and advise Afghan troops and conducting counterterrorism operations.

President Donald Trump has floated reducing the number of US troops in the country to 8,600.

In September, Sgt. 1st Class Jeremy W. Griffin, a US Green Beret, was killed in a small arms firefight in the country's Wardak Province, making him the 17th American to be killed in combat there this year. Griffin was the first American to be killed after Trump said he canceled secret talks with the Taliban after the militant group took credit for an attack in Kabul, Afghanistan, that killed a dozen people, including an American soldier.