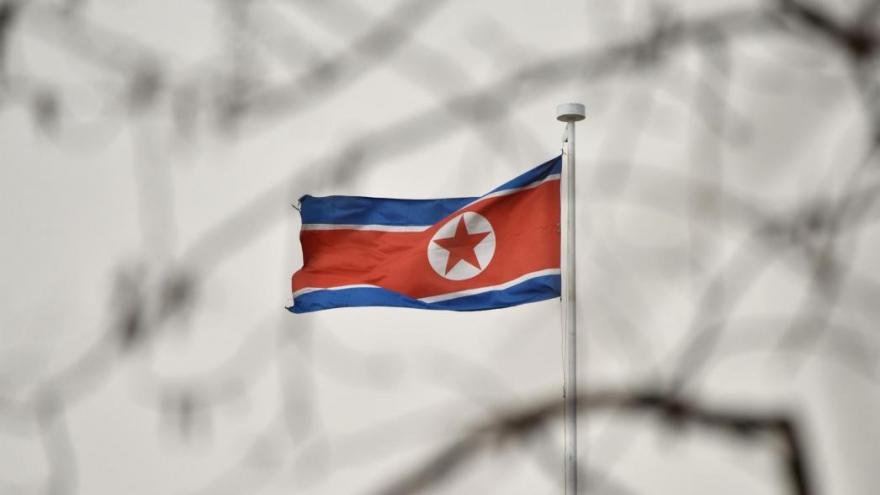 US intelligence has assessed that North Korea could be preparing to carry out their first weapons test since President Joe Biden came into office, according to several US officials speaking to CNN on condition of anonymity.

(CNN) -- US intelligence has assessed that North Korea could be preparing to carry out their first weapons test since President Joe Biden came into office, according to several US officials speaking to CNN on condition of anonymity.

The US officials are on alert as the US and South Korea conduct scaled-down, simulated military exercises and US Secretary of State Tony Blinken and Defense Secretary Lloyd Austin are in Asia for meetings with their Japanese and South Korean counterparts.

"We don't comment on intelligence matters," Defense Department spokesman Lt. Col. Martin Meiners said in a statement. "North Korea's continued development of ballistic missiles and weapons of mass destruction represent a threat to U.S. interests and the security of our allies and partners. In the near term, DoD, in close coordination with allies and partners, will seek to deter negative behavior from North Korea."

A test or provocation of some kind would not be a surprise, regional experts said.

"North Korea traditionally has done some kind of strongly provocative action early in both US and South Korean new administrations," said Bruce Klingner, a senior research fellow at the Heritage Foundation who pointed to tests conducted in 2017, shortly after former President Donald Trump took office, and in 2009, to mark former President Barack Obama's arrival in the White House. "The idea was to 'train them like a dog,' a North Korean defector told me," Klingner said, to squeeze concessions from the two, more powerful countries.

"So history would indicate they'd do something in the first few months of a Biden administration as well," he said. "If they do a provocation, it's perfectly predictable."

On Monday, Kim Yo Jong, the sister of North Korea's leader, warned the Biden administration against "causing a stink at its first step" on Monday, hours after the White House said it had not received a response to diplomatic overtures it had been making to Pyongyang.

White House press secretary Jen Psaki declined to respond to the comment Tuesday. "We don't have a direct comment or response to the comments made from North Korea," Psaki told reporters in a briefing on board Air Force One, en route to Philadelphia with the President. She pointed to the meetings between Blinken, Austin, and their counterparts, where "certainly, the security of the region will be a topic of discussion."

Later this week, Blinken and national security adviser Jake Sullivan are also headed to Alaska to meet with their Chinese counterparts, which Psaki also said will feature a discussion on "security in the region."

Blinken and Austin reaffirmed their commitment to the "complete denuclearization of North Korea" in Japan on Tuesday and to creating opportunities for further cooperation between the US, Japan, and South Korea, according to a statement from the US State Department.

They will hold meetings in South Korea on Wednesday local time.

One senior US official said North Korea might decide whether to go through with a test after seeing what comes out of Blinken and Austin's meetings in Asia.

On Tuesday, a senior US general issued a public warning about the threat posed by North Korea

"The Kim Jong Un regime has achieved alarming success in its quest to demonstrate the capability to threaten the U.S. homeland with nuclear-armed ICBMs, believing such weapons are necessary to deter US military action and ensure his regime's survival," Gen. Glen Van Herck, head of US Northern Command and responsible for the defense of the continental United States, told the Senate Armed Services Committee Tuesday.

The possibility of a test in the coming days has led Biden administration officials across several agencies to discuss how they would respond publicly if one happens, the officials said.

The officials would not be specific about what the latest intelligence shows, but a likely scenario, based on imagery and other intelligence, is that there could be a missile or rocket engine test. The last known North Korean weapons test was conducted in March 2020.

Over the last few days, US intelligence has been focused on vehicle activity at a site near Sanum-dong, outside Pyongyang, where ballistic missile and space launch vehicles are believed to have been built in the past.

There has also been activity at North Korea's nuclear facility, Yongbyon, according to analysis of new satellite images published by 38 North, a prominent North Korea monitoring group.

Officials tell CNN that if North Korea carries out a test while both secretaries are in Asia, it would send a pointed message to Biden that Kim wants to ensure he is seen as a key player in the region. However, a test would not come as a shock, with many analysts surprised Kim has refrained from carrying out one for so long.

A US response would vary depending on what, exactly, Pyongyang tested.

If North Korea does a nuclear test or an ICBM test, particularly a test of an ICBM they paraded in October 2020 that has been nicknamed the "Monster ICBM," that would be "concerning, it would be very provocative," Klingner said.

"It would be a violation of UN resolutions on a grand scale; it would require strong Biden admin response; and it would curtail diplomatic outreach. When they do something provocative, it puts a three- to six-month pause on diplomacy because no one wants to be seen rewarding that kind of behavior," he continued.

If Pyongyang tests a missile, the questions that will determine the US response will be what range did the missile have, how far did it travel and did it fly over Japanese territory, Klingner said. Rocket engine tests are "not really a violation, but not helpful," he said.

Trump ignored missile launches in latter part of his presidency

Trump ignored North Korea's record number of missile launches in 2019, arguing that they didn't violate Kim Jong Un's pledge not to launch nuclear or ICBM tests -- though the North Korean leader had announced he had no need to conduct those tests anymore because those programs were complete and UN resolutions require Pyongyang not to do any launches at all.

The Biden administration is still conducting a review of the Trump administration's North Korea policy, which could be completed "in the coming weeks," according to a senior State Department official.

While Biden isn't likely to write "love letters" to Kim Jong Un like his predecessor did, Biden's administration has yet to offer a clear break from the prior administration in its stated goals for its approach to the Hermit Kingdom. On multiple occasions, in testimony, statements or briefings, US officials have said their goal is "the complete denuclearization of North Korea."

Military and intelligence officials have long said they assess that North Korea continued with research and development of missiles and nuclear warheads throughout the Trump administration despite the public rhetoric from the Trump and now the Biden administrations about denuclearization.

This story has been updated with a statement from a Defense Department spokesman.