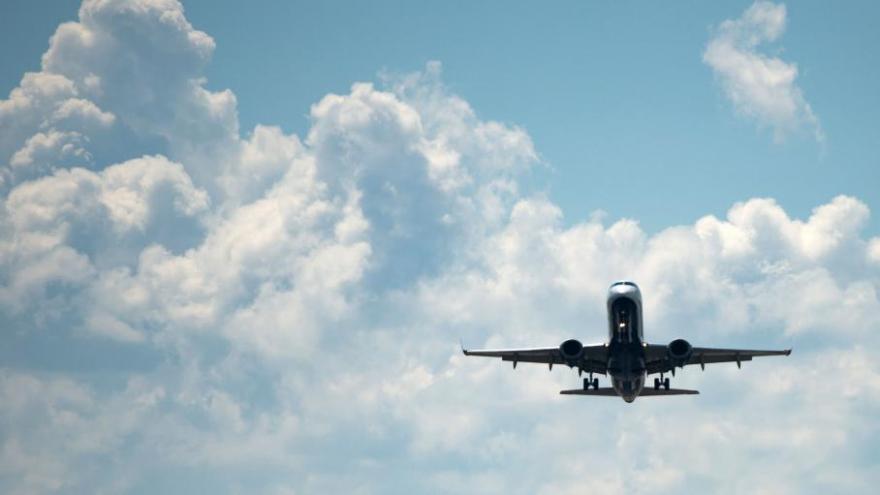 An airplane takes off from Ronald Reagan Washington National Airport in Arlington, Virginia, September 3, 2018, during the Labor Day holiday, the traditional end of the summer vacation season.

(CNN) -- The US government is urging Americans not to travel abroad after new restrictions went into effect Tuesday requiring all passengers traveling by air to present negative Covid-19 tests taken within three calendar days of departure or proof of recovery from the virus within the last 90 days.

"Seriously reconsider going overseas right now," acting Assistant Secretary of State for Consular Affairs Ian Brownlee told reporters on a call Tuesday. "US citizens who choose to go abroad, whether it's for a holiday or a genuine emergency, everyone needs to be prepared to be potentially seriously disrupted in their trips."

"If you cannot easily access a Covid-19 test, or if you test positive, you will end up overseas for much longer than you planned," Brownlee added. "If that happens, you will be responsible for covering your own lodging and medical costs during that time."

The Centers for Disease Control and Preventions' director for the Division of Global Migration and Quarantine, Marty Cetron, said on the same call that the "bottom-line message is this is really not a time for people to be engaging in discretionary travel, and that all travel should be postponed until we get a better handle on getting this virus under control, and accelerating our vaccination strategies."

Despite the warnings, Brownlee said the State Department is not considering issuing a global Level 4: Do Not Travel advisory and will continue to issue advisories on a country by country basis. The department issued the worldwide warning against international travel last March and lifted it in August, but it said at the time that it continued "to recommend U.S. citizens exercise caution when traveling abroad due to the unpredictable nature of the pandemic."

READ: The new US Covid-19 test requirement for travelers: What you need to know

Brownlee said Tuesday that the State Department is "committed to helping US citizens overseas who find themselves in dire situations, but that assistance is likely to be limited."

"Our goal is to help people avoid those dire straits in the first place," he said. US embassies will be able to provide information about where to get medical care and Covid tests, Brownlee said, but will not provide those tests.

The new testing requirement went into effect shortly after President Joe Biden's reinstatement of Covid-19 travel restrictions on non-US citizens who have been in Brazil, Ireland, the United Kingdom and much of Europe. It comes as new Covid variants have been detected in countries around the world. The CDC's Cetron noted that the US government is watching the variants "very closely"

"As these variants increase, the risks of international travel really are highlighted by the urgency that President Biden and this administration have taken to combat the virus and use all measures that we have at our disposal here," he said. "As a consequence we reposted the original order that CDC issued on January 10, January 12, that came into effect today."

"Most importantly, the waiver that was initially contemplated to extend the deadline of implementation by a couple of weeks has been removed from this order, although we've specifically added a particular humanitarian emergency exemption to take into account," Cetron added.

He said the decision to remove the waiver had been made because "it was determined that we needed to bring this testing strategy into implementation rapidly today and not allow for an additional two weeks."

"Additionally, when we looked at the surges of this virus that have happened, in particular in the months before Thanksgiving and through the holiday season -- Thanksgiving, Christmas and New Year's -- we were just seeing surge upon surge in the virus at a time when more of the variants were proving themselves increasingly contagious," he said. "And it was a combination of all these factors which led to the urgency of removing the two-week additional extension for implementation, and to move this into effect immediately at 12:01, midnight."

Cetron told reporters they "are holding daily morning operation calls with the airlines to ... get feedback on the early rollout and implementation." He said any issues that have come up overnight were "anticipated" and they "have various hotlines that are available in order to adjudicate things that may come up in the middle of the night."

Both officials suggested conversations were ongoing about possible restrictions for travel over land borders.