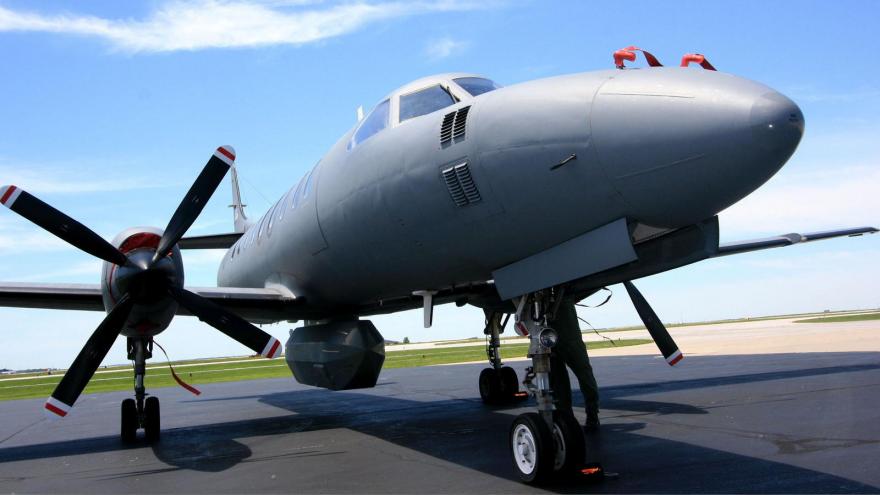 Thermal imaging devices are typically mounted on RC-26B planes, like this one, according to US military documents.

(CNN) -- A small Cessna Citation jet flying straight into Washington's highly restricted airspace would typically be met with fighter jets on its wing. But when one flew over the nation's capital on June 1 and circled the White House 20 times, it was hardly an accident.

The plane was only one of several aircraft -- both piloted and unpiloted -- that CNN has been able to track flying over protests in Washington, Minneapolis and Las Vegas. Government watchdogs fear the planes were used to track protesters and perhaps capture cell phone data.

The government's use of surveillance planes to watch over those protesting the police killing of George Floyd has captured the attention of nearly three dozen Democrats in Congress who want to know whether the planes -- typically equipped with live video cameras and heat sensors -- were used for "surveilling of Americans engaged in peaceful protests."

In a June 9 letter to the heads of the FBI, Drug Enforcement Administration, Customs and Border Protection and the National Guard, lawmakers demanded an end to the practice "immediately and permanently" and called the use of aircraft above protests a "deep and profound" breach of Americans' First and Fourth Amendment rights.

The letter points to a trio of government aircraft flown over protest cities. CNN has independently verified that the flights took place, using publicly available flight path data from websites such as ADS-B Exchange. The site is known as "the world's largest source of unfiltered flight data."

The FBI has not specifically confirmed or denied the use of aircraft to surveil protests. But in a statement to CNN when asked about the flights, the FBI said it has been "focused on identifying, investigating, and disrupting individuals that are inciting violence and engaging in criminal activity."

ADS-B Exchange data shows an RC-26B -- a twin-engine turboprop typically used by the FBI and the National Guard for drug interdiction -- over Washington and Las Vegas. A National Guard fact sheet says the same type of plane is normally outfitted for thermal imaging and "can be used both day and night to monitor illegal activity."

An RC-26B did at least 50 circles above Washington for nearly four hours on the evening of June 2nd, the city's fourth straight night of protests. A similar flight occurred over Washington the following night. Data shows a different RC-26B flew over Las Vegas as protests took place there on June 2 and June 3.

Of the flights over Washington, Democratic Sen. Chris Murphy of Connecticut tweeted, "I have questions," adding that this was the "first time I can find that this aircraft, normally used for war zones/disasters/narcotics, has been used to gather intel at a protest."

The letter also says that the FBI may have flown a Cessna Citation jet "equipped with 'dirtboxes,' equipment that can collect cell phone location data," over Washington.

ADS-B Exchange data shows the same type of aircraft departed from Manassas Regional Airport in northern Virginia at 11:11 p.m. on June 1, hours after police forcibly cleared peaceful protesters from in front of the White House.

The jet climbed to an altitude of 17,000 feet and did at least 20, eight-mile-wide, counterclockwise circles centered on the White House before landing at back at Manassas after 1:30 a.m.

Data shows that the same plane took off from Manassas around the same time on the next two nights as well as June 6, flying a nearly repeat flight path over Washington.

The National Guard confirmed to Murphy that an RC-26B surveillance aircraft, operated by the West Virginia Air National Guard, was involved in responding to protests in the DC area but that such flights have since been suspended, according to a Senate staffer with direct knowledge of the situation.

"The national guard confirmed that it was air national guard and that it was an aircraft out of West Virginia. But the Department of Defense has not given any more information," the staffer told CNN, adding that the directive to calt these flights was made after lawmakers raised questions. Early appearances of surveillance flights began as early as May 29 when flight data shows a US Customs and Border Protection MQ-9 Predator B making a hexagonal pattern at 22,000 feet above Minneapolis where Floyd was killed days earlier.

In a letter to Congress, the Department of Homeland Security said that the unpiloted drone "was preparing to provide live video to aid in situational awareness at the request of our federal law enforcement partners in Minneapolis," but when "no longer needed for operational awareness" returned to base in North Dakota. The letter did not say which agency initially requested the flights.

Customs and Border Protection has been using the remotely piloted Predator B since 2005, agency documents show, "to safely conduct missions in areas that are difficult to access or otherwise too high-risk for manned aircraft or CBP ground personnel."

Agency fact sheets say the aircraft can record video to "document suspect activities for evidentiary use." An armed, United States Air Force version of the Predator B, known as a Reaper, was used to shoot the Hellfire missiles that killed Iranian Major General Qasem Soleimani on January 3.

"The use of aerial surveillance is deeply disturbing, especially as we're seeing so much misconduct against protesters across the country," said Jake Laperruque, senior council with the Project on Government Oversight, a government watchdog group.

"Aerial surveillance can be used to identify and track individuals in a number of ways, so it's certainly improper to deploy this powerful surveillance tools to monitor protesters," he said. "Even if abuse isn't occurring, the mere risk could significantly chill free speech."

Witnesses with a background in identifying aircraft types spotted other airplanes circling overhead Washington on protest nights -- what appeared to be a Cessna Caravan and Cessna 182.

The single-engine private airplanes are typically banned from loitering in the highly restricted airspace over Washington, but CNN was not able to track the aircraft using flight path databases. Those who routinely monitor flight path data tell CNN it is possible that the flights had special FAA approval to operate with their transponders turned off, making tracking more difficult. Light general aviation aircraft typically cannot operate in the Washington, DC, Flight Restricted Zone without a transponder.

It was not just high-altitude flights taking place over protest cities. The District of Columbia National Guard said it is reviewing its own use of helicopters over the demonstrations, including "an investigation into a June 1 low-flying maneuver conducted by one of our rotary aviation assets." That helicopter blew debris around protesters who remained on the street after a city-imposed curfew.

CORRECTION: This story has been updated to reflect the air national guard plane that circled Washington, DC, flew out of West Virginia.