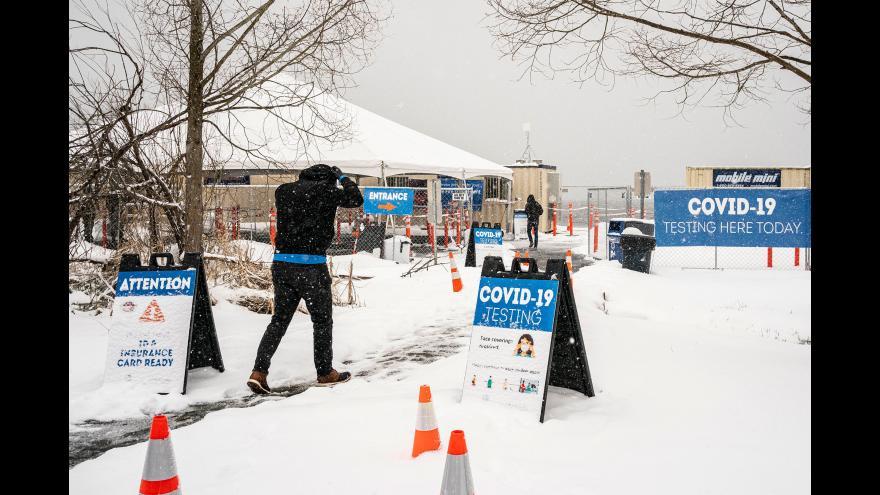 Severe weather around the United States will delay Covid-19 vaccine deliveries in the coming days, the US Centers for Disease Control and Prevention said Wednesday.

(CNN) -- Severe weather around the United States will delay Covid-19 vaccine deliveries in the coming days, the US Centers for Disease Control and Prevention said Wednesday.

"Shipping partners are working to deliver vaccine where possible, contingent on local conditions, but the adverse weather is expected to continue to impact shipments out of the FedEx facility in Memphis, Tenn., as well as the UPS facility in Louisville, Ken., which serve as vaccine shipping hubs for multiple states," CDC spokesperson Kristen Nordlund said in a statement.

"CDC and federal partners are working closely with the jurisdictions, as well as manufacturing and shipping partners, to assess weather conditions and help mitigate potential delivery delays and cancellations," she said.

Delays in Covid-19 vaccine delivery due to the weather could continue "for the next week to two weeks," Lori Tremmel Freeman, chief executive officer of the National Association of County and City Health Officials, told CNN on Wednesday.

"The two biggest shippers involved here -- UPS and FedEx -- have major either hubs or warehouses down in the South, in Memphis and in other areas. So, we do expect there could be a blip in delivery of vaccine that is weather-related specifically," Freeman said.

Freeman said weather-related concerns were discussed briefly during a phone call between local health officials and the Biden administration on Tuesday.

In a statement Wednesday, FedEx said it had "contingency plans in place to help lessen the effect of inclement weather on operations and service, and we are implementing those plans as we're able."

The company said the weather had impacted much of its US network, including pickups and deliveries in certain cities.

"We have contingency planning in place related to the movement of vaccines, which have priority status within our network, and are working directly with our customers to help ensure their safe transport and delivery," the statement said.

UPS spokesperson Glenn Zaccara said in a statement that pickups and deliveries would be made "as soon as conditions safely permit."

"We have extensive contingency plans for storms that help us to keep goods moving when roadways are impassable or airports are closed because of severe weather."

NYC to 'run out' of doses, mayor says

New York City on Wednesday had fewer than 30,000 first doses on hand due to weather-related shipment delays, according to Mayor Bill de Blasio.

"On top of that we've got the weather problem, all over the nation there's huge storms that are now causing delays in shipment."

Vaccine shipments expected Tuesday and Wednesday were delayed, he said. As many as 30,000 to 35,000 appointments -- or even more -- might not be scheduled as a result.

"We're going to have to hold back appointments that New Yorkers need," de Blasio said.

The city has administered 1,395,956 doses, more than the total population of Dallas, Texas.

Florida officials blamed winter weather across the country for the shipment delay of 200,000 Moderna Covid-19 vaccine doses, according to Jason Mahon, spokesman for the Florida Department of Health.

The shipment was scheduled to arrive Tuesday, Mahon said.

The state has notified vaccine providers about the delay and asked them to reschedule appointments instead of canceling them, Mahon said.

Florida is expecting to receive next week's full allocation of the vaccine, according to Mahon.

More than 43,000 appointments affected in Indiana as 80 clinics closed

Weaver said this week that the state also experienced delays in vaccine shipments because of the weather. The state has not received its Moderna vaccines for this week, and appointments will need to be rescheduled, according to Weaver.

Indiana will keep vaccine eligibility at age 65 and older until deliveries get back on schedule. Then the state plans to open eligibility to those ages 60 to 65, Weaver said.

"We will see how the weather continues to impact our shipments, but hopefully we will be able to expand as soon as sometime next week," Weaver said.

President Biden: 'Vaccine will be widely available by end of July'

President Joe Biden said Tuesday night that Covid-19 vaccines will be widely available to the general public by the end of July. During the first town hall of his presidency, Biden offered some hope -- with a specific promise against which he will be judged -- for 600 million doses of vaccine to be available by the end of July.

Biden predicted that life could be mostly back to normal by Christmas.