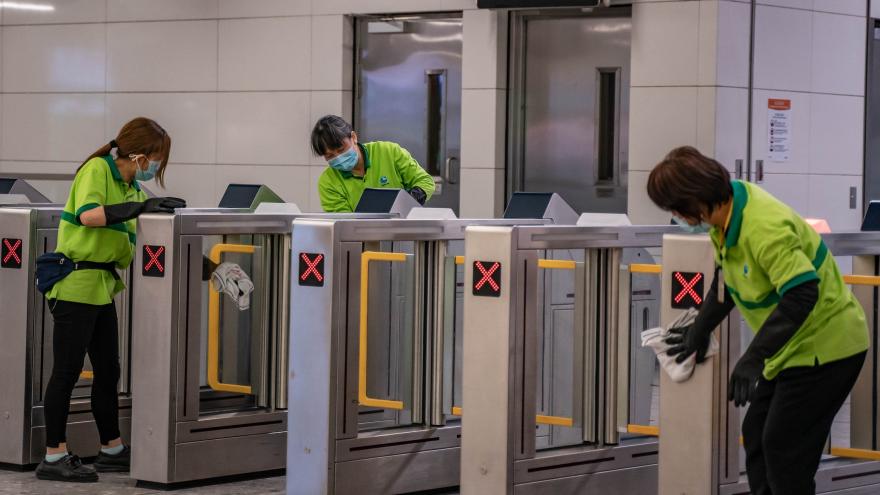 (CNN) -- The novel coronavirus has been declared a public health emergency in the United States, Health and Human Services Secretary Alex Azar said in a White House briefing on Friday.

Once the declaration goes into effect at 5 p.m. ET Sunday, US citizens returning to the United States who have been in China's Hubei province in the two weeks before their return will be subject to up to 14 days of mandatory quarantine, Azar said.

US citizens returning from the rest of mainland China in the two weeks prior will face a health screening at a select number of ports of entry, he said. Those citizens also face up to two weeks of monitored self-quarantine to ensure they pose no health risk.

President Donald Trump has signed a proclamation suspending the entry of foreign nationals who have traveled in China in the last two weeks, Azar said, and could pose a risk of spreading the coronavirus. Foreign nationals who are the immediate family of US citizens or permanent residents are exempt.

"These prudent, targeted and temporary actions will decrease the pressure on public health officials screening incoming travelers, expedite the processing of US citizens and permanent residents returning from China, and ensure resources are focused on the health and safety of the American people," Azar said.

"I want to stress: the risk of infection for Americans remains low," he added. "And with these and our previous actions we're working to keep the risk low."

Azar's announcement came as the US Centers for Disease Control and Prevention announced the seventh confirmed coronavirus case in the US. The seventh patient is an adult male in Santa Clara County in northern California, the third confirmed case in the state.

The outbreak has so far killed at least 213 people and infected more than 9,000 others in China, most of them in Wuhan. There are at least 140 confirmed cases outside of mainland China.

Earlier Thursday the CDC ordered a federal 14-day quarantine for the 195 Americans on an Air Force base in California recently evacuated from Wuhan, China, the epicenter of the coronavirus outbreak.

It's the first such order in more than 50 years.

"While we recognize this is an unprecedented action, we are facing an unprecedented public health threat, and this is one of the tools in our toolbox to mitigate the potential impact of this novel virus on the United States," said Dr. Nancy Messonnier, director of CDC's National Center for Immunization and Respiratory Diseases.

The group of 195 Americans, many of them diplomats and their families, arrived by plane Wednesday at March Air Reserve Base in Riverside County, California, and were staying at the base under a three-day voluntary quarantine.

US health officials previously said they wouldn't issue a blanket quarantine for the evacuees, as some agreed to stay at the base voluntarily longer than 72 hours.

Then Thursday, one of the passengers tried to leave the base and was ordered to stay there in quarantine for a 14-day incubation period "or until otherwise cleared," Riverside County Public Health said in a statement.

A longtime CDC adviser told CNN Friday morning the agency should consider extending the three-day quarantine because other countries are doing the same for citizens returning from Wuhan. Those include France, South Korea and Australia.

The CDC adviser pointed to a report published Thursday night in the New England Journal of Medicine showing that infected people can transmit the virus before they develop symptoms.

According to the study, there were five instances of asymptomatic transmission of the Wuhan virus in one cluster. A woman in Shanghai was infected by one of her parents, who had no symptoms. That woman flew to Germany and while she was asymptomatic transmitted the virus to two colleagues. One of those colleagues, while healthy, transmitted the virus to two more coworkers.

The last time such a quarantine order was issued was in the 1960s for smallpox evaluation, Dr. Martin Cetron, director of CDC's Division of Global Migration and Quarantine, told reporters Friday.

"We believe that this approach of having a quarantine for the incubation period offers the greatest level of protection for the American public in preventing introduction and spread," Cetron said. "That is our primary concern."

'Is this a nightmare?'

Jarred Evans, one of the 195 passengers from Wuhan, told CNN Thursday he "will stay as long as I need" at the military base.

The passengers are wearing protective masks and are spending some time outdoors.

"We're all still taking major precautions. So, it's not like we're around here hugging each other and shaking hands and things like that," Evans said.

Evans spent more than a week holed up in his apartment in Wuhan as coronavirus raced through Wuhan before he landed in the US on the chartered flight. During that time, he said, residents sent panicked messages, warning others to take precaution.

"It hit fast and ... it just was very hectic for, like, three days straight," he said. "I got the news from my Chinese friends saying, 'Hey, stay inside. Wear a mask. Don't go outside, stock up on some food because this is going to get serious.' And as you can see, it's very serious."

"When you're there and there's no transportation, no trains, no subways, no planes, the military is blocking off each and every aspect of the road. No Ubers, nothing. Mom and pop stores are closed. You think to yourself, like, is this real? Is this a movie? Is this a nightmare?" he said.