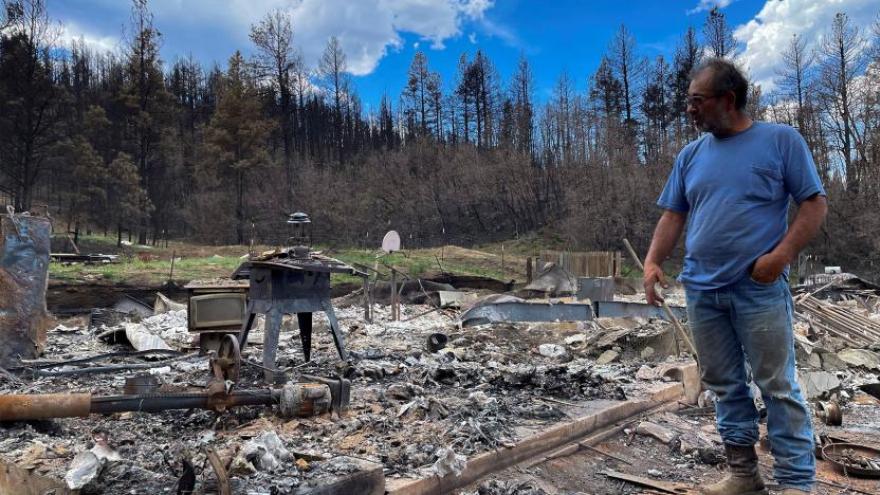 Daniel Encinias stands next to the ruins of his home, which was destroyed by the Hermits Peak/Calf Canyon fire in Tierra Monte, New Mexico.

A years-long backlog of projects owing to department furloughs during the 2018-2019 government shutdown, complications of working from home during the Covid-19 pandemic and an injunction related to the Mexican Spotted Owl all restricted the Forest Service's ability to thin trees and conduct prescribed burns in the years prior to spring 2022, according to the report.

That string of events "built a sense of urgency to accomplish projects to 'catch up,'" the report stated. "These expectations, coupled with the opportunity to implement during a narrow window when the crew was available, smoke dispersion was good and the prescribed fire area was forecasted to be in prescription, led to acceptance of unforeseen risk."

A prescribed burn, or a controlled burn, is one set intentionally as part of a forest-management plan to reduce the risk of more serious and damaging blazes.

The report found that the prescribed fire that ultimately started the Hermits Peak fire -- which has burned more than 340,000 acres in three counties since April 6 and is 72% contained as of Tuesday -- was done "according to current standards and policy," but several other factors increased the probability of an escaped prescribed fire.

"The combination of changes in fuel conditions, underestimated potential fire behavior outside the burn unit, and conducting the prescribed fire on the warmer and drier end of the prescription, led to an increased probability of an escaped prescribed fire, if the burn spread beyond the unit boundary," the report states.

The report went on to say that prescribed fires must remain a tool to combat wildfires, but climate change is having an impact on its safe use.

"Wildfires are threatening more communities than they ever have. Prescribed fire must remain a tool in our toolbox to combat them. Unfortunately, the effects of climate change are narrowing the windows where this tool can be used safely," the report added.

In a foreward to the report, US Forest Service Chief Randy Moore said climate change is leading to more intense and frequent wildfires and "conditions on the ground we have never encountered."

Forest Service officials said that multiple years of drought, limited snowpack with less moisture than normal, combined with a pileup of fuels helped spur the fire.

"Traditional monsoon precipitation was significantly below the historic average in 2019 and 2020," the report said, adding overall precipitation in 2021 was also "near to below average for the northern New Mexico mountains."

In addition, the winter snowpack fell far short of what was needed to bring moisture back to the ground and fuels, Forest Service officials said. The lack of snow until a strong snowstorm in March and April amounted to what officials called a "snow drought."

"Along with below normal precipitation, the seasonal snowpack was significantly compressed, as it did not start until January then abruptly melted off much earlier than average," the report stated. Even though the winter weather was cold, the lack of moisture in the snow until a spring snowstorm didn't help dry conditions.

"I cannot overstate how heartbreaking these impacts are on communities and individuals," Moore said in the foreword. "In the most tragic events, people have lost their lives and it grieves us as agency employees who live and work in these communities."