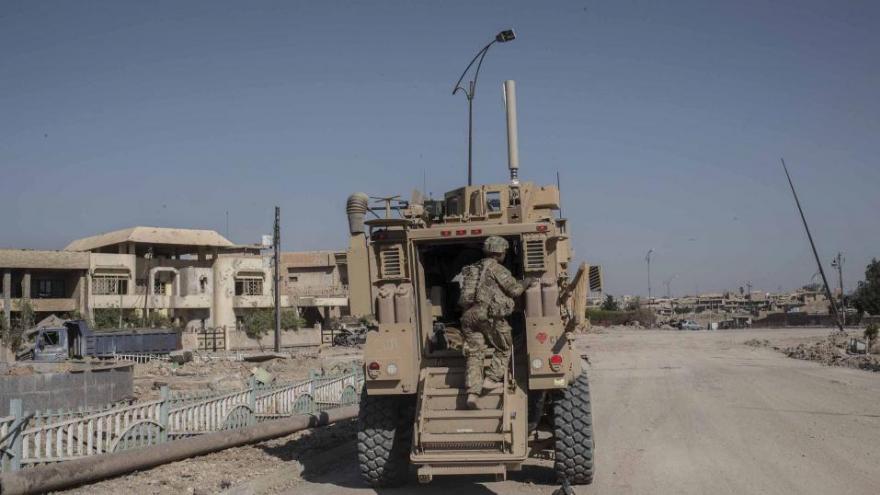 The Biden administration is eying an eventual withdrawal of US troops from Iraq as the country's security forces grow more capable and the threat of ISIS wanes A U.S. Army 82nd Airborne Division team and an MRAP are shown on June 21, 2017 in west Mosul, Iraq.

(CNN) -- The Biden administration is eying an eventual withdrawal of US troops from Iraq as the country's security forces grow more capable and the threat of ISIS wanes, the two countries announced in a joint statement Wednesday.

The timing of the exit will be determined in upcoming "technical talks," which have not yet been scheduled, to discuss the process of withdrawal, said chief Pentagon spokesman John Kirby.

The US currently has some 2,500 troops in Iraq focused on the mission to defeat ISIS as part of Operation Inherent Resolve, the global coalition to defeat what remains of the ISIS caliphate that controlled parts of Iraq and Syria. The troops have now shifted to training and advisory tasks, "thereby allowing the for the redeployment of any remaining forces from Iraq," the joint US-Iraq statement said.

"U.S. forces are in Iraq at the invitation of the Iraqi Government for the sole purpose of supporting Iraqi forces in the campaign against ISIS, and of course, that campaign remains important and it remains ongoing," said State Department spokesman Ned Price.

The announcement of the technical talks comes as the Biden administration tries to plan its next steps on Afghanistan with a looming May 1 withdrawal deadline. President Joe Biden has not said yet whether he intends to remove the remaining 2,500 troops from the country in the next three weeks or pursue a more gradual withdrawal over time.

Now Biden is looking at removing troops from two of America's longest wars, even if there is no timeline set on Iraq. There was no specific date set for a full withdrawal or a target number of troops to remove by a certain deadline, Kirby said.

The announcement comes as Defense Secretary Lloyd Austin is conducting a global review of US forces, looking at the size, scope and mission of troop deployments around the world. Any decision on troop levels in Iraq will be made in consultation with the Iraqi government, Kirby noted.

"We always will, in any operational environment, continue to look at our footprint and our force posture and determine whether it's appropriately sized and scoped to the mission," Kirby said. "The invitation from the Iraqi government is still in place and we're continuing as we have been, even before today's talks, to talk with the Iraqi government about what that mission and that footprint is supposed to look like."