US envoy for Afghanistan steps down following chaotic evacuation 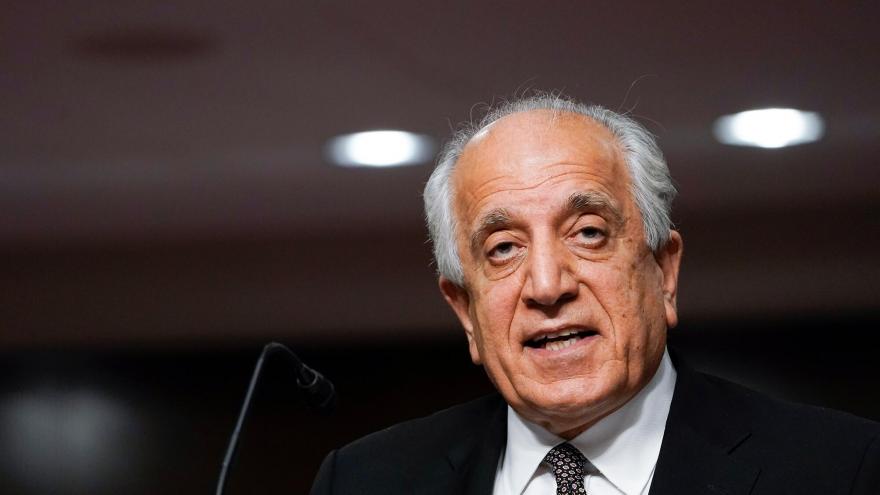 Ambassador Zalmay Khalilzad, pictured here in Washington DC on April 27, will "transition" out of his role and be replaced by his deputy, Tom West.

(CNN) -- The Biden administration's top envoy for Afghanistan is leaving his position, the US State Department confirmed in a Monday announcement, less than two months after the US withdrew from Afghanistan in a chaotic -- and deadly -- evacuation process.

Ambassador Zalmay Khalilzad will be replaced by his deputy, Tom West, who led Afghan policy for the Biden presidential transition team and has been working closely with Khalilzad for months.

CNN reported earlier Monday that the Biden administration was expected to announce Khalilzad's departure. In a letter to Blinken obtained by CNN, Khalilzad said he decided it was the right time to step down "at a juncture when we are entering a new phase in our Afghanistan policy."

"The political arrangement between the Afghan government and the Taliban did not go forward as envisaged. The reasons for this are too complex and I will share my thoughts in the coming days and weeks, after leaving government service," Khalilzad wrote in the letter, which is dated Monday.

Khalilzad served under Presidents Donald Trump and Joe Biden as the Special Representative for Afghanistan Reconciliation. A diplomatic veteran who is well-known in foreign policy circles, Khalilzad has also served as a US ambassador to Iraq and the United Nations.

Khalilzad led the talks with the Taliban in Qatar that resulted in the Doha agreement with the Trump administration to fully withdraw US troops by May 2021, a role which brought him considerable scrutiny. In 2019, then-Afghan National Security Adviser Hamdullah Mohib accused Khalilzad of being motivated by personal political gain rather than achieving peace.

"He is ostracizing and alienating a very trusted ally and partner," Mohib said of Khalilzad at the time.

During those talks, Khalilizad's counterpart was Taliban co-founder Abdul Ghani Baradar, who was recently named Afghanistan's acting deputy prime minister. At times, Khalilizad had a contentious relationship with Afghan government officials who viewed him as favoring the Taliban. Khalilizad's own deeply personal ties to Afghanistan, where he was born, and his free-wheeling approach to the negotiations have also been viewed as controversial by some and effective by others.

But Khalilzad was asked by the Biden administration to stay on after Biden won the election even though, traditionally, an incoming administration replaces politically appointed officials with their own team, particularly on foreign policy matters with such significance.

With the May deadline looming, Biden announced all troops would be out by the 20th anniversary of September 11th.

Khalilzad was expected to leave in May, the source who was briefed said, but then agreed to stay longer than originally planned.

His deputy, West, has been active, traveling earlier this month to Doha for the first face-to-face meetings with the Taliban since the American departure. Since gaining control of the country, the Taliban have been accused of dire human rights abuses, including the unlawful killing of 13 minority Shia Hazaras. Afghanistan's health care system has collapsed and there are serious food shortages.

West accompanied the CIA's deputy director, David Cohen, on that trip and had also been on a previous trip in late August to Kabul with CIA Director Bill Burns to meet the top Taliban leader in Kabul, according to one of the sources.

The US State Department called the latest talks with representatives of the Taliban "candid and professional" while emphasizing that the Taliban "will be judged on its actions, not only its words."

"The U.S. delegation focused on security and terrorism concerns and safe passage for U.S. citizens, other foreign nationals and our Afghan partners, as well as on human rights, including the meaningful participation of women and girls in all aspects of Afghan society," a readout from the State Department said earlier this month. "The two sides also discussed the United States' provision of robust humanitarian assistance, directly to the Afghan people."

Taliban spokesperson Zabihullah Mujahid had told reporters, "We had a detailed discussion with the American delegation in Doha."

Since the Taliban have taken control of Afghanistan, the State Department has declined to detail what the plans are for Khalilzad. Last month, spokesman Ned Price acknowledged Khalilzad had returned to the US from Doha and noted that there was now a US diplomatic mission for Afghanistan in Qatar led by another senior diplomat.

This story and headline have been updated with additional information Monday.