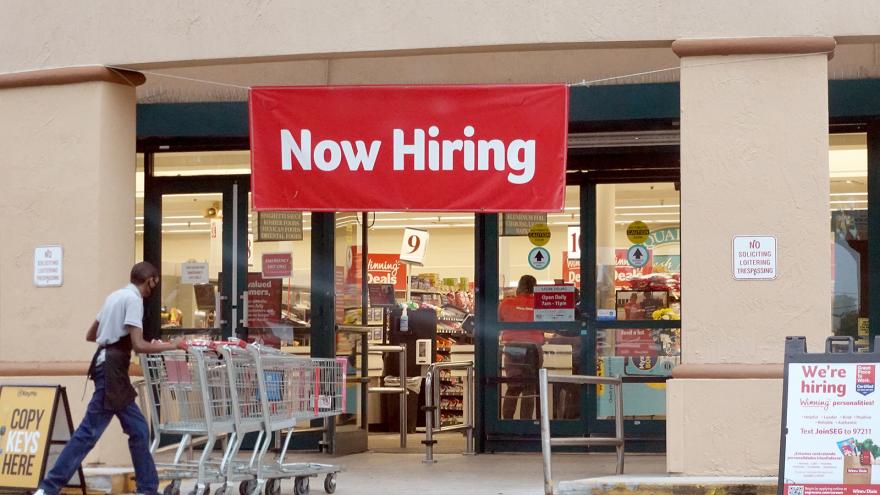 (CNN) -- America's economic recovery has hit a roadblock: US employers added only 194,000 jobs in September, another troubling sign that Covid is disrupting the economy.

It marked the second-straight month in which the US economy added far fewer jobs than expected. Jobs growth slowed down dramatically in August.

Have you lost your pandemic unemployment benefits? Tell us about it.

And the report did have some good news: The disappointing August report was revised higher by 131,000 jobs, which means employers added 366,000 the month before last. (Even so, the August report remained far below analysts' initial expectations.)

"The weak jobs report shouldn't be a surprise given the survey for it was taken near the peak of the Delta variant wave on September 12," said Robert Frick, corporate economist at Navy Federal Credit Union. "Hundreds of thousands of jobs that could have been added in the leisure and hospitality industry alone had to wait until coronavirus infections and deaths dropped, as is happening now."

Daniel Zhao, senior economist at Glassdoor wouldn't even go as far as calling the report a mixed bag.

"On the one hand, this shows us how big the impact from the Delta variant really was... but hopefully with the Delta wave receding the September report will be the worst of it," he told CNN Business.

In the late summer, rising Covid-19 infections from the Delta variant kept people at home. Many grew wary of spending time in large groups.

Another sector that didn't do great in September was education. Employment in local government education dropped by 144,000 and another 17,000 in state government education. Education is a major employer of women, so that added concerns about equality in the labor market recovery. Women lost 26,000 jobs last month, while men gained jobs.

But there's some seasonal weirdness at work, the BLS warned in its report. Because the back-to-school hiring that normally occurs in September was lower this year, the seasonally adjusted jobs numbers showed a decline.

"Recent employment changes are challenging to interpret, as pandemic-related staffing fluctuations in public and private education have distorted the normal seasonal hiring and layoff patterns," the BLS said.

We already know this pattern from last year, said Zhao, so it shouldn't have come as a surprise.

"I think many schools are still running with a leaner workforce than before the pandemic," Zhao said.

Hiring picked up at the end of the month, though, according to Frick, who expects that trend to accelerate through October.

What this means for the Fed

This jobs report was also important for the Federal Reserve. The central bank announced last month that it is getting ready to roll back its huge pandemic stimulus program by tapering its monthly asset purchases.

During the September monetary policy update, Fed Chairman Jerome Powell said he didn't need the jobs report to be a "knock out" because he believes the labor market recovery was coming along nicely. Some of his colleagues, however, might still want to see further improvements, Powell said at the time.

While America's labor market is still not back to its pre-pandemic strength, it has made up a lot of lost ground.Businesses are having a hard time finding staff, which is pushing up wages. Average hourly earnings over the 12-month period ending September grew by 4.6%, the biggest increase since February.

Whether Friday's jobs gains will be enough to satisfy the policymakers remains to be seen. The Fed doesn't meet in October. The next central bank meeting is in early November, with its policy decision to be announced on November 3.