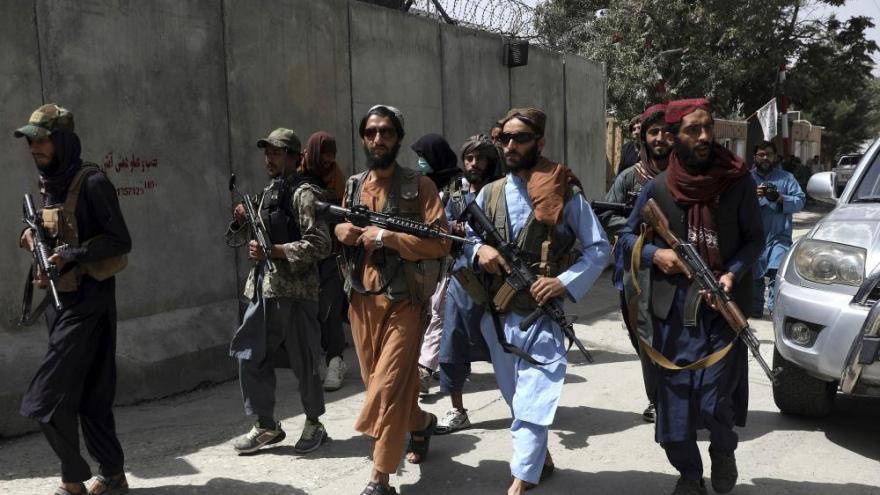 US diplomats wrote a classified cable to Secretary of State Antony Blinken in mid-July warning that swift action needed to be taken because they believed the situation in Afghanistan could rapidly deteriorate and pictured Taliban fighters in Kabul on Aug. 18.

(CNN) -- A group of US diplomats wrote a classified cable to Secretary of State Antony Blinken in mid-July warning that swift action needed to be taken because they believed the situation in Afghanistan could rapidly deteriorate and they feared a catastrophe.

They laid out how the department should act quickly to process and evacuate Afghans who had assisted the United States and get them out of the country quickly.

The diplomats decided to send the dissent memo because they felt previous warnings and recommendations they had made were being ignored and labeled alarmist, two State Department officials told CNN.

The classified cable, signed by more than a dozen US diplomats, urged specific steps to be taken, including starting a biometric enrollment program for the Afghans applying for Special Immigrant Visas (SIV) or refugee status ahead of the evacuation, so they wouldn't waste time before what they believed would be the imminent collapse of the Afghan government as the US withdrew.

The State Department responded to the cable within days of receiving it and followed through on some of the issues it raised, said a source familiar with the matter. But not all of the recommendations in the memo were quickly implemented, the diplomats said.

The question of what advice was not heeded is likely to draw further scrutiny from lawmakers as they examine whether the administration could have done more to stop the chaos unfolding on the ground in Kabul after the fall of the Afghan government. The top Republican on the House Foreign Affairs Committee, Rep. Michael McCaul, has already called for a briefing about the cable.

On Thursday, Deputy National Security Adviser Jon Finer did not deny that diplomats in Kabul warned the administration of a potential coming catastrophe in Afghanistan, but said that the dissent cable "predicted the potential fall of the Afghan government in the aftermath of the US troop drawdown on August 31."

"Obviously, that all happened even more quickly than the cable -- which was quite concerned about this possibility -- projected," Finer told CNN's Wolf Blitzer on "The Situation Room" Thursday.

"I think the cable reflects what we said all along, which is nobody had this exactly right in predicting that the government and army of Afghanistan were going to collapse in a matter of days," he said.

In a statement to CNN, State Department spokesperson Ned Price declined to comment on the contents of the cable, but said, "the Secretary reads every dissent and reviews and clears on every reply."

"He's made clear that he welcomes and encourages use of the Dissent Channel, and is committed to its revitalization," Price said Thursday. "Just as importantly, we incorporate the Channel's constructive and thoughtful ideas into our policy and planning."

"Maintaining the channel's integrity and the notion of disciplined dissent is key to that revitalization. It's why we keep communication strictly between the Department's leadership and the authors of the dissent messages and why we don't comment publicly on the substance of messages or the replies, regardless of the classification," he said.

Price also said that the Biden administration values the dissent memo mechanism. "We value constructive internal dissent. It's patriotic. It's protected. And it makes us more effective."

The Wall Street Journal was first to report on the cable.

Dissent memos are designed as a way for diplomats to express concern over a policy when they feel they have not been heard through other means.

A source familiar with the matter noted that the department had stood up a task force focused on the Special Immigrant Visa processing in an effort to do everything possible to speed it up.

The memo also called for an airlift operation for Afghans, which was announced the day after the cable was received, the sources said.

In his interview on CNN, Finer also underscored that the administration had responded to at least some of the concerns outlined in the memo.

"The second thing the cable asked for was evacuation flights by the US government of special immigrant visa applicants ... they asked for those to begin by August 1. We began those flights in July," he said.

The first evacuation flight arrived in the US on July 30, after pressure not only from the diplomats, but also bipartisan lawmakers and advocates.

In the wake of the Taliban's rapid takeover of Afghanistan, many diplomats in Kabul were relocated from the country, and the embassy compound was shuttered. The core remaining personnel have relocated to the Hamid Karzai International Airport, where they are urgently working to evacuate American citizens, SIV applicants and other vulnerable Afghans.