Every US coronavirus death is preventable, health expert says 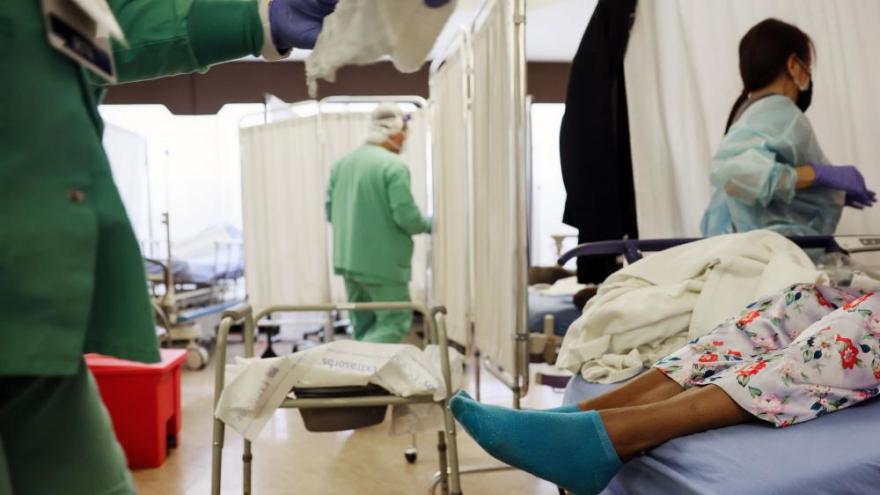 (EDITORIAL USE ONLY) Clinicians care for patients in the former lobby of Providence St. Mary Medical Center, which has been converted into a care space to treat suspected COVID patients, amid a surge in COVID-19 cases in Southern California on December 23, 2020 in Apple Valley, California. The 213 bed capacity hospital in San Bernardino County is currently treating at least 140 COVID 19-positive inpatients while operating at approximately 250 percent of ICU capacity. Southern California remains at zero percent of its ICU (Intensive Care Unit) bed capacity amid the spike in coronavirus cases and hospitalizations.

(CNN) -- The sad part about the thousands of Americans that will die in the coming weeks of the coronavirus pandemic is that they don't have to have to happen, according to one health expert.

"Every death that we're talking about this afternoon is preventable," Dr. Peter Hotez, dean of tropical medicine at Baylor College of Medicine, told CNN on Thursday. "None of this has to happen.

"We have the ability to stop these deaths, getting vaccines out, keeping masks on, social distancing. We just have to get everyone to hang in there a few more weeks."

As of Thursday afternoon, more than 328,000 people in the United States have died from Covid-19, according to Johns Hopkins University.

"We can still save lives," Hotez said. "No one has to lose their lives over the next few weeks and months. It's a tough message to get across, though."

The administration of Covid-19 vaccines is "amazing news," but people need to be aware that it will be a while before everyone is protected, said CNN medical analyst Dr. Leana Wen.

"I do think there is a false sense of security that people are thinking, 'Well, vaccines are here,'" she said. "And while that's amazing news, we also know that it will take some time."

"It will take maybe a half year or more for us to get to herd immunity in this country," she said. "In that meantime we still have to really double down and do the masks, physical distancing, avoiding indoor gatherings."

Herd immunity occurs when a large enough portion of a community becomes immune to a disease, making the spread of disease from person to person unlikely, according to the Mayo Clinic.

Dr. Anthony Fauci estimated that 70-85% of the population needs to get vaccinated against the novel coronavirus to achieve herd immunity.

"This is purely an estimate," Fauci said. "I don't want anyone to go bonkers over this. These are all estimates."

Several factors go into estimating what percentage of the population needs to be vaccinated to achieve herd immunity, including the rate of spread of the virus and the effectiveness of the vaccine.

The Moderna and Pfizer vaccines are about 95% effective against coronavirus.

More than 1 million people have received their first shot of a Covid-19 vaccine, but an influential coronavirus model projects the US death toll will climb well over a half million, topping 567,000 by April 1.

The latest projection from the University of Washington's Institute for Health Metrics and Evaluation notes that number could explode further to 731,000 by April 1 if states ease mandates aimed at containing the novel coronavirus.

The latest IHME model comes as the US has put its hopes in the rollout of its recently authorized Covid-19 vaccines. Operation Warp Speed has distributed about 9.5 million doses and administered at least 1 million doses as of early Wednesday, according to data from the US Centers for Disease Control and Prevention.

"With cases of Covid-19 continuing to surge nationwide, this achievement comes at a critical time and will help to protect those on the front lines -- our health care providers treating COVID-19 patients -- as well as our most vulnerable: elder individuals living in nursing homes and assisted living facilities," CDC Director Dr. Robert Redfield said.

The vaccinations can't come too soon for California, which became the first state to hit 2 million coronavirus cases late Wednesday -- more than all but a handful of countries -- less than six weeks after the state hit 1 million cases on November 12. Given the state's population of 39.5 million, about 1 out of every 20 people in California has tested positive for the virus.

The state's 7-day positivity rate now stands at 12.6%, a slight decrease from previous weeks. However, 55 of California's 58 counties remain in the most restrictive purple tier of the state's Covid-19 reopening system, which have resulted in the closure of many nonessential indoor business operations.

Gov. Gavin Newsom has attributed the recent surge in cases to people relaxing their physical distancing efforts and gathering with people outside of their households, especially during the holidays.

A total of 23,558 Californians have died of complications from the disease since the start of the pandemic.

'We have an end in sight'

In all, the US reported 228,131 new cases of the coronavirus and 3,359 new deaths on Wednesday, the third-most deaths in a single day. That is a devastating "normal" for the US, which has averaged about 215,000 new cases and over 2,700 new deaths every day over the past week.

Several states, including Arkansas and Georgia, reported a record number of cases Thursday. Arizona and Mississippi each had an all-time high number of Covid-19 patients in hospitals.

Dr. Andrew Pastewski, the intensive care unit medical director at Jackson South Medical Center in Miami, attributed the surge in cases at his hospital to Thanksgiving.

"And with the upcoming holidays, we are very scared about what we're about to see," he told CNN's Erica Hill.

But with the vaccine, "we have an end in sight," Pastewski said.

The government has said it intends to distribute 20 million first doses of the Pfizer-BioNTech and Moderna vaccines in the coming weeks, slightly later than it had originally planned.

"It's been a big week of delivery of vaccines," Gen. Gustave Perna, chief operating officer of Operation Warp Speed, told reporters Wednesday. "Over 7,800 deliveries by the end of tomorrow, as we are delivering the 7.9 million doses of vaccine that were allocated for this week around the country -- really a tremendous feat."

Perna said about 15.5 million doses of vaccine have been allocated and another 4.5 to 5 million will be allotted next week.

"We'll finish those deliveries in the first week of January," he said.

In addition, health care workers have found that the Pfizer vaccine, a frozen solution that is diluted with saline before it is given to people, can yield more than the initially thought five doses.

As such, Perna said that the ancillary kits shipped along with the vaccine are being adjusted with extra supplies to accommodate a possible sixth dose.

"We have adjusted our contract and our construction of the kits to ... provide even more capability as we go forward," Perna said Wednesday.

He noted that the kits already had a bit of "extra capability" built in, and that right now most of the administration of the vaccine is occurring in hospitals "where they have access to syringes and needles accordingly."

"So, feel very comfortable with the availability of syringes and needles and our ability to put these kits together and continue the simultaneous distribution of the kits with the vaccine," he said.