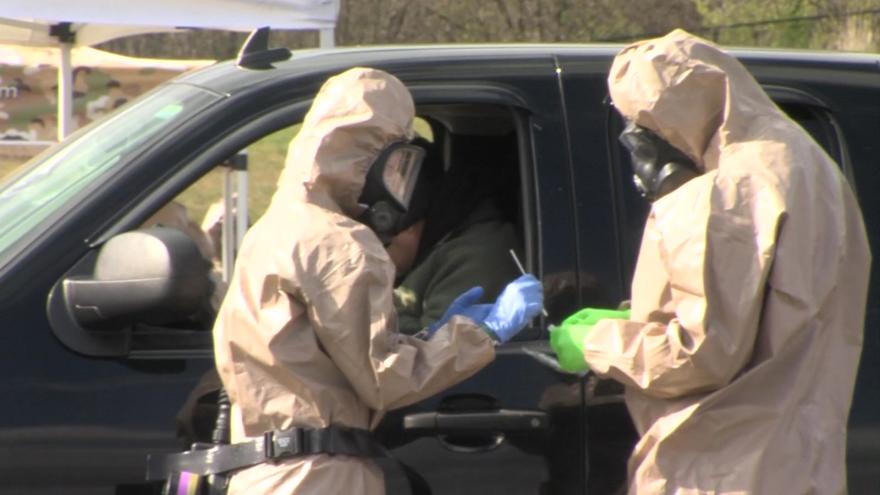 America exceeded that mark on Sunday, just six days after it reached 18 million. The nation's case numbers have more than doubled in less than two months.

COVID-19 deaths in the U.S. also have been rising, and now total more than 332,000. That's more than one death for every 1,000 Americans. The U.S. population as of Saturday was about 331 million, according to the U.S. Census Bureau.

The United States accounts for about 4% of the world's population, but close to 24% of its total coronavirus cases and 19% of its COVID-19 deaths. Health experts believe many cases have gone unreported, however, both in America and internationally.

The EU has launched a huge vaccine rollout., aimed at projecting a unified message that the vaccine is safe and Europe's best chance to emerge from the pandemic and the economic devastation of lockdowns. South Africa became the latest country to reach 1 million confirmed cases and is expected to go back to more virus restrictions. In the U.S., unemployment benefits have expired for millions as President Donald Trump appears no closer to signing an end-of-year COVID relief and spending bill, despite urging from lawmakers from both parties. America's top infectious disease expert expects the general U.S. population will be getting immunized widely by late March or early April. The outlook is much bleaker for many poorer nations, where war and instability are posing huge challenges to vaccination plans.

The country's new variant of the coronavirus, 501.V2, is more contagious and has quickly become dominant in many areas of the resurgence, according to experts.

With South Africa's hospitals reaching capacity and no sign of the new surge reaching a peak, Ramaphosa is expected to announce a return to restrictive measures designed to slow the spread of the disease.

"We are not helpless in the face of this variant," infectious disease specialist Dr. Richard Lessells told The Associated Press. "We can change our behavior to give the virus less opportunities to spread." He said it's most important to avoid contact with others in indoor, enclosed spaces.

JERUSALEM __ Israel has entered its third nationwide coronavirus lockdown – with much of the economy again shutting down as infection numbers surge.

Prime Minister Benjamin Netanyahu says the lockdown will be for two weeks, though it could be extended if infection rates don't come down. But with the country simultaneously pressing ahead with an aggressive vaccination campaign, he is optimistic Israel will be able to lift its pandemic restrictions soon.

Israel, a country of 9 million people, started rolling out coronavirus vaccinations last week and has already inoculated 280,000 people, according to the Health Ministry. That makes it one of the world's leaders in administering vaccinations on a per-capita basis.

The lockdown that began Sunday includes the shutdown of most non-essential businesses, limitations on gatherings and movement from people's homes and reduced public transit. Schools and kindergartens will remain open for the time being.

Israel has recorded over 400,000 cases of the coronavirus since March, and more than 3,220 deaths. But the infection rate has shot up in recent weeks after the government started easing restrictions put in place in September.

ISTANBUL— Turkey's health minister says a shipment of vaccines from Chinese biopharmaceutical company Sinovac has been delayed in Beijing customs.

Minister Fahrettin Koca tweeted Sunday that a COVID-19 case in Beijing customs and high alert against infections there caused the delay.

The minister had said earlier this week the first shipment of CoronaVac would be en route to Turkey Sunday night. He said the delay would be "one or two days."

The vaccines were initially expected to arrive after Dec. 11. Turkey has signed a deal for 50 million doses of the vaccine.

ROME — Italy added another 305 victims to its official coronavirus death toll on the same day it joined the rest of the European Union in launching a massive vaccination campaign.

Another 8,913 people tested positive Sunday, far fewer than in recent days. But with the Christmas holiday weekend, far fewer tests were conducted.

Italy leads Europe in the official COVID-19 death toll with 71,925 victims, though officials say the true toll is far higher due to missed infections early on and testing limitations.

Italy on Sunday began administering the first Pfizer-BioNTech vaccines to health care workers who have been on the front lines of the pandemic since Italy in late February became the epicenter of the outbreak in Europe.

PARIS — France started its first coronavirus vaccinations Sunday at a nursing home northeast of Paris, in one of the country's poorest regions, as part of a Europe-wide vaccination rollout.

"An intense moment, carrying so much hope," tweeted the head of the Paris region public health service, Aurelien Rousseau.

A 78-year-old woman identified only by her first name, Mauricette, was given France's first vaccine shot in the town of Sevran. Later in the day, vaccinations will be given at the Champmaillot home in Dijon.

Polls suggest that people in France are a bit skeptical of the new vaccines, so France's government has been cautious in its messaging and is not making the vaccines obligatory. The government hopes to be able to vaccinate up to 27 million of its 67 million people by summer.

Between 60% to 70% of first responders are expected to receive the voluntary coronavirus vaccine.

ROME __ European Union nations kicked off a coordinated effort Sunday to give COVID-19 vaccinations to the most vulnerable among the bloc's nearly 450 million people, marking a moment of hope in the continent's battle against the worst public health crisis in a century.

Health care workers, the elderly and leading politicians got some of the first shots across the 27-nation bloc to reassure the public that the vaccinations are safe and represent the best chance to emerge from the pandemic.

"It didn't hurt at all," said Mihaela Anghel, a nurse at the Matei Bals Institute in Bucharest who was the first person to get the vaccine in Romania. "Open your eyes and take the vaccine."

In Rome, five doctors and nurses wearing white scrubs sat in a semi-circle at the Spallanzani infectious diseases hospital to receive their doses.

Top officials attended as Branka Anicic received the vaccine before cameras. She says it felt great to be the first in Croatia to receive the vaccine and urged others to do the same.

Croatia's Prime Minister Andrej Plenkovic says the vaccines first will go to those who are the most vulnerable and exposed to the virus. He expressed hope most people will agree to vaccination.

Croatian media have reported that many among Croatia's 4.2 million people remain skeptical regarding the vaccines, even among doctors. Authorities have launched a campaign to encourage people to get vaccinated.

MADRID— Two women, a 96-year-old resident and a worker at a nursing home, became the first Spaniards to receive the coronavirus vaccine on Sunday morning.

The Los Olmos nursing home is located in Guadalajara near the distribution hub that vaccine maker Pfizer has in central Spain 70 kilometers (43 miles) northeast of Madrid.

"Let's see if we can all behave and make this virus go away," said Araceli Hidalgo, the elderly resident, after receiving her injection.

"I am proud (to receive the vaccine)," said Mónica Tapias, the 48-year-old worker. "What we want is for as many people as possible to get vaccinated. We have lost some residents here to COVID, and that has been very sad. Let's see if this can finally finish with this."

Army trucks escorted by police cars left the company warehouse before sunrise to distribute loads of the vaccine to all the regions of mainland Spain. Military airplanes or helicopters flew crates of doses to Spain's Canary Islands, Balearic Islands, and its north African enclaves of Ceuta and Melilla.

PRAGUE — Prime Minister Andrej Babis has kicked off the coronavirus vaccination in the Czech Republic.

Babis became the first Czech to receive a shot of the vaccine in Prague's military hospital during the Czech public television's live broadcast on Sunday morning.

"There's nothing to worry about," Babis told reporters before a ceremonious start of the vaccination program. "Everything's fine," he added after getting a shot.

World War II veteran, the 95-year-old Emilie Repikova, sitting next to the prime minister, was the second.

The medical personnel in four hospitals in Prague and two in the second largest city of Brno will get vaccinated by the first batch of almost 10,000 vaccines by Germany's BioNTech and American drugmaker Pfizer in three days. The second batch of 19,500 vaccines expected to arrive next week will be distributed in all regions across the country.

SEOUL, South Korea __ South Korea has decided not to immediately enforce its toughest distancing rules in the greater Seoul area despite a surge in fresh infections.

The Seoul area, which has been the heart of a recent viral resurgence, is currently under the second highest distancing rules. There have been calls for raising the restrictions to the highest level as the current curbs haven't showed much significant effects. But the government was reluctant to do so because of worries about the economy.

Health Minister Kwon Deok-cheol said Sunday the government will maintain the current level restrictions in the Seoul area until Jan. 3 and that it'll see how the outbreak develops this week before determining whether to adjust the curbs. He says the third highest level of distancing rules imposed in other regions will also remain in place until Jan 3.

Kwon says South Korea has logged an average of 999 new cases each day last week, 690 of them in the Seoul area.

DUBAI, United Arab Emirates — The Persian Gulf state of Oman has launched its COVID-19 inoculation campaign, with the sultanate's health minister receiving the first dose of the Pfizer vaccine.

State-run media reported that the first batch of 15,600 doses was flown in industrial freezers to Muscat International Airport last week to vaccinate a priority group of older adults, health care workers and those with underlying health conditions starting on Sunday.

Another 28,000 doses of the vaccine by American drugmaker Pfizer and its German partner BioNTech are expected to arrive next month.

Oman says it aims to vaccinate 60% of its roughly 5 million people.

TOKYO — Japan is barring entry of all non-resident foreign nationals as a precaution against a new and potentially more contagious coronavirus variant that has spread across Britain.

The Foreign Ministry says the entry ban will start Monday and last through Jan. 31.

Last week, Japan banned non-resident foreigners coming from Britain and South Africa after confirming the new variant in seven people over the last two days — five from Britain who tested positive at airports and two others in Tokyo.

Japan is also suspending the exemption of a 14-day quarantine for Japanese nationals and resident foreigners that began in November. The entrants now must carry proof of a negative test 72 hours prior to departure and self-isolate for two weeks after arrival.

Japan is struggling with surging cases since November. It has confirmed a total of 217,312 cases including 3,213 deaths, up 3,700 from the previous 24-hour period. Tokyo alone reported 949 cases, setting a new record, despite calls by experts for people to spend a "quiet" holiday season.

TORONTO — Officials in Canada's most populous province have confirmed the first two known Canadian cases of a more contagious variant of COVID-19 that was first identified in the United Kingdom.

The province's associate chief medical officer says that the cases are a couple from Durham Region, just east of Toronto, with no known travel history, exposure or high-risk contacts.

The new variant is believed to spread more easily and faster than the original version of the disease but is not believed to be more deadly.

The provincial government said in a news release that is no evidence to suggest that the vaccines approved by Health Canada will be any less effective against the new variant.