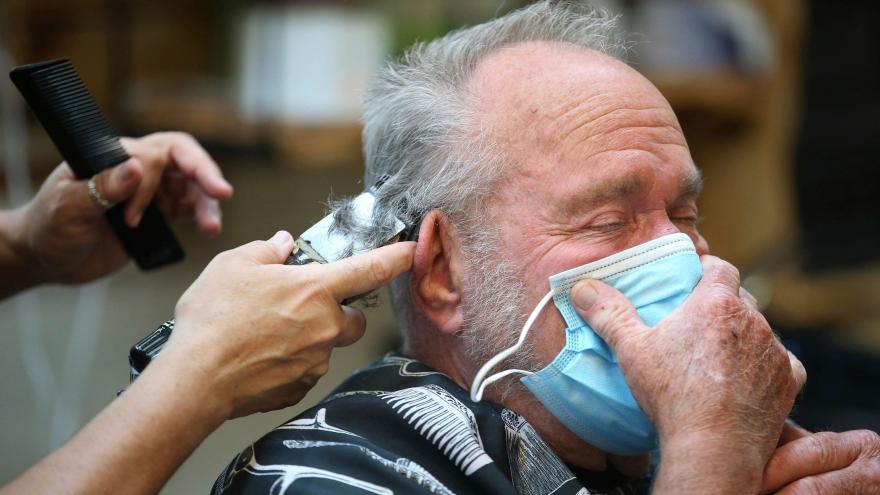 (CNN) -- This week will mark several new milestones in the coronavirus pandemic, as the number of US cases nears 1 million and businesses in some states will reopen.

A University of Washington model frequently cited by the White House coronavirus task force suggests no state should open their economies before Friday -- and many should wait much longer.

But some parts of the country are already doing so -- even if some cities and states are at odds with each other.

But Florida Gov. Ron DeSantis said he's not putting a date on when the state will reopen, even though its stay at home orders are set to expire Thursday.

Other states have already started reopening, including Georgia, Texas, Michigan, Hawaii and Alaska.

But New York state won't be lifting restrictions this week, despite declines in the rates of hospitalization, intubation and deaths, Gov. Andrew Cuomo said Sunday.

The earliest the state will begin its first phase of reopening is May 15, but only in places that have seen a 14-day decline in hospitalizations, Cuomo said.

He said the state's multiphase reopening will start with construction and manufacturing at "businesses that have a low risk."

Reports of overexposure to disinfectants increase

Several states are grappling with a new problem: a surge in calls to their poison control centers.

The calls came after President Donald Trump's spoke about the possibility of injecting or ingesting disinfectants during a White House news conference Thursday. Trump later said he was being "sarcastic."

Maryland has received hundreds of calls from people asking if they can effectively fight coronavirus by injecting or ingesting disinfectants, Gov. Larry Hogan told CBS' "Face the Nation" on Sunday.

Michigan had 65 reported overexposure cases between April 1 and April 25 -- a 400% increase from the same time last year.

In Tennessee, in addition to cleaning supply overexposure, the state's poison control center has seen a jump in the number of people hospitalized from exposure to hydrogen peroxide -- a common ingredient in disinfectants, according to The Tennessean newspaper.

In Illinois, calls to poison control included someone who used a detergent based solution for a sinus rinse and another who gargled a mixture of mouthwash and bleach to kill germs, Illinois Public Health Director Dr. Ngozi Ezike said.

Researchers are looking into possible treatments

Preliminary results of a clinical trial for heartburn medicine in coronavirus treatment could come in the next few weeks, said Dr. Kevin Tracey, president of Feinstein Institutes for Medical Research at Northwell Health.

"We don't know if it has any benefit. We really don't. I swear we don't," he said. "People are hoping for anything. But we need to do this clinical trial."

Separately, preliminary results for a clinical trial of the experimental antiviral drug remdesivir could come out in a week or two, said Dr. Andre Kalil, a principal investigator in the trial. But final results are not expected until mid-to-late May.

And in Florida, at least two patients are seeing "drastic improvements" after convalescent plasma transplants, which uses the antibodies from recovered patients to treat those who are currently sick, physicians at an Orlando hospital said.

In Boston, Mayor Martin Walsh said 1,000 asymptomatic residents will undergo diagnostic and antibody testing to evaluate exposure to the virus in the city. The testing is expected to be done by Friday.

But health officials stress it's not clear whether having antibodies to this novel coronavirus means someone will have long-term immunity from reinfection.

The US is 'close to the edge' with meat supply

The US food supply has taken another hit form the pandemic as a Wisconsin meat production plant shuts down.

A JBS USA beef production plant in Green Bay will temporarily closedue to the pandemic, the company said Sunday.

The county where the plant is located has at least 776 confirmed cases and two deaths from coronavirus.

Processing plants and slaughterhouses have shut their doors recent weeks.

"It is impossible to keep our grocery stores stocked if our plants are not running," Smithfield Foods CEO Ken Sullivan said.

"The closure of this facility, combined with a growing list of other protein plants that have shuttered across our industry, is pushing our country perilously close to the edge in terms of our meat supply."