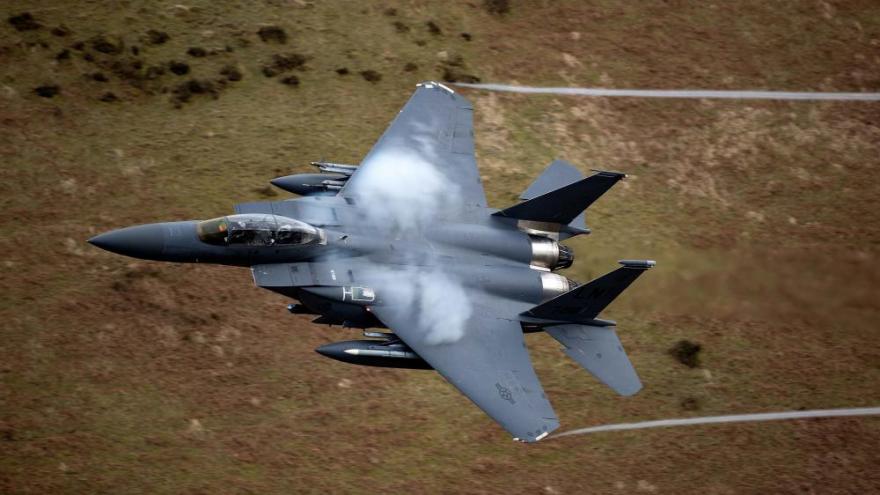 The US military on Thursday confirmed that one of its F-15 fighter jets had flown within a few thousand feet of an Iranian commercial aircraft over Syria to "inspect it," after Iranian state media released videos showing apparently shaken and injured passengers.

(CNN) -- The US military on Thursday confirmed that one of its fighter jets had flown within a few thousand feet of an Iranian commercial aircraft over Syria to "inspect it," after Iranian state media released videos showing apparently shaken and injured passengers.

A US F-15 conducted a "standard visual inspection" of the privately owned Iranian jetliner at a close distance of about 1,000 meters (some 3,300 feet), a spokesman for Central Command, the US military command responsible for the Middle East, said in a statement.

The fighter jet flew close to the Iranian aircraft because it appeared "to have deviated from" an established commercial air corridor, a US defense official told CNN Friday.

The official also said after a review of flight data the US calculated the closest the F15 came to the airliner was actually about 1,500 meters, instead of the earlier estimate of 1,000 meters.

Several passengers were injured in the incident, according to Press TV. The Mahan Air flight was flying from Tehran to Beirut, state media reports.

Iranian national broadcaster IRIB described the US maneuvering as a "provocative" action that had forced the passenger plane's pilot to abruptly lower altitude.

A defense official told CNN there were two US F-15's in the air, but that only one was sent to make the visual identification.

The CENTCOM spokesman said the inspection had occurred near a garrison used by the US-led coalition fighting ISIS, At Tanf, a small outpost in Syria near the Iraqi-Jordanian border that has been the scene of clashes between US and pro-regime and Iranian forces.

"The visual inspection occurred to ensure the safety of coalition personnel at At Tanf garrison. Once the F-15 pilot identified the aircraft as a Mahan Air passenger plane, the F-15 safely opened distance from the aircraft," the statement said. "The professional intercept was conducted in accordance with international standards."

In a statement, Iranian Foreign Ministry spokesman Abbas Mousavi said, "The incident is under investigation. Due political and legal measures will be taken upon completion of the information at hand," Press TV reported.

Iran's Ambassador to the United Nations had an "emergency phone conversation" with the UN Secretary-General Thursday to discuss the incident, a spokesman for the Iranian Mission to the UN said in a tweet.

Ambassador Majid Takht Ravanchi "reiterated that in the event of any incident occurring during the aircraft's return flight to Iran, Iran will hold the US accountable," Alireza Miryousefi posted Thursday evening, adding Iran is planning to send an official letter on the matter to Secretary-General Antonio Guterres and the UN Security Council.

"U.S. illegally occupies territory of another State and then harasses a scheduled civil airliner—endangering innocent civilian passengers—ostensibly to protect its occupation forces," he said in a tweet re-posted by the Iranian Mission Friday.

"Audacity to compound lawlessness upon lawlessness. These outlaws must be stopped before disaster," he wrote.