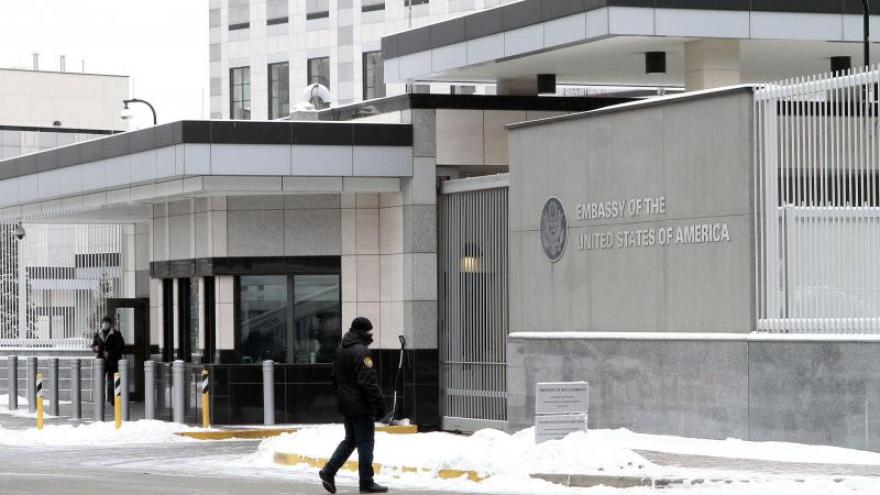 The United States is closing the US Embassy in Kyiv and moving remaining diplomats to western Ukraine amid fears of Russian invasion.

(CNN) -- The United States is closing the US Embassy in Kyiv and "temporarily relocating" the small number of remaining diplomatic personnel in the country to Lviv, a city in western Ukraine, "due to the dramatic acceleration in the buildup of Russian forces," Secretary of State Antony Blinken announced Monday.

"I have ordered these measures for one reason -- the safety of our staff -- and we strongly urge any remaining US citizens in Ukraine to leave the country immediately," Blinken said in a statement.

The moves comes days after the US ordered the vast majority of US government employees to leave the country and announced that consular services at the US Embassy would be suspended as of Sunday amid fears of an imminent Russian invasion, even as US officials stressed they remain committed to trying to find a diplomatic outcome.

Although Moscow has said it is open to negotiation, State Department spokesperson Ned Price noted Monday that "it remains unclear to us whether Russia is interested in pursuing a diplomatic path as opposed to the use of force."

A source familiar with the matter told CNN that a Russian attack on Ukraine sometime this week is more likely than not. But if Russia does not make a move this week, the source noted, it does not necessarily mean it won't happen -- Russia can maintain its current force posture for quite some time.

Price said the decision to move all remaining diplomats from Kyiv to western Ukraine was made because the State Department felt it was "absolutely necessary" due to the "distinct possibility, perhaps more real than ever before, that Russia may decide to proceed with military action."

"We are basing our assessment on what we are seeing on the ground with our own eyes, which is a continued and unprovoked Russian buildup on the border of Ukraine and no accompanying evidence of de-escalation," he said at a briefing at the State Department, noting that Lviv's location "affords it a degree of protection that other places in Ukraine may not have."

Price said there had been "great deal of meticulous planning that went into" relocating the embassy "and as a testament to that, for example, we did not have to destroy any valid passports."

"We have undertaken prudent precautions when it comes to sensitive documents, sensitive equipment, but just can't offer a whole lot of detail there," he said.

A senior State Department official said Saturday that US diplomats had gotten rid of classified information in recent days in preparation of the embassy draw down.

Price noted that if Russian President Vladimir Putin decides to invade Ukraine, "There would be widespread human suffering."

US officials have repeatedly called on American citizens to leave Ukraine immediately, warning that a Russian invasion come at any moment, including as soon as this week.

"What we are trying to do publicly is be transparent to American citizens that they should leave Ukraine immediately, because there will not be a military evacuation in the event of an invasion," National security adviser Jake Sullivan said on CNN's "State of the Union" Sunday.

Price said the Ukrainian National Guard Police will guard the US Embassy in Kyiv, adding, "It is certainly our intention to return to that embassy in Kyiv just as soon as it is safe for us to do so." The staff relocated to Lviv include the "core" diplomatic team, including charge d'affaires Kristina Kvien and they "will remain engaged with Ukrainian government coordinating on diplomatic efforts," Price said.

The source familiar told CNN that they believe the gap between the US and Ukraine when it comes to the likelihood of a Russian attack is narrowing -- Ukraine has been skeptical that such an invasion is imminent, but in private conversations they have been more focused on expressing concerns about how the US' warnings about an invasion have impacted them domestically, politically and economically.

Blinken spoke with his Ukrainian counterpart Dmytro Kuleba on Monday -- their second conversation in a matter of days -- and stressed the US and allies' "commitment to the sovereignty and territorial integrity of Ukraine, including its economic and financial stability." The two discussed macro-financial support, according to Kyiv, and the Biden administration is considering offering up to $1 billion in loan guarantees to Ukraine amid concerns over a potential Russian invasion, multiple sources familiar with the matter said.

The US has also had conversations with Moscow in recent days. Blinken spoke with Foreign Minister Sergey Lavrov ahead of President Joe Biden's call with Putin.

"On our call, Foreign Minister Lavrov said that Russians are working on a response to the paper that we sent to Moscow more than two weeks ago, proposing concrete areas for discussion," Blinken said Saturday, adding that "it remains to be seen if they'll follow through on that, but if they do we'll be ready to engage together with our allies and partners."

Earlier in the day, Russian Foreign Minister Sergey Lavrov told Putin he saw a "chance" for diplomatic dialogue with the West over Russia's security concerns, saying he recommended such efforts continue.

As of Monday, the US had yet to receive that response from Moscow, Price said, "and in order for this to bear fruit, it will also have to take place in the context of de-escalation, and that is just not something we've seen to date."