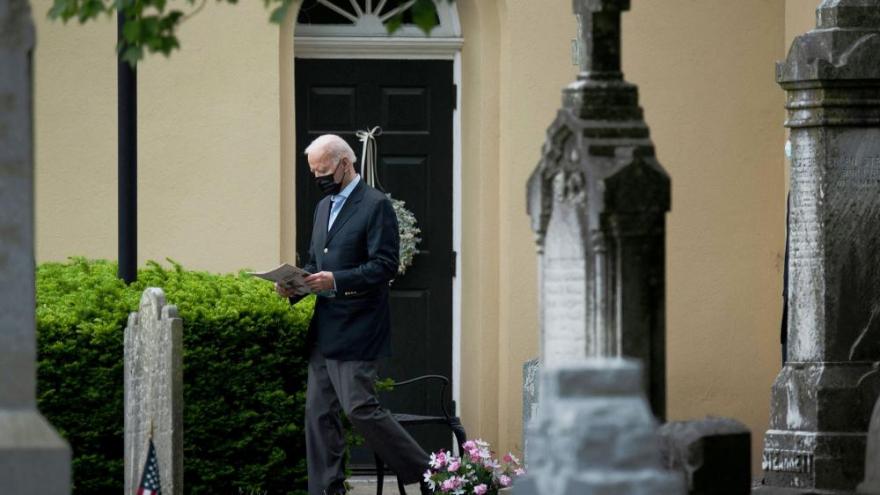 The United States Conference of Catholic Bishops proceeded with a plan that would deny communion to public figures who support abortion rights, setting up a potential public rebuke of President Joe Biden, pictured on May 16, in Delaware.

(CNN) -- The United States Conference of Catholic Bishops on Friday proceeded with a plan that could deny communion to public figures who support abortion rights, setting up a potential public rebuke of President Joe Biden.

By a vote of 168 to 55, with six abstentions, the bishops went forward with plans for a report on the meaning of the Eucharist in the church. The vote is part of a longer process, and a rebuke of Biden and other Catholic politicians who support abortion rights is not assured. The report will be developed over the summer and presented for amendments and approval in November.

The Vatican would have to approve any action on behalf of the bishops, and would likely delay that approval if a pointed report is issued.

Biden, an abortion rights advocate who is the first Catholic US president in nearly 60 years, is the most openly religious president since Jimmy Carter. This movement is driven by the extremely conservative wing of the Catholic Church.

Some bishops want the report to be a broader teaching tool for all Catholics about the importance of the sacrament of communion and they have been reminding their fellows of the Pope's exhortation to avoid divisiveness.

Asked at the end of remarks at the White House Friday afternoon about the vote, Biden replied, "That's a private matter and I don't think it's going to happen."

Pew surveys show more than half of US Catholics favor abortion rights and most American Catholics do not believe Biden should be refused communion.

Catholics for Choice, a liberal Catholic group that advocates for abortion rights, said it was "profoundly saddened" by Friday's vote and condemned using the Eucharist "as a weapon of punishment."

"In a country and church already riven with tension and division, today the bishops chose to be partisan instead of pastoral, cruel rather than Christ-like," the group said. "They have chosen to disobey Jesus's command to 'feed one another,' but everyday U.S. Catholics -- 67 percent of whom oppose withholding Communion and other Sacraments from supporters of abortion rights -- will continue to know better and do better."

Biden has for years been asked to square his devout Catholicism with his politics.

The President has been a regular at Mass since childhood and attended Catholic schools. He married his late first wife, Neilia, in a Catholic church and peppers his political speech with quotes from Scripture, Catholic hymns and references to the nuns and priests he learned from in school.

While Biden has personally opposed abortion on religious grounds, he's also said that he doesn't want to force his opinion on others.

"I accept my church's position on abortion as a what we call de fide doctrine. Life begins at conception. That's the church's judgment. I accept it in my personal life," he said during the 2012 vice presidential debate. "But I refuse to impose it on equally devout Christians and Muslims and Jews. I just refuse to impose that on others," he said.

He added: "I do not believe that we have a right to tell other people, women, that they can't control their bodies. That's a decision between them and their doctor, in my view, and the Supreme Court, I'm not going to interfere with that."

In 2019, Biden was denied communion at a Catholic church in South Carolina over his support for abortion rights.

"I am not going to discuss that. That is just my personal life," Biden said after the incident.

CLARIFICATION: This article has been updated to better reflect the potential outcome of the report the United States Conference of Catholic Bishops approved producing.