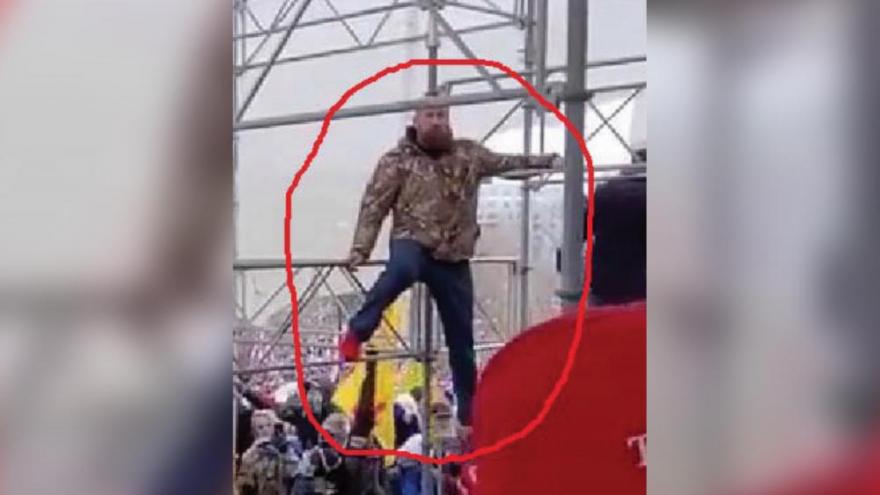 Scott Fairlamb is seen at the US Capitol on January 6, 2021.

(CNN) -- A New Jersey gym owner and former MMA fighter who punched a police officer during the January 6 riot was sentenced to 41 months in prison on Wednesday, becoming the first rioter sentenced for violence against the police during the attack.

Scott Fairlamb pleaded guilty in August to assaulting a police officer and obstructing an official proceeding. He has been in jail since he was arrested in late January and will get credit for the time he has already spent behind bars. Fairlamb was also the first riot defendant to plead guilty to assault.

"It's such a serious offense ... an affront to society and to the law, to have the Capitol overrun and the function of government stopped," said Judge Royce Lamberth, noting that the assault had struck "in the heart of our democracy."

Fairlamb's sentence will likely set an early benchmark for how harshly rioters charged with violence may be punished, and it ushers in a new phase of the US Capitol riot cases, which so far have had only nonviolent defendants sentenced largely to no jail time.

"I truly regret my actions that day. I have nothing but remorse," Fairlamb said in court Wednesday with tears in his eyes as he asked the judge for "mercy."

Fairlamb said he had disappointed his family, including his father, who was a veteran, and noted that since his arrest he has not spoken to his brother who is a Secret Service agent, "out of respect for his position and our government."

"My life got pulled out from under me, and it's no one's fault but myself," he said.

Before handing down the sentence, Lamberth told Fairlamb he had made the right decision in accepting a plea agreement. "Had you gone to trial, I don't think there's any jury that could have acquitted you. ... You couldn't have beat this."

Lamberth said that other January 6 defendants in situations similar to Fairlamb's are "going to get a lot more" time in prison if they go to trial and would be wise to follow Fairlamb's example and plead guilty.

"The way you hit (the police officer) in the face like that, you're fortunate he wasn't injured," Lamberth said.

Fairlamb was also sentenced to 36 months of supervised release following his time in prison and will have to pay $2,000 for damage done to the Capitol.

Before being escorted out of the courtroom, he blew a kiss to his wife, who was sitting in the front row with his sister and mother.

Prosecutors had sought 44 months in prison for Fairlamb, because of his criminal history, photos he had taken with an "AREA CLOSED" sign outside the Capitol -- which prosecutors said showed Fairlamb knew he was not allowed at the building -- and messages to a friend that he'd "go again" to the Capitol.

Body camera footage shows Fairlamb following and yelling at officers on January 6, at one point shouting, "You have no idea what the f**k you're doing." He then shoved and punched the officer in the head, the footage shows.

Prosecutors allege that Fairlamb was one of the first rioters inside the Senate side of the building. Four days after the siege, Fairlamb allegedly tagged Rep. Cori Bush, a Missouri Democrat, in an Instagram post and wrote that he "shoulda lit your ass up," presumably during the attack. The post also contained screenshots of racist and sexist threats against the congresswoman.

This story has been updated with more from the court hearing.