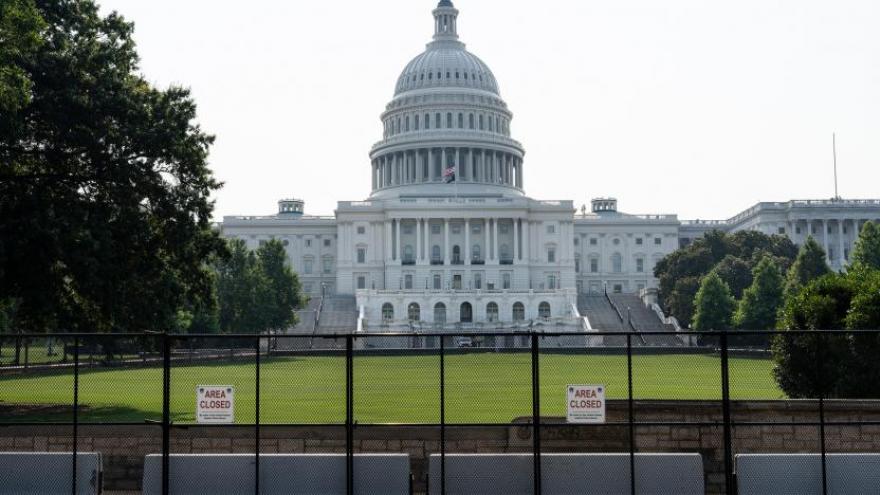 The US Capitol Police formally announced that the remaining fencing around the US Capitol that was erected in the wake of the January 6 insurrection will start to come down.

(CNN) -- The remaining fencing around the US Capitol that was erected in the wake of the January 6 insurrection will start to come down as early as Friday, the US Capitol Police formally announced Wednesday.

In an email obtained by CNN on Wednesday, the US Capitol Police said that "based on the current threat environment, recent enhancements to USCP response capabilities, and enhanced coordination with local, state and federal law enforcement partners, the Capitol Police Board is supporting USCP's recommendation to remove the temporary fencing around Capitol Square."

The Capitol Police Board, which oversees security on the Capitol Campus, needed to give final approval to the removal plans before they could be implemented.

The Capitol Police said in its email that "removal is expected to begin as early as Friday, July 9th and conclude within two to three days, weather permitting."

A weather system moving into the Washington area could affect the removal plans and extend the process into the weekend or early next week, but as of Wednesday, the plan was to begin on Friday, according a source with direct knowledge of the plans.

The Capitol Police noted in the email that the "Architect of the Capitol has the ability to and will reinstall the temporary fencing should conditions warrant." The email added that building access restrictions implemented amid the Covid-19 pandemic will remain in place and bike racks will temporarily be used to restrict access to the Lower West Terrace.

In the weeks after the January 6 insurrection, officials deployed thousands of National Guard troops and installed razor wire and 7-foot fencing to protect the building, turning the US Capitol grounds that had been accessible to the public into a fortress. The unprecedented amount of security on Capitol Hill led lawmakers in both parties to express frustration.

The outer perimeter fencing around the Capitol complex that had blocked off traffic on Independence Avenue and Constitution Avenue was removed in late March.

On April 2, less than two weeks later, a man rammed a vehicle into a police barricade outside the Capitol building, killing one US Capitol Police officer and injuring another.

The US Capitol Police had initially proposed making the fencing permanent, which lawmakers largely pushed back against.

US Capitol Police had told lawmakers in February that the razor wire fencing should remain in place until at least September due to lingering security concerns related to threats against members of Congress, according to a source familiar with the plans.

A task force established in January by House Speaker Nancy Pelosi to review security at the Capitol following the January 6 riot had recommended two different new fencing systems to keep the border of the Capitol secure in a more manageable way. The task force suggested using a retractable fencing system and a mobile system, which should be "easily erected and deconstructed," CNN reported in March.

The task force wrote in the executive summary of its report that the current temporary fencing requires too many personnel to monitor and makes the Capitol complex less accessible.