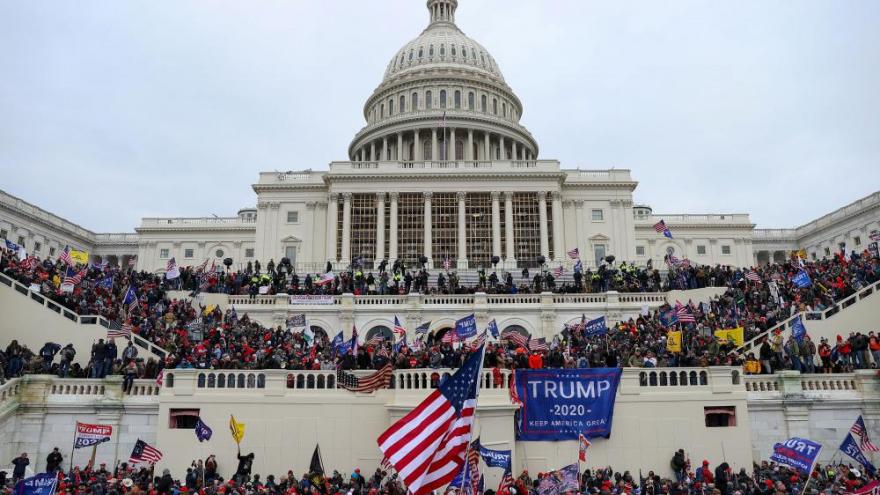 US President Donald Trumps supporters gather outside the Capitol building in Washington D.C., United States on January 06. The United States Capitol Police (USCP) announced that disciplinary action has been recommended in six cases against officers following internal investigations into the January 6 attack on the US Capitol.

(CNN) -- The United States Capitol Police (USCP) announced that disciplinary action has been recommended in six cases against officers following internal investigations into the January 6 attack on the US Capitol.

Violations sustained include three cases for conduct unbecoming, one for failure to comply with directives, one for improper remarks, and one for improper dissemination of information, according to a USCP statement released Saturday. The statement did not specify if the six cases involved six separate officers nor did it name any of them. CNN has reached out to the USCP for clarification.

"The six sustained cases should not diminish the heroic efforts of the United States Capitol Police officers. On January 6, the bravery and courage exhibited by the vast majority of our employees was inspiring," the release said.

The USCP's Office of Professional Responsibility launched 38 internal investigations, and was able to identify the officers involved in 26 of those cases. In 20 of the cases, no wrongdoing was found, according to the statement.

A seventh case regarding an official who is accused of unsatisfactory performance and conduct unbecoming is still pending.

The USCP provided the Department of Justice information on the cases "as part of the ongoing discovery production in the prosecution of the January 6 rioters," and said the US Attorney's Office "did not find sufficient evidence that any of the officers committed a crime," according to the statement.

In February, six US Capitol Police officers were suspended with pay, while 29 others were placed under investigation, for their actions in the January 6 riot, a department spokesman said at the time.

Law enforcement officials are bracing for potential clashes and unrest during an upcoming right-wing rally in Washington, DC, as violent rhetoric surrounding the September 18 event has increased online and counterprotests are being planned for the same day, according to an internal Capitol Police memo reviewed by CNN.

This story has been updated Sunday with the DC US Attorney's Office having no comment.