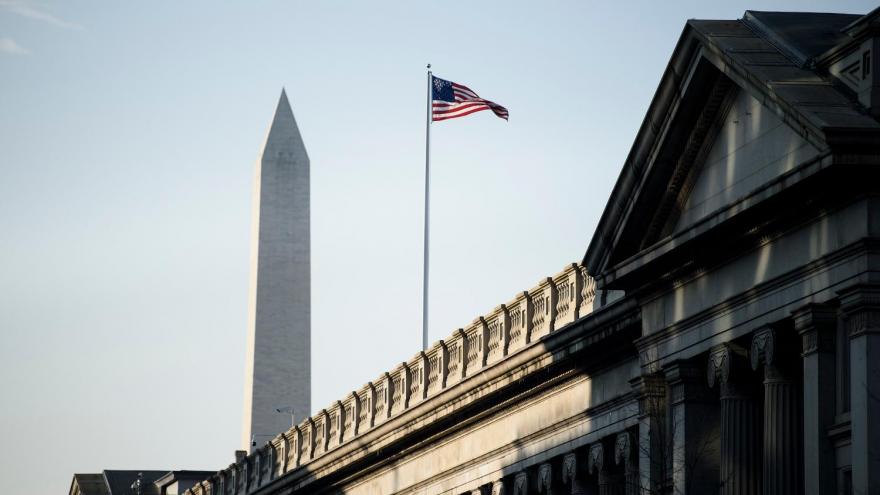 The US budget deficit jumped 23.1% in the first nine months of the fiscal year compared with the same period a year ago, according to the US Treasury. Full credit: Brendan Smialowski/AFP/Getty Images

(CNN) -- The US budget deficit jumped 23.1% in the first nine months of the fiscal year compared with the same period a year ago, according to the US Treasury.

The deficit widened to $747.1 billion, versus $607 billion last year, from October through June. Federal spending rose to $3.36 trillion in that period, while revenue increased to $2.61 trillion -- both records.

The numbers, released Thursday in a monthly report from the Treasury, paint a darkening picture for the US budget as the federal government runs short on credit.

The US has not had borrowing power since March, when the congressionally mandated debt ceiling kicked in, and independent analysts suggest the government could run out of money by September unless Congress can agree to allow additional borrowing.

A number of factors are driving the deficit increase, including the $1.5 trillion tax cuts signed by President Donald Trump in 2017 along with a massive spending package.

The Trump administration is predicting that the budget deficit will likely exceed $1 trillion for the entire fiscal year, which ends on Sept. 30. That's up from $779 billion a year earlier.

That's much higher than forecasts by the nonpartisan Congressional Budget Office, which anticipates that the deficit for the year will reach $896 billion. It expects the deficits will rise above $1 trillion starting in 2022.

Part of the jump in receipts for the period came from a 78% rise in custom duties, which totaled $52 billion so far for the budget year. The Trump administration has slapped tariffs on $250 billion in Chinese goods, and it escalated those economic penalties from 10% to 25% in May after trade talks collapsed.